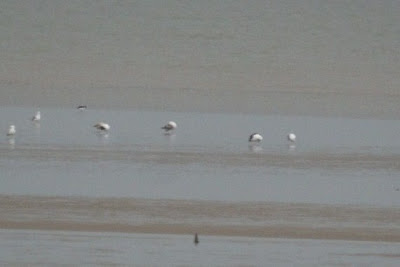 I spent 3 hours at Pegwell Bay this morning scanning through a massive roost of gulls , hundreds in fact and my target birds were Caspian and Yellow legged gulls , constant rain showers and the distance of the gulls made the viewing fairly challenging , i always get a buzz from scanning through gull roosts because you never know what you might come across , it was nice to sit in the dry and comfort of the hide , my first scan through was long and laborious but a probable adult Yellow-legged gull was seen , however although it looked darker on the back , somewhere between Herring and Lesser black-backed.  the head shape was slightly wrong and at that range the leg colour could not be confirmed  . 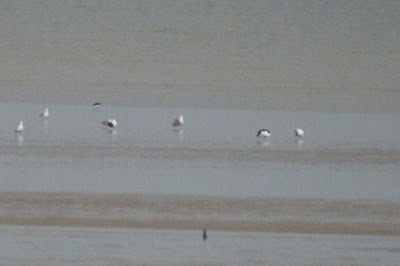 On my second scan through i came across a superb 1 st winter Caspian Gull , high breasted , very white  pear shaped head , it had the classic small dark eye although at that range the colouration would not have shown , all black bill , very long legged , white tipped brownish tertials and black primaries were all easily seen , it also had the dropped lower rear belly , the photos really are bad i know and they just don't do the bird any justice at all , at one point it stretched its left leg and the length was quite amazing , you can just about make the very long legs out in the second photo , it spent most of the time preening . 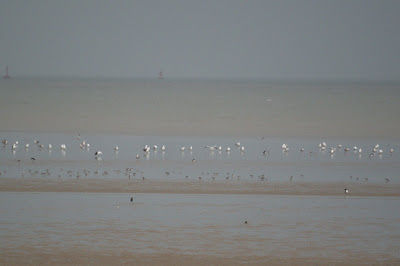 Mixed gulls and waders going out with the tide.

Several species of wader were seen also today including , approx 75 Bar Tailed Godwits , Grey Plover, Dunlin , Redshank , Curlew and Oystercatcher , also a Sparrowhawk did a rather quick fly through . 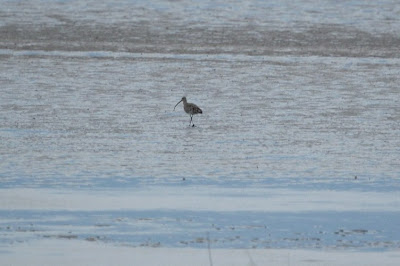 So all in all a very rewarding 3 hours spent doing some local birding ( for a change ..lol ) 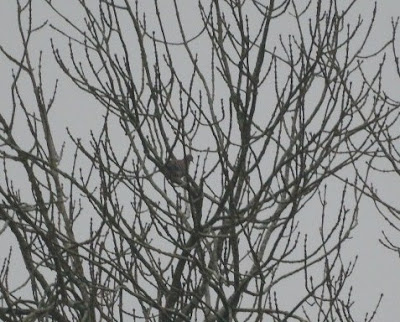 An early start saw me  heading to Chipping Norton on Saturday the 19th Feb in the hope of seeing the Rufous Turtle Dove that had taken up residence there on and off since December 2010 , the journey was uneventful and i duly arrived on site at approx 6.30 am , the weather was constant drizzle and i headed of to The Leys to join the already gathered queue of approx 100 other birders , it felt quite weird standing in the queue of this road  god knows what the local residents thought when they opened their curtains ???  and as time went on the queue kept growing and growing , i think at its peak there must of been 400 birders there , the rain was getting heavier and after 2 hours i felt like a drowned rat , the news was negative from No. 41 where the dove was seen most mornings , oh joy getting up at 3 am driving all this way standing in a road for 2 hours getting soaked !!!  i must be mad , oh wait i am !!!

Anyhow whilst i was debating whether i should go off and check out other areas were the dove had been seen from hence giving up my place in the queue or should i just wait it out just in case ?!  the news broke the dove was seen on top of a tree between No41 and 39 , well it was nothing short of a stampede ,  total madness no order nothing , and i was more or less carried along with the crowd , some how i was near the front so i crouched down out of the way when another birder bumped into me knocking me over , then i tried to set my scope up while kneeling down only to find someone standing on my straps . total madness eventually i managed to set the scope up and was soon enjoying the Roufous Turtle Dove ( form Orientalis ). 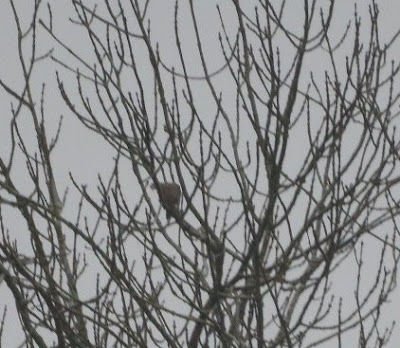 The dove eventually flew off and was then re found in tree at the bottom of the Leys in a field and the madness started all over again ,  i got myself in a goodish position to view the dove , notable features were the white tipped median and greater coverts giving it a scaly appearance , the upper breast and belly were fairly dark , the pale head with smallish red eye were noticeable , i never really got a great view off the tail but i did notice the whitish tipped tail edgings did nt seem as extensive as normal Turtle Dove , the neck markings were evident every now and again , red legs were also seen , overall a very compact dove and despite the total madness of the occasion and the weather being awful it was well worth the journey on are return journey we added 6 Red Kites .

On Sunday the 20th Feb. i headed off to Rainham marshes in the hope of seeing Britain's first Slaty Backed Gull , this bird has been giving birders the run around turning up at Pitsea , Hannigfield res. and of course Rainham , also it has gone missing for weeks on end , so i was hopeful more than expectant of seeing this bird , i arrived at Rainham and i was informed  that the rubbish tip doesn't work on Sundays and therefore the gull has not been seen here on Sundays as it only comes in to feed at the tip and then rest up on the marsh , not the news i had hoped for to be honest , but my thoughts were well it has to be somewhere and although the tip is closed there is still going to be food waste there for any gulls to feed on , i headed off towards  Wennington marsh and the rubbish tip along the sea wall adding Wigeon , Teal and 100 + Dunlin , plus 11 Avocets were a nice  to see , i got  onto a small falcon flying over the river from Crayford marsh heading in land and i soon identified it as a Merlin  !

I reached Wennington marsh and there were not many gulls about to be honest , although there were several large gulls flying inland most of the time , i joined 3 other birders and they informed me that they had not seen it , i checked through the gull roost in the middle of the marsh which were very distant ,   as i was getting nearer to the tip i noticed a closer roost of large gulls and i started to scan through the flock , as i was scanning a large gull flew across and landed in my view , very broad white secondaries just hit me , long legged , darkish grey wings ,white head with streaking on the nape , deep fierce bill,  my god it was the SLATY BACKED GULL i quickly got  another birder onto it, we watched it for about 10 mins , wow i could not believe my luck , then the gulls all took up some went left and right and it was lost to view the murky conditions were awful , i couldn't decide to put the news out or wait until i picked it up again , we were joined by 3 other birders and we all started to scan for it again , and thankfully another birder picked it up again , i then put the news out at 12.14 pm and the Slaty Backed Gull was then seen for most of the afternoon , and like my title says , ( Like buses ) i have been waiting ages for one lifer now i have had two in a weekend !!!!!.
Posted by Robs Birding at 03:29 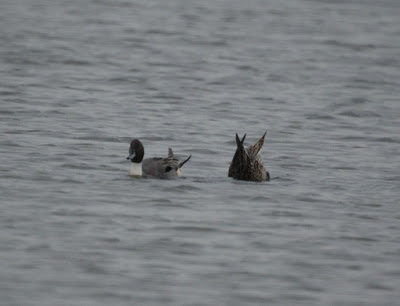 A couple of hours spent at Oare Marshes today was quite productive , i started of looking over the East Flood and soon encountered several Pintail quite close in plus most of the regular ducks were seen , huge numbers of Lapwing were present on the mud flats but not much else in the terms of waders . 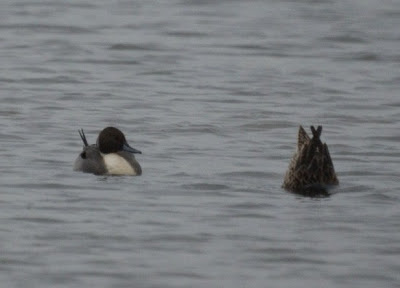 I made my way down to the car park and instantly heard a Cettis Warbler which was the first of my 3 year ticks this morning , making my way along the sea wall i encounted good numbers of Dunlin and Redshank with a small scattering of Grey Plover amongst them , Curlew and Oystercatcher were also added and several hundred Dark Bellied Brent Geese were seen on the Swale i also added approx 150 Avocets near the sea watching hide and there were 8 Common Seals out on the sand bar.

I continued my walk past the sea watching hide and along Faversham creek not really adding much else other than a male Marsh Harrier drifting slowly over the East Flood spooking all the Lapwings and various ducks , this was followed by a fly over Grey Heron and then i heard then saw my second year tick of the day as 2 Bearded Tits flew over the nearby reed bed . 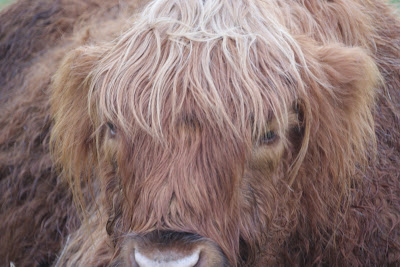 And i thought i need a haircut !! 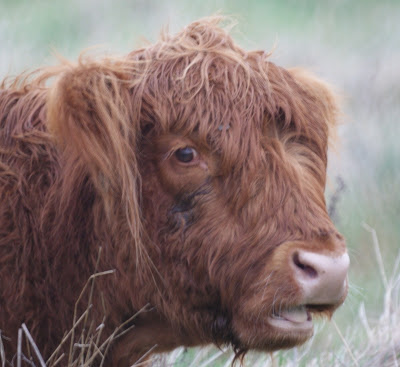 This is what i look like after i have dipped !!!

I encounted the above cattle on my walk around past the back of the East flood hide and just could not resist a photo or two ...lol , i bumped into Murry Wright on my back towards my car and we exchanged notes and he kindly informed me of a Spoonbill on the other side of the Swale although a bit distant well worth a look , we said are goodbyes and of i went in my quest to see it , after about 15 minutes i managed to pick it out along side a Little Egret , the Spoonbill was my third year tick of the day and although it was very distant a much welcome bird and i then set of for home and a nice mug of coffee . 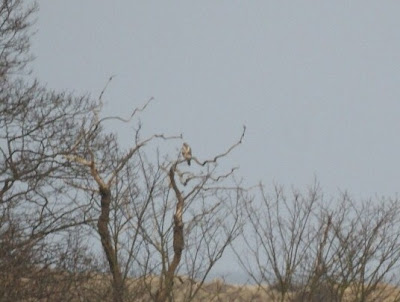 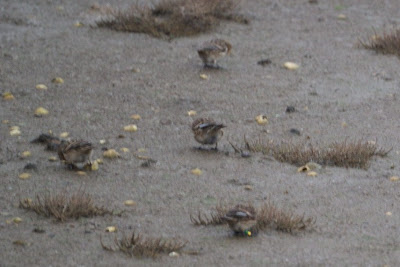 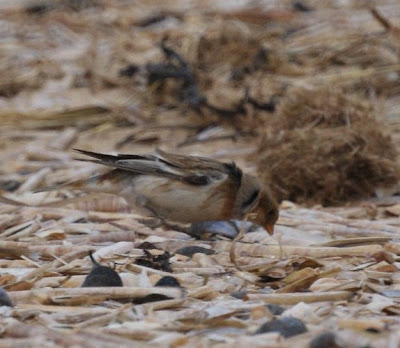 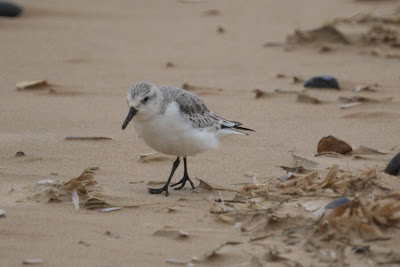