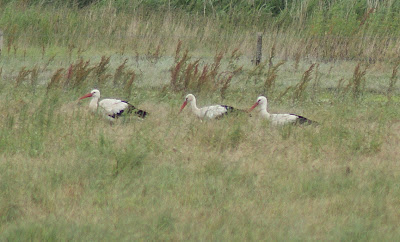 A trip to Lidsey on Sunday morning for the 3 White Storks that had settled down in a field near by proved very successful   , i had to go via B&Q as wellingtons were essential as the track to the viewing area was under water , these birds are probably the first wild White Storks i have seen in the UK , i have seen two individuals on separate occasions in Kent , one i know was an escape but the second bird i am not sure about . 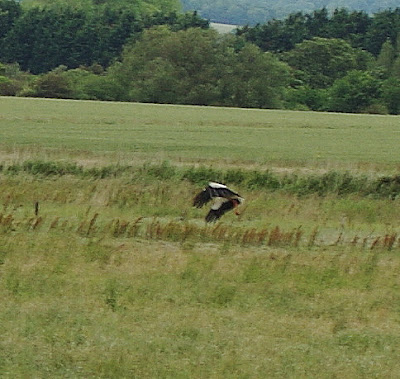 One of the Storks taking off .

I watched them feeding very well on toads and frogs before they flew very low over the railway track into the next field , if a train came by at that point they would have been killed . 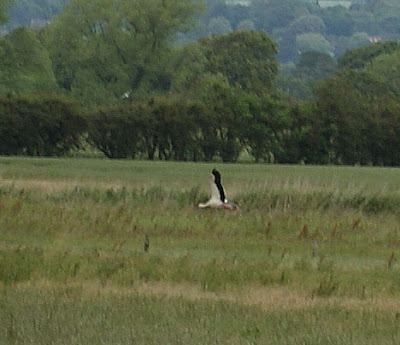 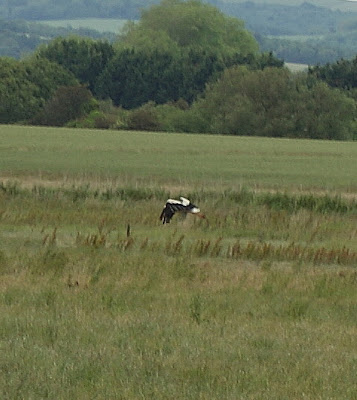 Two of the Storks just stood preening themselves while the third bird walked around disappearing at one point down into a ditch , really good birds to see , other birds of note in the area were Little Egret , Grey Heron and lots of Yellowhammer which was pleasing to see . 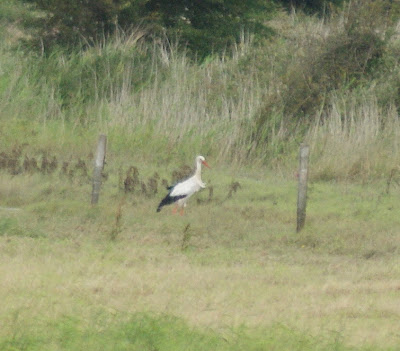 On its way to a ditch. Taking advantage of the long diamond jubilee weekend on Monday the 4th June i headed to Pennington Marshes for the 2 Black Winged Stilts and the  adult Night Heron , i arrived on site in good time and made my way to the Shoveler pool and had some fantastic views of both the Black Winged Stilts , an adult and juvenile ,  i took a couple of hundred photos and here are a selection of them : 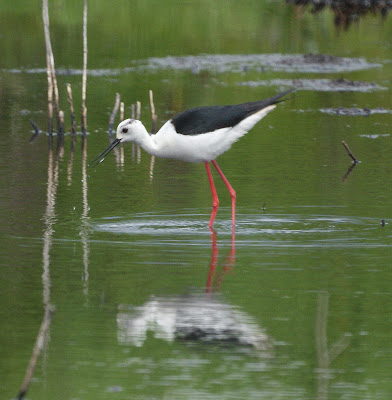 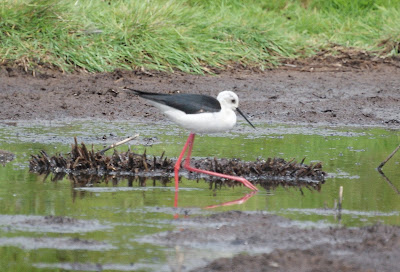 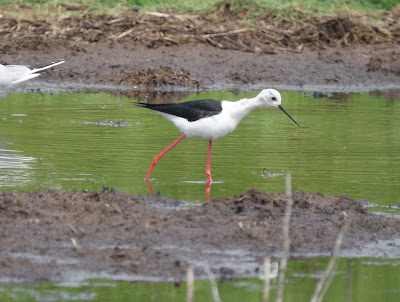 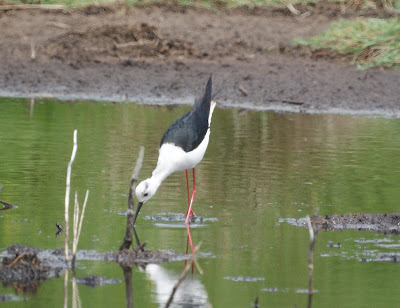 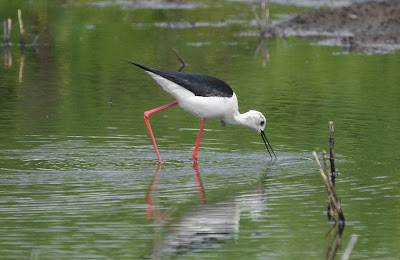 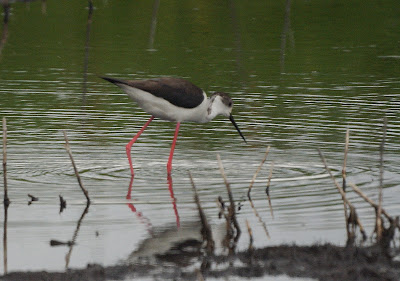 The Juvenile bird did not come as close as the adult , the juv bird was alot browner on the mantle and wings and also had alot more brown on the crown and ear coverts , they flew around a couple of times and the adult bird often called when the Black Headed Gulls got to close for comfort .

I watched these for over an hour and then walked to the area the Night Heron was showing , this was pretty hard to see as you had to look through a very dense hedge row and across a pool and the bird was partially hidden in a tree , however i managed to see it through my scope with little chance of getting a photo, i did add 2 Med Gulls which flew over head from this site and then i decided to head off to the New Forest . 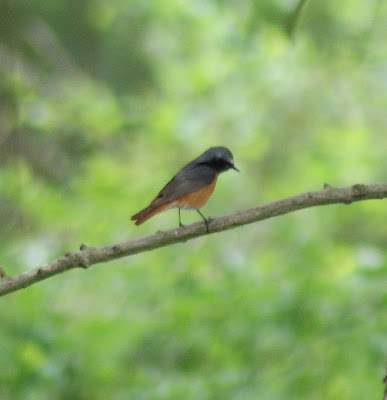 The first site i stopped at was called " Pigs Bush " strange names these places have , anyhow i was straight onto a male Common Redstart as i left the car park , these are really smart birds to see , as i walked around this part of the forest i heard Green and Great Spotted Woodpeckers and then i saw a young Common Redstart , and then more appeared they looked like they had on just fledged and these are the first young Redstarts i have been lucky enough to have seen , Marsh . Blue and Long Tailed Tits put in an appearance , i also had a look over the nearby heathland and added this Small Heath to my day . 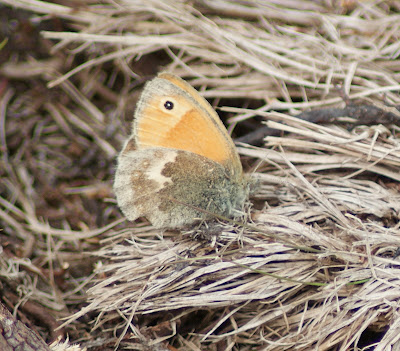 On my way back to the car i added Nuthatch and a family party of Spotted Flycatchers to my days total . 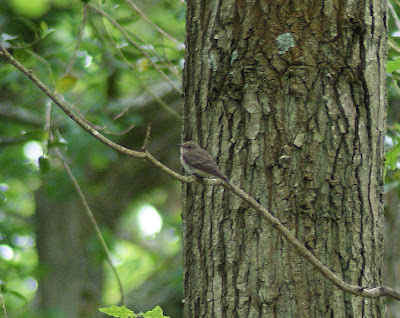 My final destination of the day was north of Lyndhurst and i hoped to connect with one or two specialty birds and after a short while i found the first of my target birds in a very showy Woodlark which had food in its beak which you can only hope it was off to feed its young . 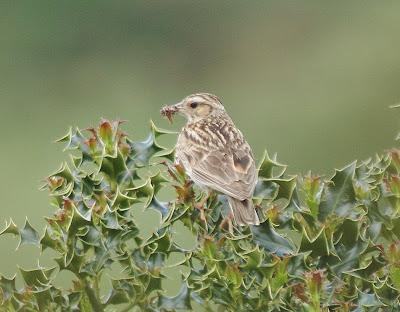 Woodlark with food for its young.

There were 2 Woodlarks in total here or though probably more if you ventured out in to the nearby heathland , my other target bird was proving more tricky as expected but after a while i picked out a distant Goshawk which came closer then eventually was lost to view  . 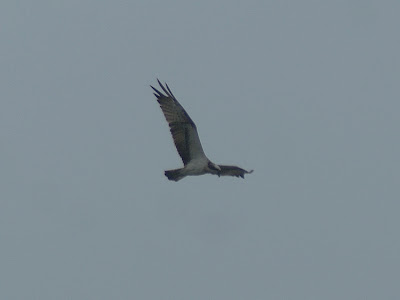 I received a text message from Martyn Wilson about a Osprey over Stodmarsh on Sunday morning , and later in the morning Chidders phoned to say it was still present so i headed over there just in time to see it  over the main lake , it hovered on one occasion and then flew towards Grove then circled back and then headed off with purpose towards Collards , this is only the second Osprey i have seen at Stodmarsh and very nice it was to , many thanks to both Martyn and Chidders for their info , they also have some good photos on their blogs which are well worth seeing . Here are some more record shots that i took : 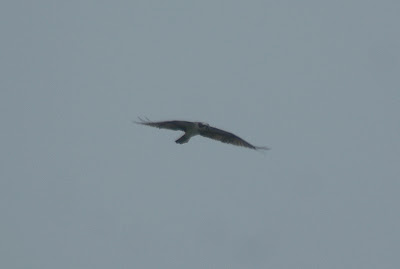 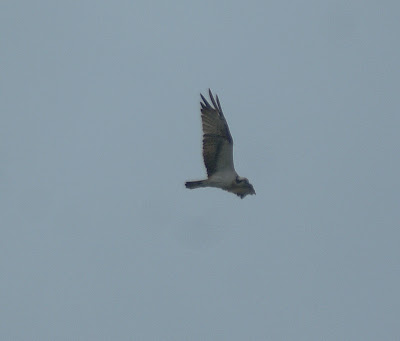 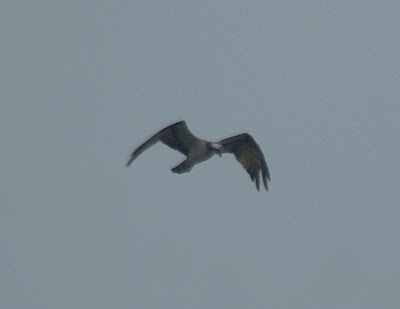 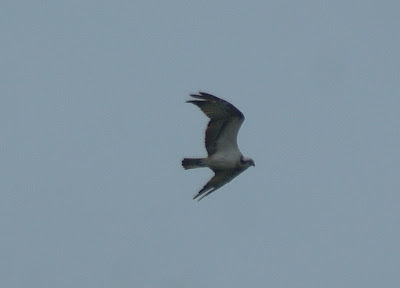