Winters Day Birding on Sheppy plus Brief visit to Oare 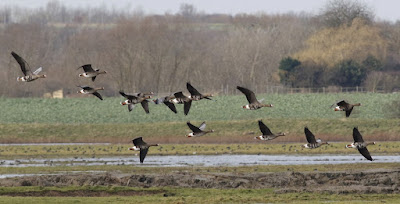 The forecast for yesterday 23rd February was sunshine and no rain ,  so i decided a trip to the Isle of Sheppy would be the order of the day , i started off at Swale NR and although i wasn't looking forward to driving down the track (which would not have looked out of place in a war torn country) i was pleasantly surprised to see they have done some repairs on the track which made for a much more pleasant trip.

I started my walk from the car park (which used to be a great site for Twite in the long distant past) and headed off in the hope of seeing the wintering Richard's Pipit which has been seen regularly anywhere between the car park and the hide . 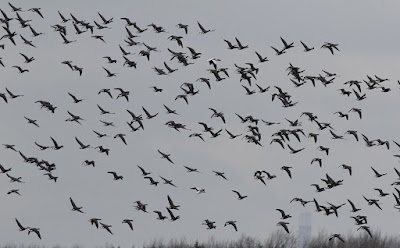 Despite searching i had no luck with the Richards Pipit however i did see loads of Skylarks , Meadow Pipits & Reed Buntings . i continued my walk seeing hundreds of Dark Bellied Brent Geese plus several Marsh Harriers , eventually i bumped into another birder who had said he saw the Richard's Pipit nearer to the hide so after a brief chat we headed off in our separate ways , eventually i saw the Richards Pipit fly up from the bank then land on the path in front of me. 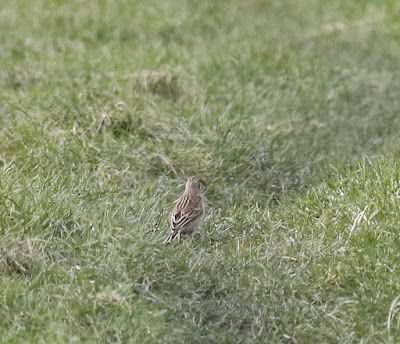 Richard's Pipit with a grub .

I never got a decent photo of this bird however i did have some great views through my scope , i waved some other birders over who hadn't seen it and we all enjoyed some decent views. 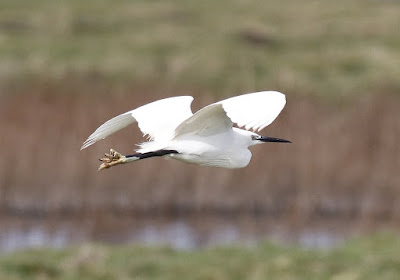 A Little Egret flew close by before i retraced my steps back towards my car and then drove along towards Leysdown looking out for waders and i always check the gull flock on the football pitched and scored with a cracking Med Gull. 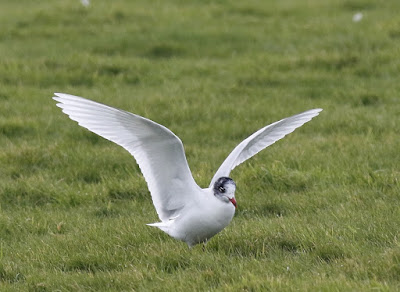 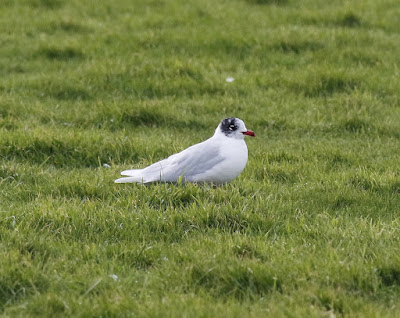 I think Med Gulls are stunning birds to see so was really pleased to see this one , i also saw a single Whimbrel on the football pitch. 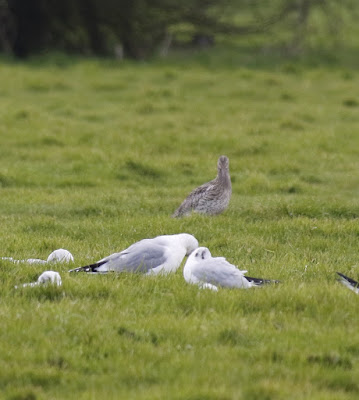 Record shot of the Whimbrel.

I decided to head off to Capel Fleet to try and re find the Tundra Bean Geese that had been seen the day before , as i came down the hill past the farm i noticed a large flock of Grey geese near the bend , so i parked up and scanned through the flock with my scope and eventually saw both Tundra Bean Geese , although somewhat distant i did get some ropey record shots. 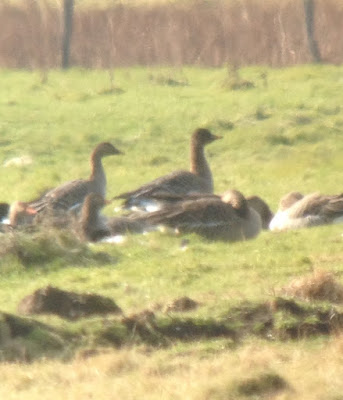 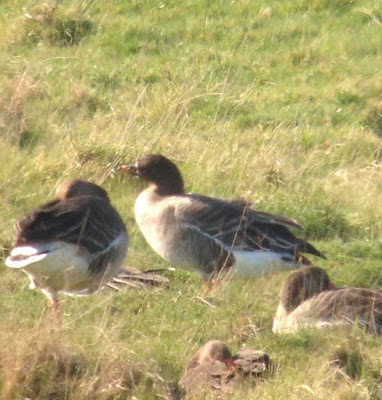 I put the news out and it wasn't long before some more birders turned up and saw them to , other than a couple of Corn Buntings and the usual Marsh Harriers there wasn't much more to see at Capel , although i did see another close Little Egret and two more Med Gulls. 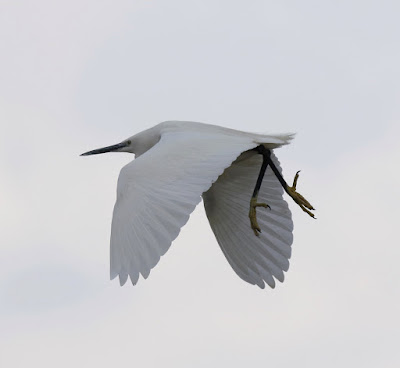 A really enjoyable days birding on Sheppy , i quickly popped into Oare Marshes on my way home and managed to see the two Lesser Redpolls that have been associating with the Goldfinch flock along the path towards the East flood hide. 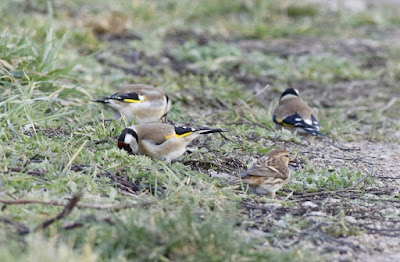 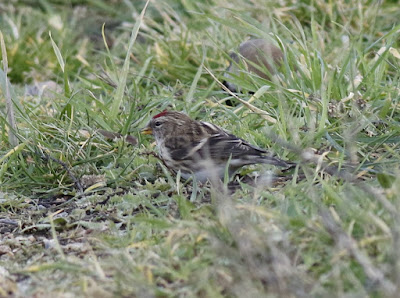 Plenty of Pintails on the East flood plus a tight flock of Avocets all huddled up together in the middle of the flood. 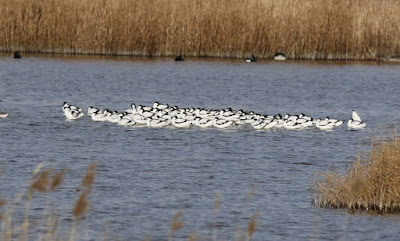 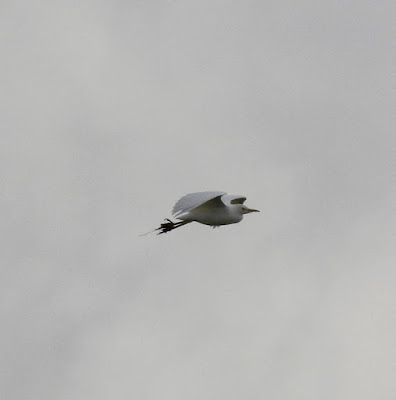 I went over to Hareplain near Frittenden today to try and see the Cattle Egret which is a great local find by @SteveBDunge , i bumped into another birder who had seen it earlier flying towards Hareplain , i had a drive around the area without any luck and then headed back to the original site . 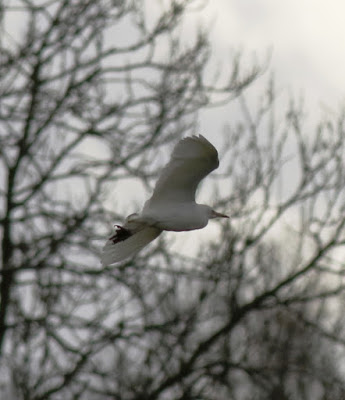 Flying over the road towards Buckhurst farm.

When i returned the original birder i saw was watching the Cattle Egret which was in the sheep field , he said it was hidden there the whole time , (must of been a Little Egret he saw fly off earlier ?) .

Anyhow i soon saw the Cattle Egret through my bins before it did take off and flew around us and landed in the fields just below Buckhurst Farm , it was always distant and i never got any decent photos of it , (poor light & distance being my excuse).

Here are a couple of digi scoped photos i managed to get , there was also a single Little Egret in the same field. 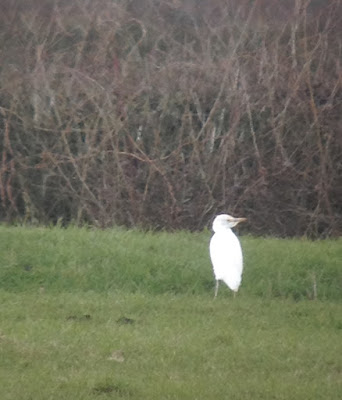 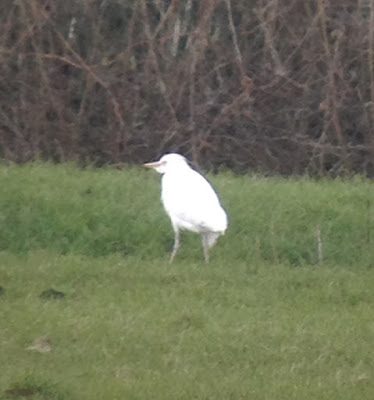 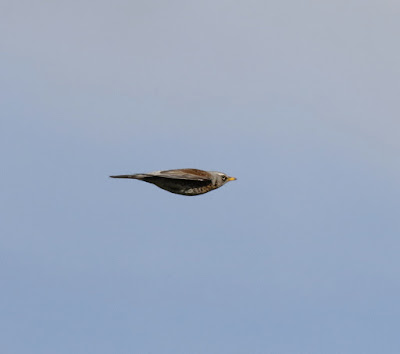 One of many Fieldfares.

After being under the weather for over a week  i felt much better yesterday the 11th February and decided i would pop out for a couple of hours in the afternoon , i quite fancied having a look at the Brambling flock at Teynham and after getting some great information from Frank  (Thanks mate) i headed off to Teynham church , first birds i heard then saw were Fieldfares , there were loads of them with quite a few Redwings amongst them . 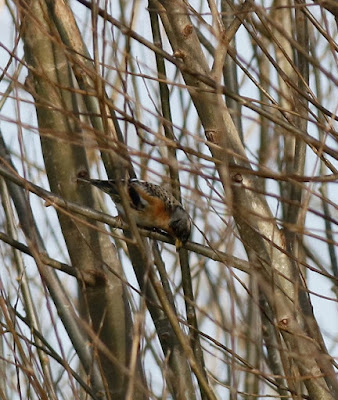 I then ventured in to the orchard and had some brief but decent views of 2 Bramblings amongst the throng of Chaffinch & Goldfinch flock.

Frank informed me that checking out the coppiced trees is worth doing as the finches often perch up there , well sure enough i saw several male Bramblings having a preen . 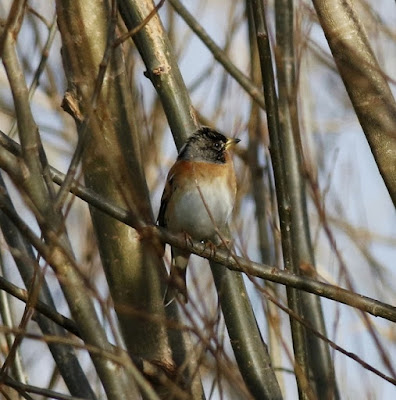 A really enjoyable birding session there , i then decided to head to Oare Marshes to try and see the drake Goosander as i had not seen one there before and it would also be a welcome year tick , i had a quick look over the East flood where the usual waders were present although in smaller numbers than my previous visit .

I then drove down to the car park by the sea wall , (pot hole heaven for sure) , i walked along the sea wall towards the sea watching hide adding a really smart looking Stonechat to my day list , i saw five Stonechats in total . 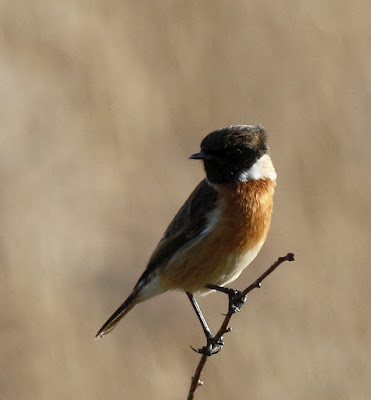 I eventually reached the Sea watching hide and had a quick scan of Faversham creek and saw the drake Goosander on the river bank on the far side of the creek. 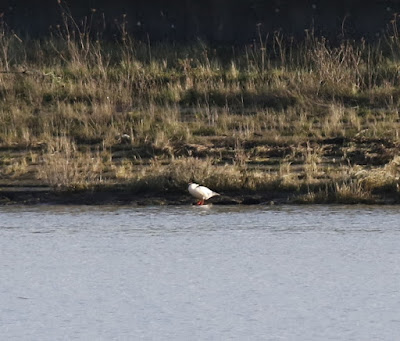 Although distant it was really great to see and was duly added to my OML !!, whilst watching the Goosander i noticed a  passerine fly into a small bush by the sea wall ,  on closer inspection i could see this was in fact a Chiffchaff which was soon joined by 2 Stonechats.

I continued my walk around the East flood and saw a distant Little Owl behind the cottages , i also saw a cracking  Reed Bunting perched amongst some cob webs. 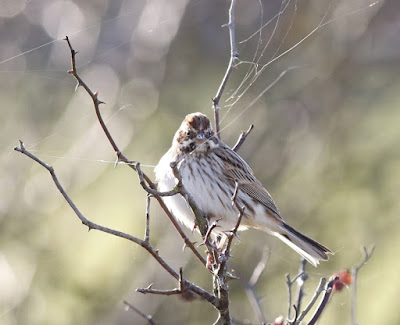 Reed Bunting amongst the cob webs.

i then started to make my way back to my car when i saw a  Barn Owl hunting over the West flood. 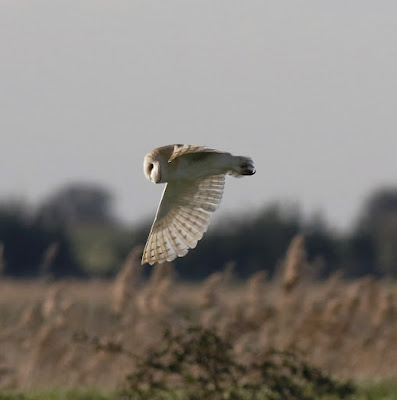 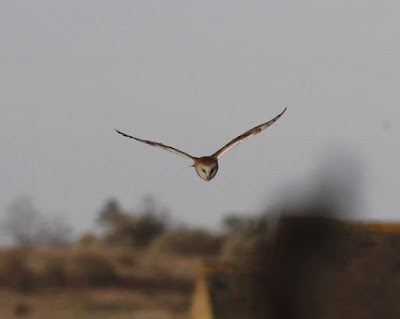 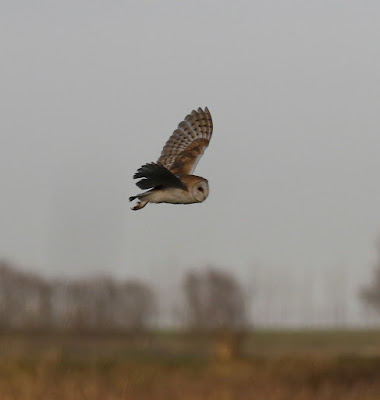 I also was lucky enough to see a Kingfisher on the West flood which rounded of a great afternoons birding.