Just a quick post to say i was just on my way out of Thanet on Monday 17 th  when i saw a Red Kite drifting over the Thanet Way towards Chambers Wall near Reculver at approx: 14.10 .
I am off to Shetland this coming Saturday 22nd for a weeks birding holiday and will give a holiday report when i get back , just hope the Easterly winds next week turn something up ......
Posted by Robs Birding at 01:18 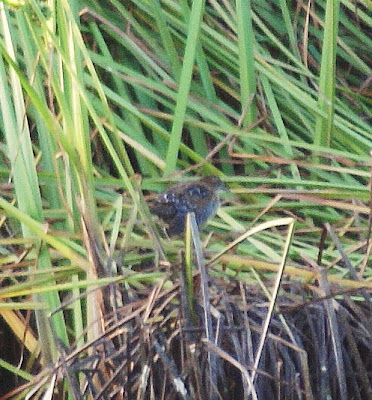 I  arrived at Rspb reserve Rainham Marshes at approx 5.30 am , i made my way around to the Shooters Pool hide and joined the already assembled birders in the hope of connecting with the Baillons Crake , the right hand side of the hide was packed as that has been the best area to view the Crake , i found an empty seat on the left hand side and plonked myself down ,   i was set for maybe a couple of seconds view of the Crake as that has been all most birders have been lucky enough to get , 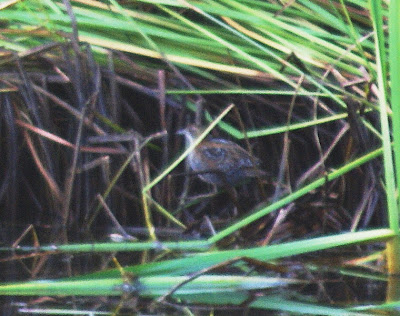 The light was improving and visibility was much better , i then got onto a small Crake flying across the pool and soon another birder was on the bird and confirmed it was the Baillon's Crake ,    the Crake begun climbing along the reeds and gave amazing views for about ten minutes and according to the rspb member of staff this is the best it has shown , of course i was  elated to have seen it , quite a few birders turned up after it had flown out of sight and were a little bit disappointed to say the least.

I decided to hang around to see if it would reappear and it was seen a couple of times in flight but had become elusive , however somewhere between 7 and 730 , ( my phone and pager were turned off so had no idea of time ) the Baillons Crake reappeared right in front of me just the other side of the small channel climbing in amongst the reeds . 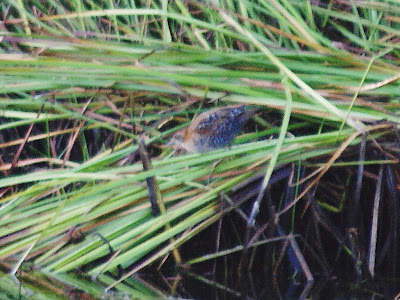 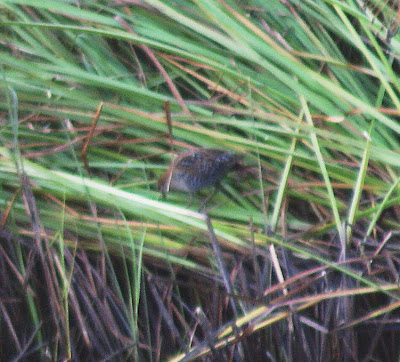 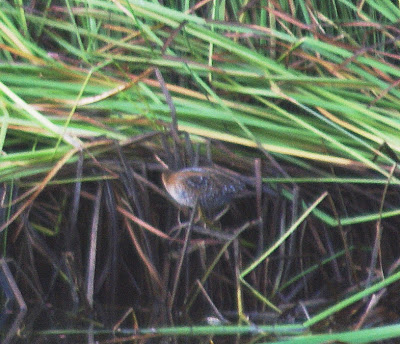 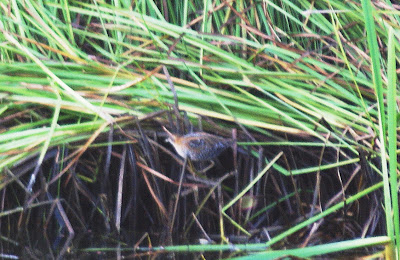 Sorry about the poor quality of photos , the light was'nt that great but at least you can get an idea of plumage detail , the white flecks looked like they were painted on with tippex , this showed well for another 5 minutes before it once again disappeared into the reeds and out of sight , and although i have now been lucky enough to have seen 3 Baillons Crakes  in the UK this was still a remarkable bird to see .

I did not add to much more here although a fly through Black Tailed Godwit was nice plus there were plenty of Sedge Warblers and Chiffchaffs , i heard several Cetti's Warbler and another birder identified a Migrant Hawker Dragonfly which was pretty smart . 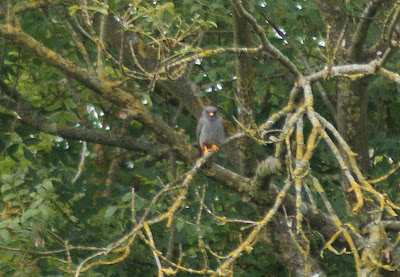 I run out of time last Saturday 8th to go for the Red Footed Falcon in Chichester and was wondering how i could get there before it headed off to pastures new and as luck would have my first delivery of the day on Monday 10th September was in ..... Chichester , i had a 20 minute break near Ivy Lake and managed to connect with this delightful Falcon , here are a few images of the bird which mainly sat up in an Ash tree with the odd fly around before returning to its favoured perch . 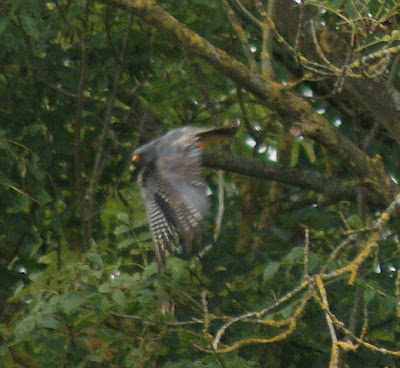 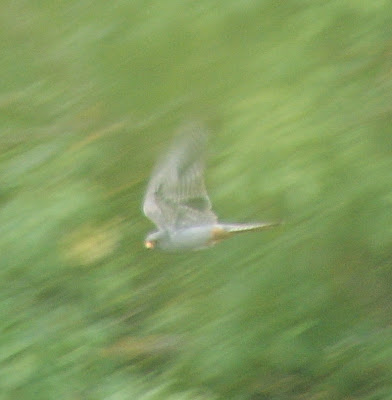 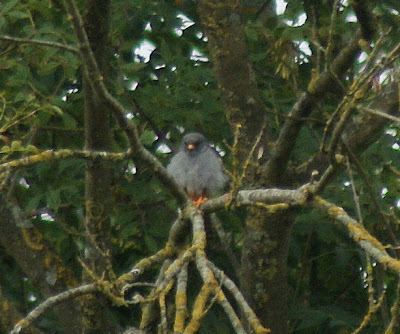 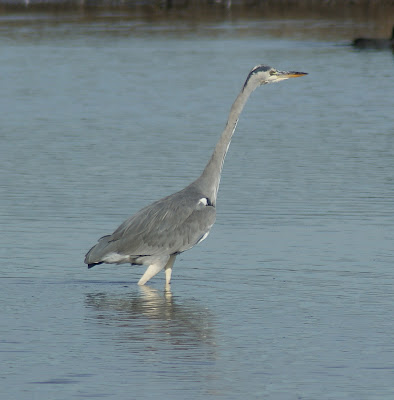 A long tiresome journey to Lodmor reserve in Weymouth yesterday proved very worthwhile , all week the pager has been giving me updates of a Short-Billed Dowitcher in Dorset , this being only the 2nd ever recorded in Britain and i was stuck in work until yesterday , i had intended to head off early hours on Saturday morning only things did not go according to plan , but that's another story !!!! 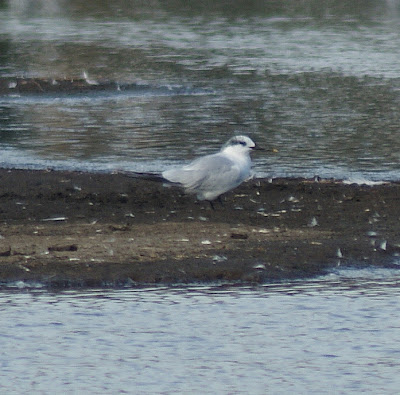 A 5 hour journey ( it should have been only 3 and half hours traffic was a complete nightmare ) finally got me to the site and after a frantic walk and about a 20 minute wait the Short-Billed Dowitcher gave its self up and delightful views were obtained and more importantly the barred tertials were seen which is the key feature in separating Short and Long Billed Dowitcher, the Short Billed Dowitcher was mainly asleep when i first got onto it , the broad white supercillums were very evident , dark crown and barred tertials were also seen , it finally woke up and had a bit of a stretch , sadly the photos i took were hopeless even by my standards however there are plenty of good photos of this bird on http://www.surfbirds.com/ and various blogs on my blog list . 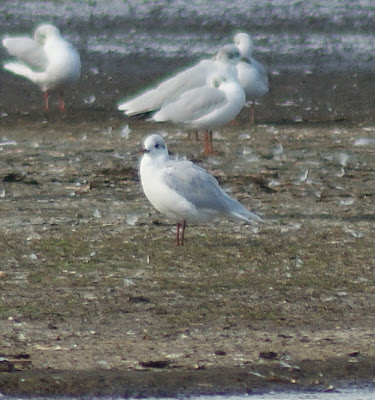 One of many Med Gulls .

I met a birder who had travelled down from Stoke on Trent to see this bird and the poor guy was in " headless chicken mode " he was in a total flap and could not get on the bird at all , so i kindly let him look through my scope which was on 60x and the only thing you could see was the Short Billed , he could not see it !!!! then i looked through his scope whilst he was looking through mine and his scope was on the bird !!!!! but just at that point the bird stood up and walked out of sight and unbelievably he still had not seen it !!! he was totally gutted and you had to feel sorry for him , we have all been there , still after he was making plans to sleep in his car over night the Short Billed Dowitcher reappeared and started to feed along side a Black Tailed Godwit and finally he connected ...lol Other birds of note here  were : Water Rail 2 , Sandwich Tern 30+ Med Gull i saw 10 but some birder had a count of 19 plus there were several Black Tailed Godwit and Lapwing . 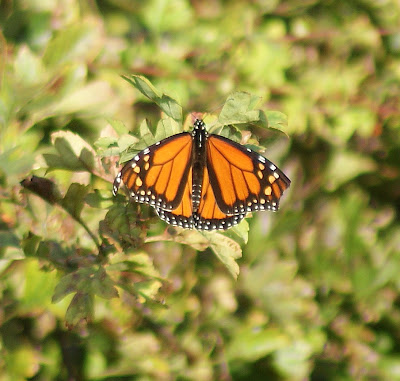 From here i headed over to Easton on Portland and had some great views of a Monarch , i have seen a couple of these before on Scilly , they are quite stunning and even though this one had a bit of its forewing missing its was still impressive to see . 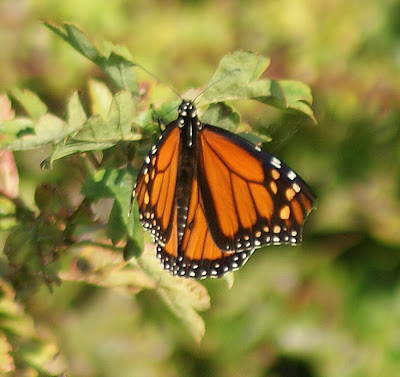 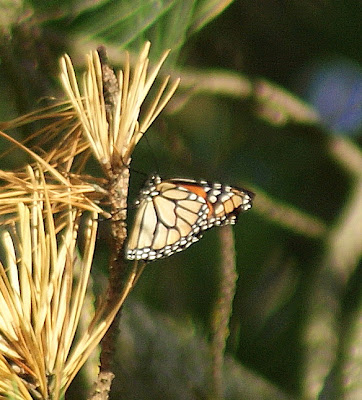 It roosted high in a nearby pine tree .

I had planned to go to Chichester for the Red Footed Falcon but sadly time run out on me so headed for home which was a much more pleasant journey .