Only a short post this time,  sorry for lack of photo as my target bird was a bit to distant to get one , i managed to see the Red-Backed Shrike at Cliffe and as i said it was quite distant , it was hard to age the bird although it was either an adult female or juv and to honest i would say it looked more like a juv to me , there did not seem to be enough plumage contrast with the wing and mantle from the nape and head as there is with adult females in my experience, it showed plenty of barring on the under parts and it was quite actively feeding , a really smart bird from one of my fav. family of birds.

A quick call into Oare marshes produced the following : 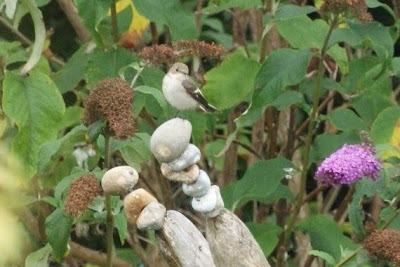 I set of for Dungeness last saturday the 21st August at about 7am in the hope of a decent sea watch and catching up with all the Herons and Egrets that have been seen there of late , i arrived at the sea watching hide at approx 8.15 am and was soon onto a Black Tern which was a year tick for me , this was shortly followed by year tick number 2 in the form of a Fulmar , i really don't get out enough lol.

There where plenty of terns moving along the coast mostly Common and a couple of Arctic Terns close in gave good views , but the much hoped for Skuas were non existent at this point.

After about 30 mins i picked up fairly way out  Arctic Skua, there were plenty of Gannets moving east and west all the time , its hard to give an exact count but i would estimate 100 + , i moved onto the " patch " in the hope of adding Yellow Legged Gull to my year list and after quite abit of scanning through the hundreds of gulls and terns i came across 2 juv. Yellow Legged Gulls.

There was also 1 Arctic Tern and 10 more Black Terns feeding over the patch , i continued sea watching and eventually picked up a close in Great Skua which was quickly followed by a Kittiwake and these two birds were most welcome year ticks , the sea watch was fairly quite to be honest i counted 50+ Black Terns in total and had 10 Common Scoters.

On the way back to my car i encounted 4 Black Redstarts along the power station wall and as i neared my car i saw 3 birders intently looking at bird that had just flown into the Lighthouse garden and was soon informed that it was yet another year tick for me in the shape of a smart Pied Flycatcher. 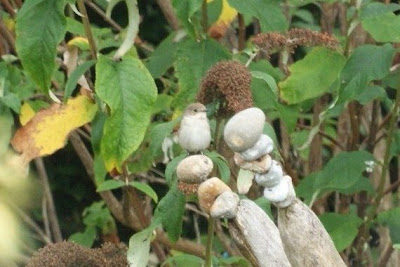 Well with 6 year ticks in the bag i headed of to the Rspb reserve in the hope of catching up with the Cattle Egret that had been seen recently near the entrance just past Boulderwall farm , when i got there there was not another birder around and it had not been put out on the pager , but after a quick scan of the bemused cows i was soon adding the Cattle Egret to my year and Dungeness area lists . 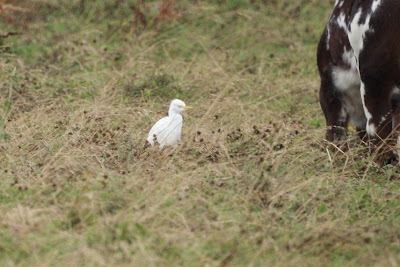 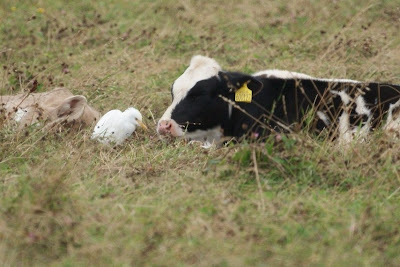 I quickly reeled of several photos then put it on the pager then headed of to the reserve to use ther facilities before heading of to Denge marsh road , and i did not have to wait to long before adding Purple Heron to my days total . 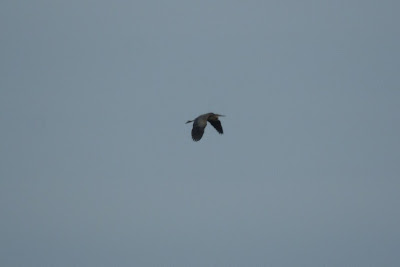 I had to wait abit longer to add Great White Egret but eventually it gave its self up , i first spotted it walking behind a reed bed then it flew up and gave a short but close view before it was lost out of sight , this was shortly followed by both Grey Heron and Little Egret in flight over the reed bed , not bad 3 Egret species and 2 Herons in Kent all on the same reserve !!!

I then decided to head off to Grove Ferry for another look at the Spotted Crake and hopefully get some photos and i was not disappointed. 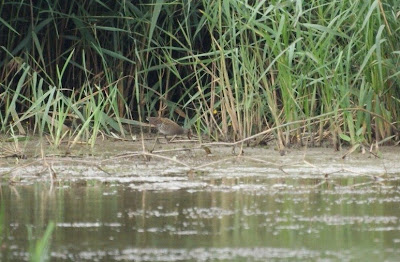 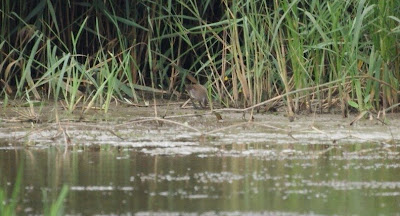 The Crake showed really well for long periods and Ok i know these are not great photos but i had superb views of this wonderful bird through my scope , the weather was quite awful most of the day , but the birding was very good , other birds seen from the hide were 2 Water rail , 7 Green sandpipers , 1 each of Greenshank and Black-Tailed Godwit , 2 Marsh Harriers and 1 vocal Cetti's Warbler.
Posted by Robs Birding at 20:02 No comments: 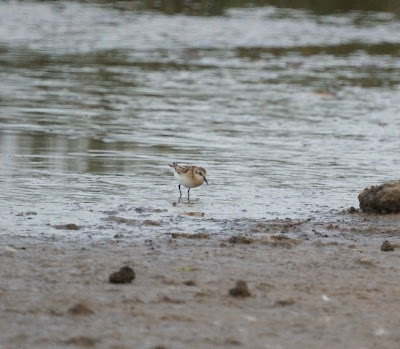 A very quick trip out to Oare marshes after getting home from work  in the hope of seeing a juv Dotterel proved successful , i only saw it flight as it took off just as i got there so unfortunately no photos , i wouldn't say its the best view i have ever had but a view it was ... i also saw a very smart juv. Little Stint  which was much more polite and stayed around for me to get a couple of photos. 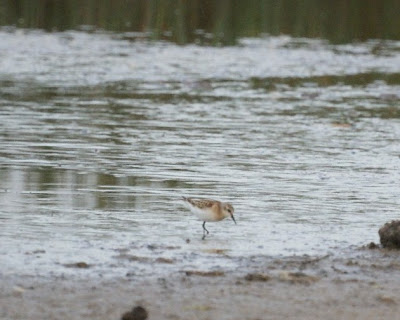 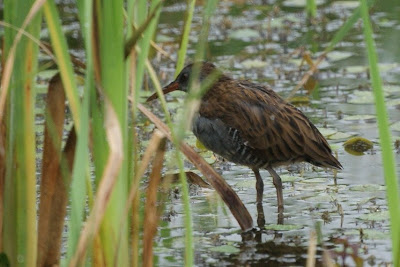 Ok i know its not a picture of the delightful Spotted Crake as the title picture but unfortunately although i had super views of this delightful Crake i never managed to get a photo , i made my way to the "  Feast hide " at Grove Ferry  arriving about 10ish  expecting a long wait but i no sooner entered the hide and it was on view , i only managed very brief views of it disappearing into the darkness of the reed bed and yes ok i knew it was the Spotted Crake but i wanted much better views so decided with all confidence to wait it out until it gave itself up in all its glory.

There was plenty of other birds to keep me occupied which included 2 Green Sandpipers zipping about in a game of chase , 1 Common Tern flew in briefly then flew out again , 3 Black-Tailed Godwits put in an appearance in fine summer plumage then another Green Sandpiper taking the total up to 3 joined the other 2 then decided twos company and threes a crowd and flew off again . 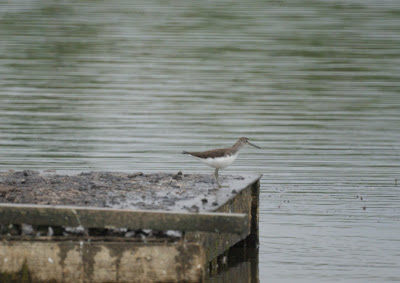 There where several very showy Water Rails , i counted 4 at one time but there probably were up to 7 of these fine birds , after about an hour or so a Greenshank dropped in for abit of a rest and there was a brief appearance of a Common Snipe .

So after about 3 hours sitting in this hide hoping to gain a better view of the Crake i was beginning to wonder if it had decided to stay under cover of the reeds out of the rain and out of sight , then two birders joined are party and with in minutes the Spotted Crake  was located by one of the new birders and flew right out into the open giving stunning views , it climbed up and along a broken piece of reed showing of its fine white spotting , grayish head and yellowish bill were easily seen , it was very active climbing and moving in and out of reeds and dare i say it i still have a 100 % record on not dipping any Crake i have ever gone for , phew   .

From here i had a brief stroll around to the water meadows but did not add anything new although i did see another 4 Green Sandpipers and with the weather closing in i thought i would make my way back to the  viewing ramp in before i got soaked , i arrived and thought i had a Wood Sandpiper before it quickly darted into cover on the left hand side of the pool , damn why do they do that ??

Anyhow i scanned the pool and connected with 2 Ruff , a juv and a moulting adult a further 3 more Green Sandpipers taking the days total up to 10 , there were plenty of Lapwings.

I then was joined by two birders who i met in the hide earlier and the wader i thought might have been the Wood Sandpiper was confirmed as it was re located by one of the birders and  and we were all enjoying really good views , sadly i never managed a photo as the rain was coming down and with this i decided to go to Sandwich and check out the site where the Temmincks Stint was reported about two hours earlier . 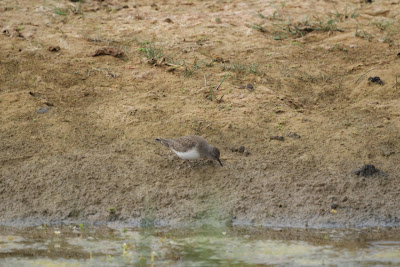 Restharrow scrape was my destination in pursuit of this fine Temmincks Stint , i arrived on site about 3.30 pm and there was not another birder in sight which is quite unusual for this site but what the hell , i made my way to the hide thinking it must of gone (hence no birders) and after my first initial scan i thought that was the case,  2 more Green Sandpipers, 1 juv Little Ringed Plover and several Lapwings were easily seen then something caught my eye on a smallish island in the middle of the scrape.

Yes it was the Temmincks Stint its been such a long time since i had seen one of these , they are really neat waders and a very much welcome site and year tick , it flew closer right in front of the hide , i couldn't believe my luck and reeled of several photos . Here are some of them. 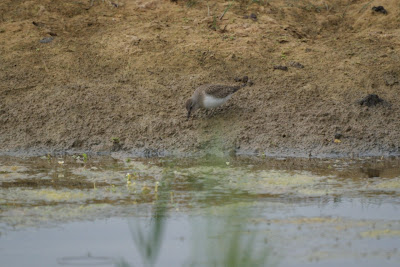 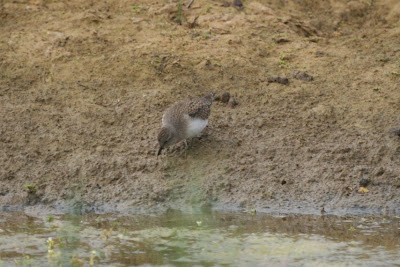 I also saw a Common Sandpiper . 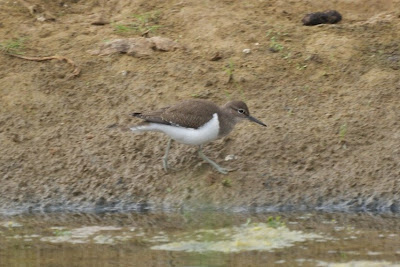 Another birder joined me as i was about to leave so i put him onto the Temmincks and then headed of home very happy .
Posted by Robs Birding at 11:08 No comments: 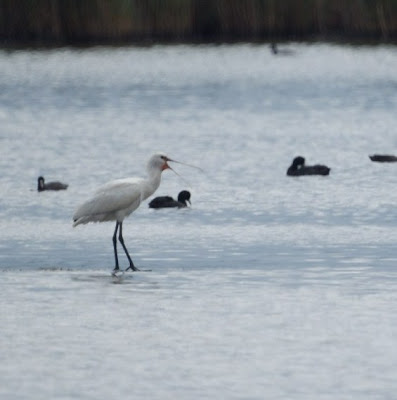 Another attempt to see the immature Spoonbill that has been commuting between Oare Marshes and Elmley proved very successful when i popped into Oare before going to a friends for dinner , the Spoonbill was on the east flood when i arrived just before 11am.

It was quite actively feeding and was a joy to see , it walked along to one of the small islands and started to preen then it decided that was enough action for one morning and tucked its spoon shaped bill under its wing and had a mid morning snooze , which seems to be the case for most Spoonbill sightings , i managed a few photos which for me i didn't think were to bad...lol 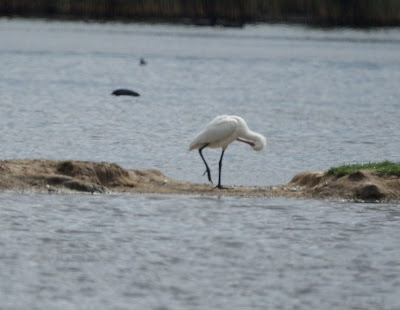 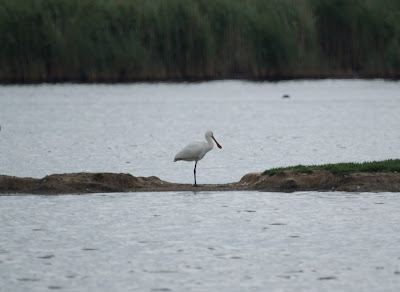 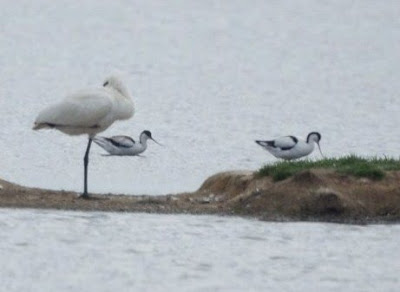 I also had really good views of Little Egret and Ruff , there was very good numbers of Black-Tailed Godwit, Redshank plus lesser numbers of Golden Plover than the previous week also i saw 1 Spotted Redshank for good measure. 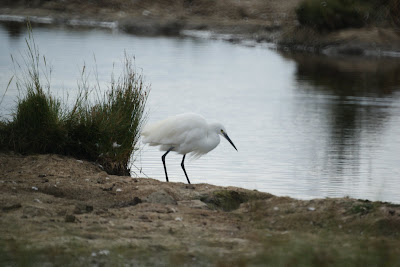 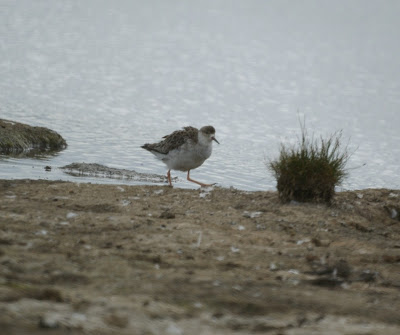 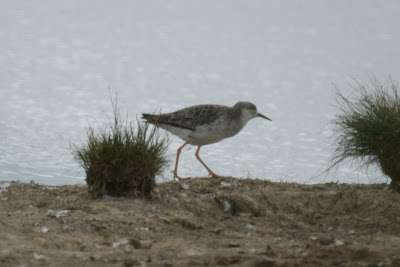 Ruff.
Posted by Robs Birding at 12:43 No comments: