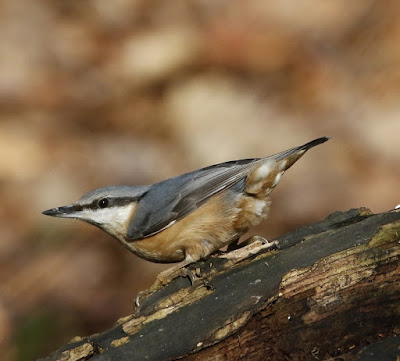 Over the last week i have been doing some woodland birdwatching and my quest was to try and at least hear and hopefully see a Lesser Spotted Woodpecker , one day last week i went to Bossenden wood , i have heard them there before but no luck this time , however local bird photographers have set up a feeding station which was busy with at least 3 Nuthatch & several Coal Tits coming into feed. 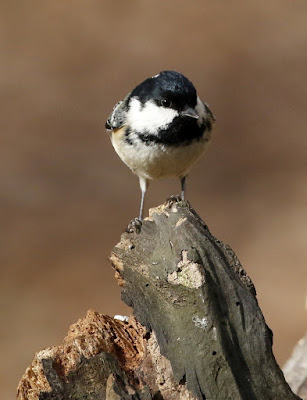 I know there is alot of mixed opinions on this form of bird feeding 'just to get the photo' but i have to say i don't really see the harm in it myself (at least they are only being shot with a camera and not a gun !!). As always providing the birds are not being hassled or disturbed by over enthusiastic photographers (birds welfare must come first) then i don't see a problem plus the birds are getting fed at a time of year their main food supply is in low supply. 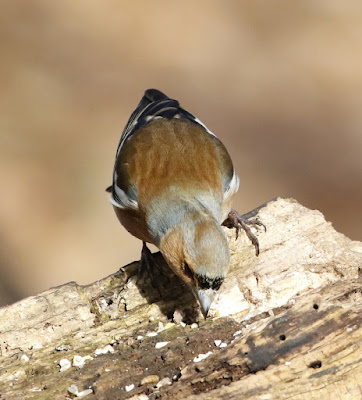 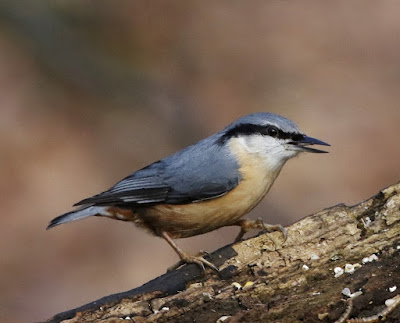 I spent quite sometime walking around Bossenden and saw plenty of Blue ,Great, Coal & Long tailed Tits but no Marsh Tits , at least 3 Great spotted Woodpeckers and a single Green Woodpecker,  i heard Treecreeper and saw at least 2 Goldcrests. 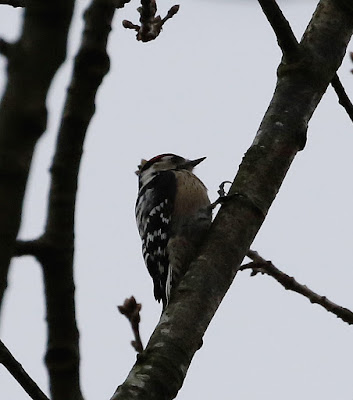 Yesterday the 20th February i also called into Thornden Wood and took of on one of the side trials , i heard a Lesser Redpoll overhead but couldn't see it , i then continued along the trail and also heard both Great Spotted & Green Woodpeckers , i decided to wait around in this area just in case and after about 20 mins nothing else was heard or seen so i decided to head off and just as i started to walk i heard a Lesser Spotted Woodpecker , it got closer and closer and there it was in the tree right by me , Wow what a bird !!! 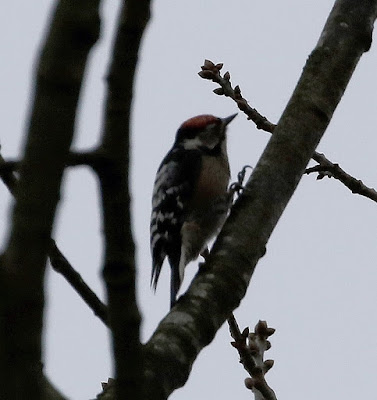 Lovely red crown on this bird.

After i had watched this bird for quite sometime i carried on my walk adding various different species as i went until i finally caught up with 3 Lesser Redpolls feeding in an Alder tree , a really enjoyable walk through the woods however it's abit of a dog walkers heaven and even though they are meant to be kept on leads most were not and often came running up barking at you which can be a bit daunting at times. 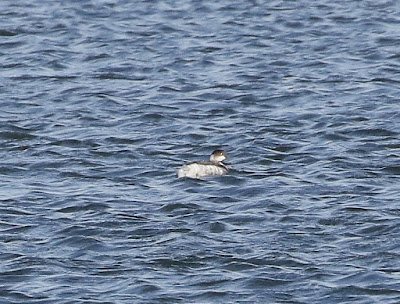 Yesterday the 13th February i headed off to Scotney and Dungeness Rspb reserve to take advantage of the forecast of sunshine after the very cold & dull last few days. 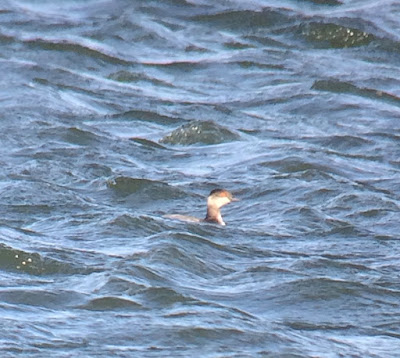 Despite my best efforts i couldn't locate the Scaup which were probably still there but sheltering out of sight somewhere out of the wind.

I decided then to head to Dungeness Rspb reserve and do the full circuit around the reserve , It was fairly quite looking from the Dennis hide so i continued on past the dipping pond (no sign of the Long eared owls) and went to the Firth hide , i quickly scanned the wildfowl and saw 2 'Redhead' Smew , there were lot's of Tufted Duck, Pochard & Shoveler with a scattering of Gadwall, Mallard & Teal, there was also at least 5 Goldeneyes. 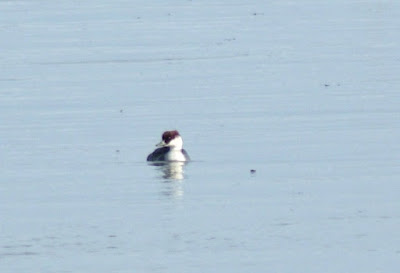 There were plenty of Gulls on the islands and after a scan i saw a superb adult Yellow Legged Gull which was a new addition to my year list. 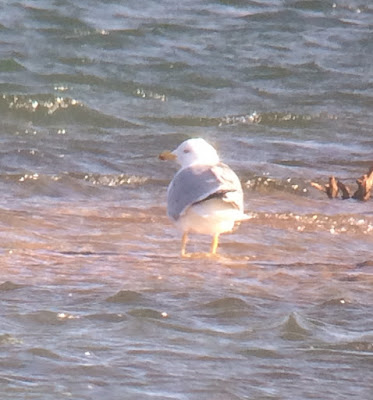 I then had a look from the Makepeace hide and i instantly saw something in the water , a look through my bins confirmed a Peregrine Falcon which was quite a surprise !!! 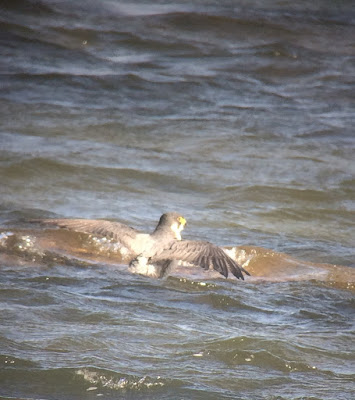 My initial thoughts were it has caught something but it hadn't , it was just having a wash , it proceeded washing then had a fly around shaking it's feathers dry. 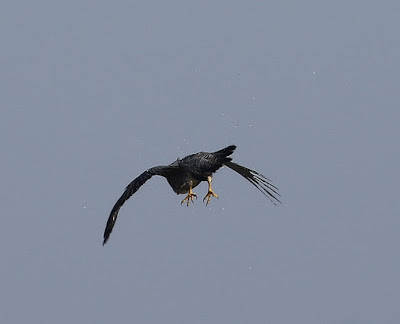 If you enlarge the above photo you can see the droplets of water falling off the Peregrine ,it then did a bit of a fly around before heading off towards the power station. 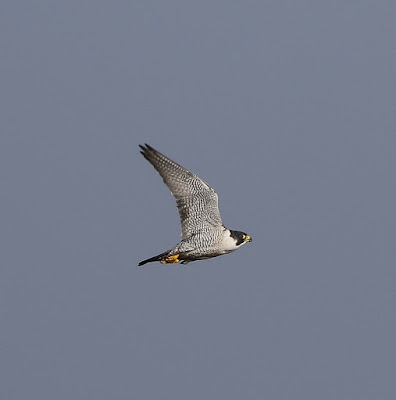 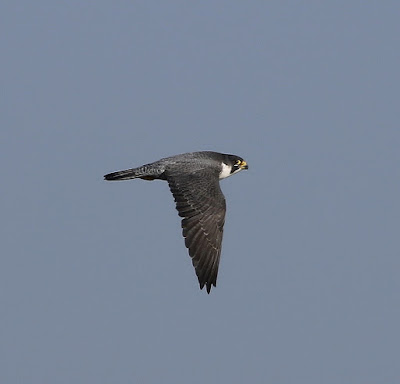 I didn't go into the Denge marsh hide as i was told that a drake Smew was showing quite well at Hookers pit. 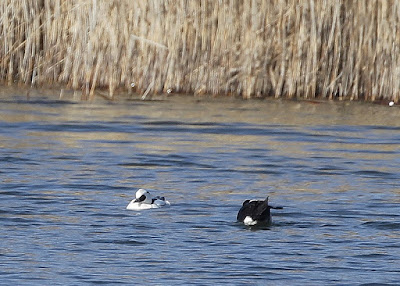 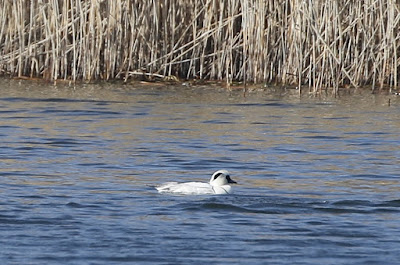 These are such stunning looking birds and it's been a good couple of years since i have seen a drake Smew, there was also a Great White Egret nearby.

Having had my fill of this stunning bird i had a mug of coffee on Hookers mound view point in the hope a Bittern would do a fly by but sadly it didn't , i then started my walk back along the trail to the visitor centre and saw 2 Egyptain Geese as they flew past. 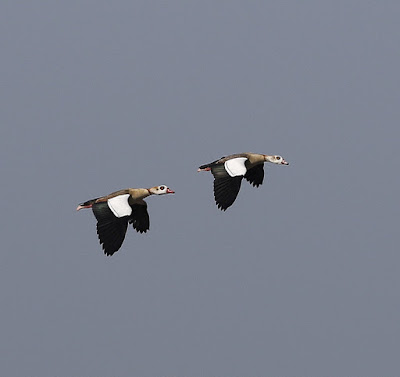 On the way out of the reserve i had a look over Cooks pool and the ♂ Ring necked Duck was still present and there was also another Redhead' Smew present , a quick look over the feeders produced Reed Bunting & Tree Sparrow, another really enjoyable days birding. 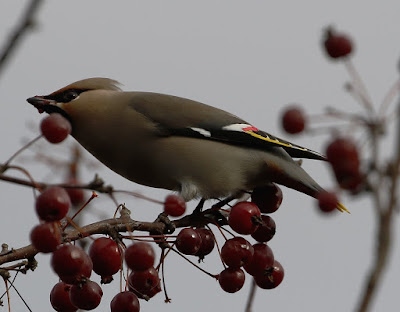 Waxwings have to be high up on most birders must see birds of any winter  and every now and again we in the UK get whats called an 'Eruption' of Waxwings which means a large influx of Waxwings arriving in the Uk due to their main food supply of berries being in poor supply in Scandinavia and /or Northern Russia. 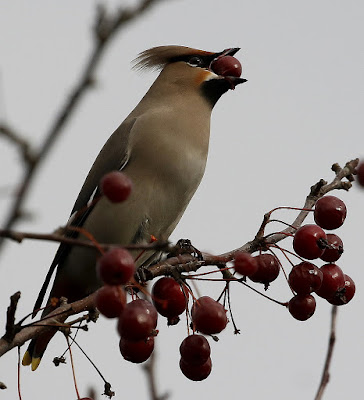 I was delighted to hear that 2 such Waxwings were being seen along Gordon Road Whitstable last week  (there have been 1000's seen all over the UK this winter) , i saw them on both Monday & Tuesday 30th & 31st January. 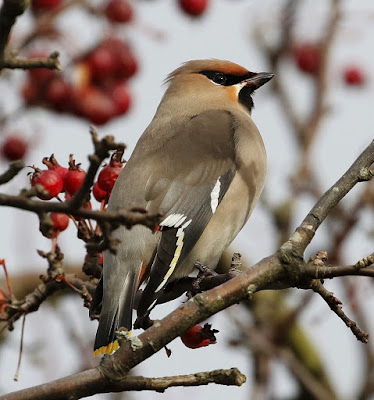 Lovely plumage on these birds.

They were staying loyal to one berry laden tree in particular and were allowing quite close views whilst they gauged themselves on the delicious berries. 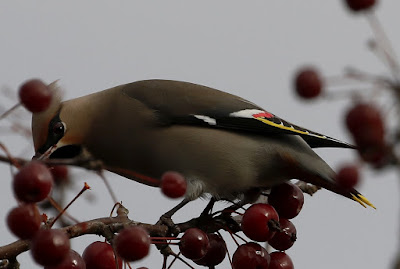 The red wax marking on the wing is stunning. 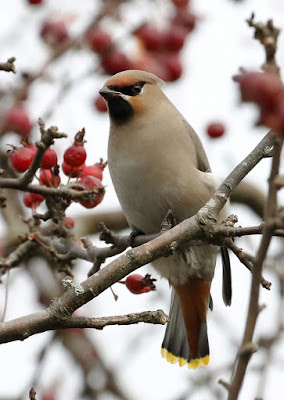