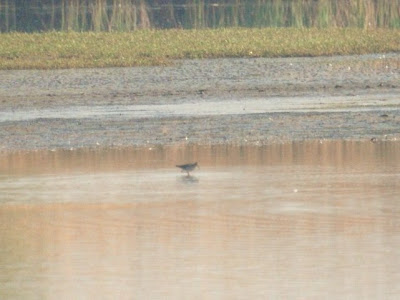 I  headed of to Shapwick Heath for the recently found Lesser Yellowlegs  and although it was a bit to distant to get a decent photo it showed very well through the scope , a really smart wader to see  , hence its name the yellow legs were very evident constantly feeding and every now and again it stopped to have a preen , quite long necked and overall a very delicate looking wader , other birds of note were Hobby, Garden Warbler and Reed Warbler which were all new birds for the year , i heard at least 3 booming Bitterns which was superb and several Common Whitethroats were seen and heard as was Blackcap , Chiffchaff and Willow Warbler , i spent a good couple of hours here hoping the Yellowlegs would come abit closer but it stayed loyal to the back of the pool along with 20 odd Black tailed godwits in their fine summer plumage .

From here i headed of to the Stour Valley in Bournemouth for the adult Night Heron which showed really well compared to the juv. i saw last week , this bird was stunning to see i saw it in flight on a couple of occasions and it was also calling at times. 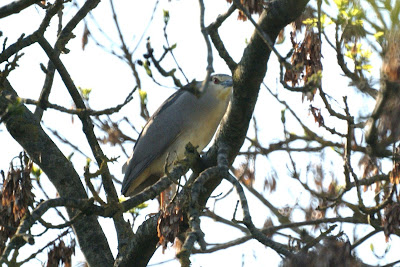 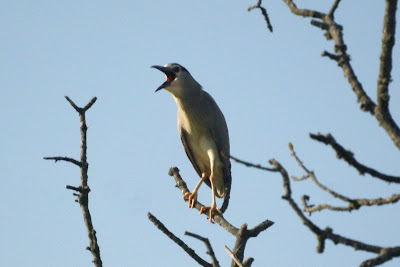 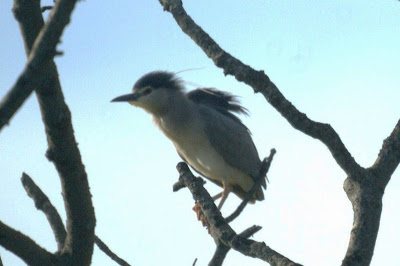 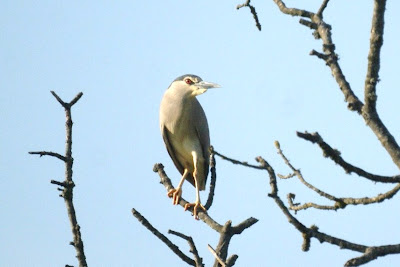 I also heard  a reeling Grasshopper Warbler and i was also treated to a fishing Kingfisher , there were a pair of Long Tailed Tits nest building nearby , a really pleasant location to visit.

I decided to head to Ashdown Forest  and i was rewarded with at least 6 Common Redstarts  , i also encounted several Lesser Redpolls and Common Whitethroats , i stacked out an area and i tried to get a photo of a Redstart , when i  saw a superb Woodlark doing its display flight , quite superb and one of the best sights and sounds  (in my opinion that is) of displaying British breeding birds .

Eventually without success of  connecting with the Tree pipit i headed back to the car  and bumped into another birder who had just seen one and i was soon enjoying a superb Tree Pipit also doing its display flight parachuting from one tree to another . 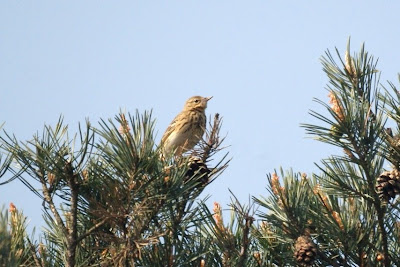 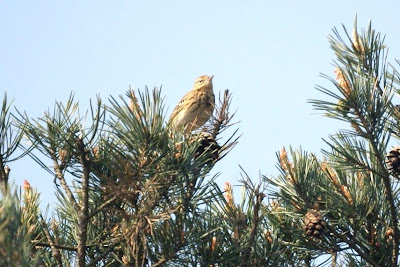 My final destination was Wier Wood to try and see the earlier reported Wood Sandpipers , on arrival and after  scanning a very distant area where the 2 birds had been earlier seen it was not looking at all promising , i did see a Little Ringed Plover , then  a male Mandarin flying over head , a Common Buzzard drifted over and i was about to give up when i saw one of the Wood Sandpipers feeding along the North Bank , although very distant and the heat haze didn't help it was still a much welcome bird to see ,  top quality birding  !!! 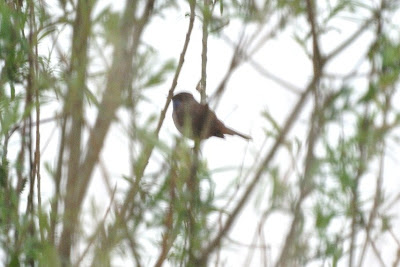 Another busy Saturday saw me heading to Welney in the hope of connecting with the White Spotted Bluethroat , on the road not far from the reserve i saw a really smart Barn Owl , unfortunately i must of spooked it as it took to flight before i could get any photos .

It was great watching it hawking over the fields and along a dyke , i arrived at Welney and made my way to the area of the reserve where the Bluethroat has set up territory and after checking out its more favoured haunts another birder came across it perched in a willow tree , lovely blue throat with reddish just below , white central spot was very evident and reddish tail markings were also seen , it was also calling which is the first time i have heard this call , i watched it for 5 mins when it flew out of sight , i also encountered a rather fast flying Cuckoo which was a first for the year , on the way back to the car i was treated to 15 + House Martins and 2 Sand Martins , and when back at the car i heard then saw a fine Corn Bunting , i also managed a photo of a Pied Wagtail 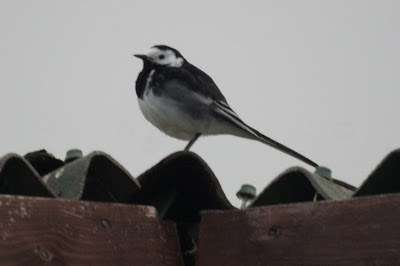 I then headed to the nearby Ouse Washes Rspb reserve and it was not long before i picked out the quite smart looking Blue-Winged Teal  ,  it was keeping company with a female Shoveler and was very flighty , unringed and showed no sign of any wing abrasion . 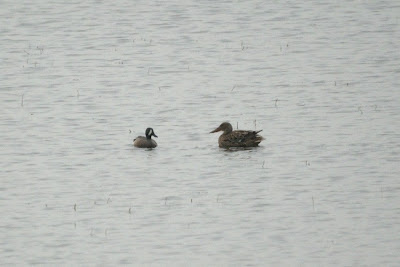 I also heard Cuckoo here and i year ticked 2 Little Ringed Plovers which was a nice bonus, i also saw several Little Egrets and there were plenty of Sedge Warblers in good voice , my final destination of the day was on the way back home ( sort off ) , i went to Two Tree Island for the 1st summer Night Heron , on arriving at the car park l instantly picked up the reeling call of a nearby Grasshopper Warbler , i then made my way around the entrance and eventually i saw it perched in a distant bush reeling away , its tail was vibrating along with its throat whilst it reeled away ,  i also heard and saw several Common Whitethroats here , before i reached the pool the heron had been favouring i heard the superb song of a Nightingale what a treat !!!

The news was rather mixed when i arrived at the pool . it was still there but not in view , damn , my experience with herons is pretty much the same as everyone else , we all know they can sit for hours , well i wasn't wrong nearly 3 hours later i  managed to see it underneath a small tree , it was very  tricky to see and i only managed to get one really conclusive sighting of it , with time against me i headed back to the car very happy after a really great days birding with all target birds bagged , i heard the Grasshopper warbler again as i approached the car .

I have seen many firsts at Stodmarsh , it was one of my very first sites i ever visited when i started birding back in 1982 , these days my travels take me far and wide in this fantastic hobby i have chosen and more often than not when i venture into the Stour Valley these days i tend to go to Grove Ferry and rarely visit Stodmarsh but when news reached me via the pager and then by text ( Thanks Mark ) of the recently found Wood Warbler i could nt wait to try and see it and as luck would have it i got home on Tuesday and spent an hour and a half looking for it with no luck , so with having today of ( hospital appointment in afternoon ) i spent another two and half hours looking for the bird from 11 am to 2pm , and eventually managed to see it really well for approx ten minutes , thanks to a birder who sorry i don't know by name who kindly called me over when he got on the bird, it was delightful to see silvery white below with bright yellow upper breast and head ,pinkish bill and legs , sorry for lack of photo but it was keeping rather deep in the foliage .
other birds of note seen :