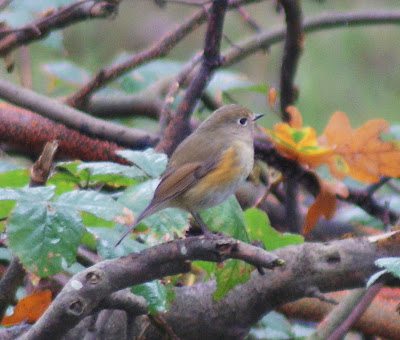 With so many good birds around this last few days i thought a day trip yesterday to North Norfolk was in order , i set of  early this morning and headed towards towards Stiffkey and hopefully see the quite stunning Red Flanked Bluetail that has been there for the last couple of days and i was not disappointed , this stunning bird showed really well coming down to feed on some meal worms that had been put out for it . 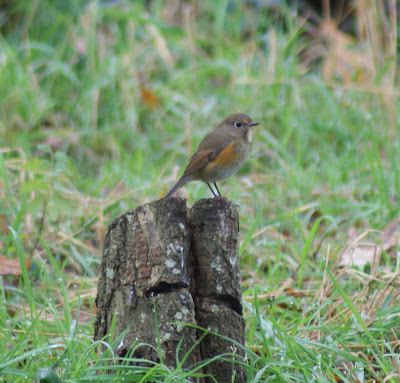 This stump was less than 2 feet away . 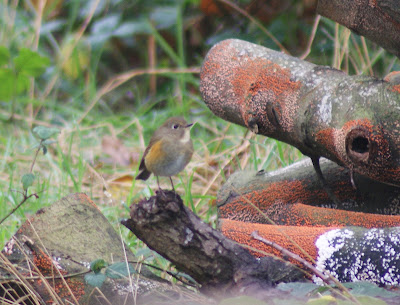 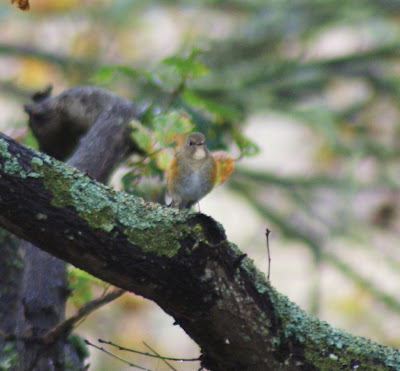 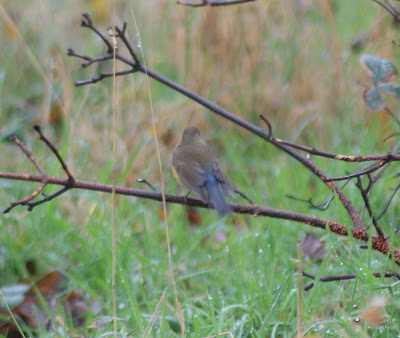 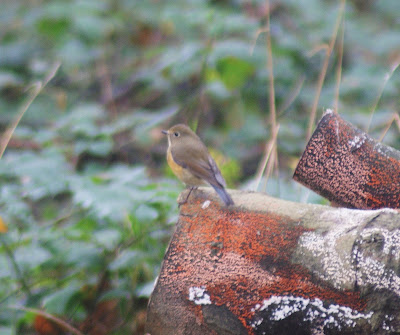 What a beauty this bird is , it favoured a small log pile and was very obliging , there were lots and i mean lots of Robins around and one in particular took a bit of a disliking to the Bluetail , almost every time it came in to feed the Robin would harass and try to chase it off , i enjoyed this bird for over an hour and left very happy indeed , other birds of note here were 2 Black Redstarts , lots of Goldcrest , and hundreds of Thrushes everywhere , the majority of these were Redwing which seemed to be in every hedge row and tree , Blackbirds and Fieldfare were well represented .

I heard news via the pager of an Arctic Warbler in willow trees at Brancaster Staithe so thats where i headed , on route i drove through Burnham Deepdale and  noticed a female Ring Ouzel amongst 30 Blackbirds on a small green , so i stopped and had a look , smart .

On arrival at Brancaster i was not sure of where to go and luckily i met 2 birders who were on route so ie followed them along the coastal path and joined the finder of this smart warbler Graham Etherington , so there were just a handful of us trying to re locate it   and i was the last to get onto it , i seem to have trouble picking birds out high up in canopys !!!!

Graham has some photos on his blog : http://birds-britishbirder.blogspot.co.uk/ , this was  a great year tick for me , the Arctic Warbler showed a really strong supercillum and smallish single wing bar , it stayed mainly high up in the canopy but at times it did show lower down , other birds of note here were Common Redstart , Chiffchaff and several Goldcrest . 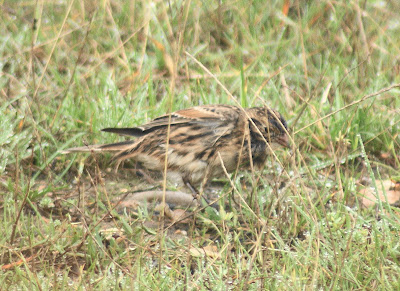 I returned to Reculver this morning in the hope of connecting with the Lapland Bunting which i missed yesterday , it was still very foggy as i walked along the sea wall to Cold Harbour Lagoon , i met 3 birders half way along who had just seen it , so i carried on with fingers crossed , i briefly saw the Shorelark as it flew up from the shingle beach and further down the coast and out of sight , there were Robins , Chaffinch and Meadow Pipits everywhere and despite constant scanning i could not find anything else with them , i did see a Chiffchaff in amongst a small bush the land side of the sea wall as i continued my journey , as i reached the area the Lapland Bunting was last seen there was not a bird to be seen , i walked down the slope and flushed several Meadow Pipits and a single Reed Bunting . 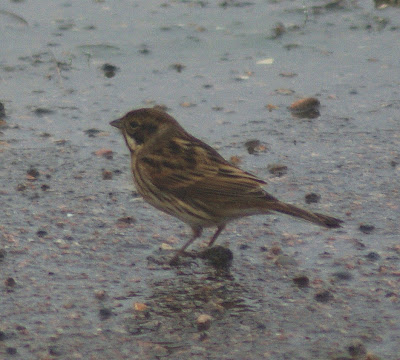 I walked a bit further down the slope and almost stood on the Lapland Bunting , it flew into the grass then flew over my head onto the shingle beach , i managed a few photos. 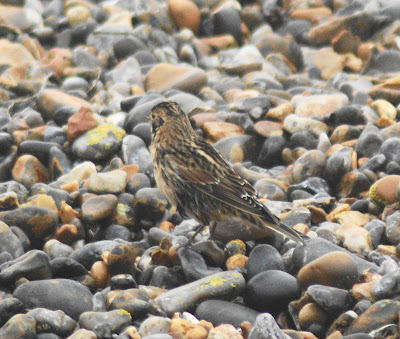 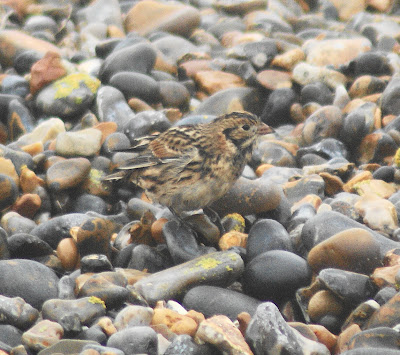 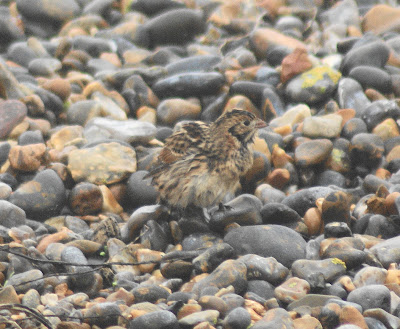 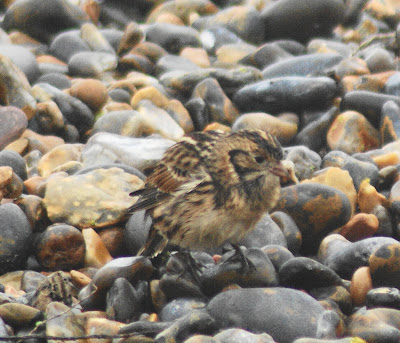 This is the first Lapland Bunting i have seen in the Reculver area and it was a very confiding bird , it flew on the path a couple of times but sadly was flushed each time by either bike riders or joggers , i really enjoyed this bird and headed off back towards my car adding 3 Wheatears and the Shorelark once again in flight .

Reculver in the Mist

Just a short post and sorry for lack of photos , i spent an enjoyable couple of hours at Reculver late this afternoon , i parked up in the car park near the Towers and almost straight away saw a Black Redstart in the company of a couple of Chaffinchs and Robins , then i made my way to behind the Sluice building and instantly heard the Dusky Warbler tacking away , its quite a distinct Tac Tac call , as ever it was keeping hidden in the dense scrub but eventually it appeared briefly at the top of the scrub and was a welcome year tick , i spent a few more minutes here but it had stopped calling and the light was not great so i decided to head off and look for 2 more potential year ticks.

On my way to the sea wall i saw a small flock of Brambling mixed in with several Chaffinch , plus a further 3 Brambling were on the sea wall , i met up with Chris Hindle  and we walked along the sea wall towards Cold Harbour lagoon , on route Matt Hindle located the stunning looking Shorelark , i have seen many Shorelarks over the years but this is by far the best plumaged one i have seen , i was hoping to see the Lapland Bunting but however the time was getting late and poor light meant it had probably already gone to roost , so maybe tomorrow .......
Posted by Robs Birding at 11:14 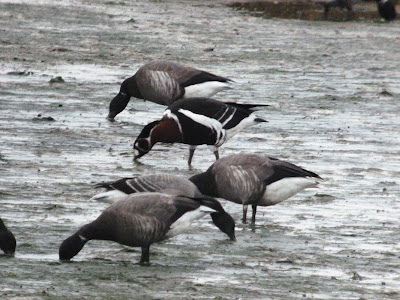 With news of an adult Red Breasted Goose showing well with Dark Bellied Brent Geese at South Swale all week i thought i would have a look on Saturday 20th , this being my first chance as being busy at work all week ,  i parked up near the Sportsman pub at Seasalter and made the long walk along the sea wall towards South Swale , there were plenty of Bearded Tits in the adjacent reed bed plus 2 or 3 Cettis Warblers were quite vocal but as ever not seen . 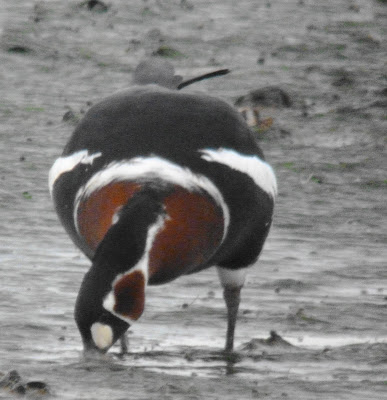 I reached the area the Red Breasted Goose had been favouring and i soon picked it out amongst the Brents , this is an adult bird and did show well most of the time i was there , i think this has a great chance of being accepted a s genuine wild bird , it arrived with over 2000 Dark Bellied Brent Geese and is  unringed , this is  a welcome year tick for me. 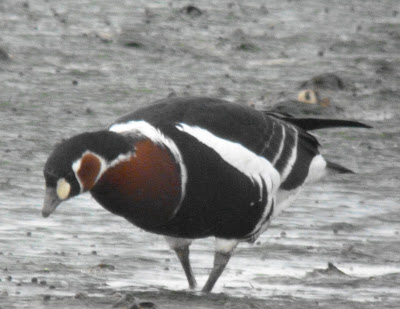 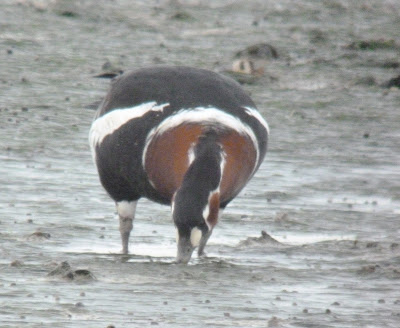 All images were digi scoped.

There were plenty of Wigeon and Shelduck on the Swale , plus a distant Marsh Harrier , after about half an hour all the Geese took to the air and had a fly around obviously spooked by something , i wasn't watching the Red Breasted Goose at the time and i could not pick it out in flight , however they all eventually settled down again further down the Swale  where i managed to see it again and put two newly arrived birders onto it , on my way back i had some great views of the Bearded Tits plus a pair of Stonechats showed well at times. 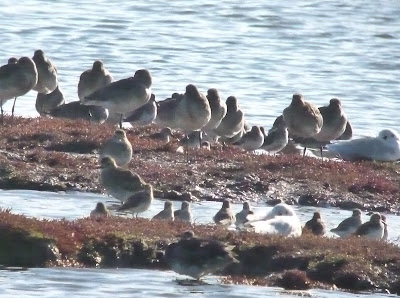 Mixed bag of waders at Oare.

I have recently brought myself some Digi scoping equipment and this was my first attempt at using it , quite clearly i have alot of practise to do to get the hang of it . 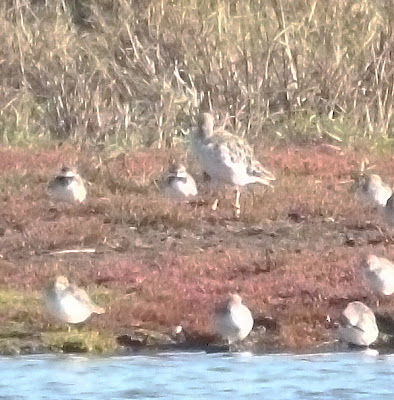 There were a good number of waders at Oare plus there were a few Swallows and House Martins about , i must admit i really was concentrating on photography more than the birds today hence i probably missed most of the decent birds that were around today . 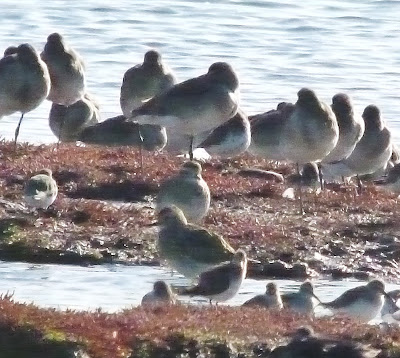 I also popped over to Stodmarsh for a quick visit but sadly missed the Black Necked Grebe and the Kingfisher that had been showing well from the Reed Bed Hide never appeared whilst i was there , however i did have a couple of Lesser Redpoll fly over and Bearded Tit were " pinging " everywhere plus the usual Cetti's were very vocal around the hide