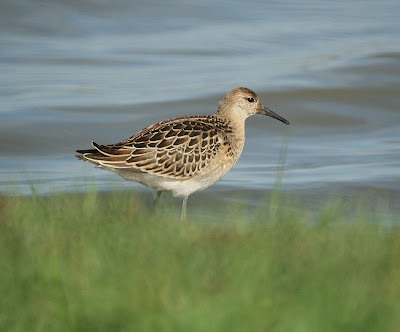 I set of early Saturday morning and my destination was Cromer in Norfolk , my target birds were Greenish Warbler and Western Bonellis Warbler which were both at the same location , i arrived at about 8am and the weather was awful , heavy rain which looked like it was in for the day , however after about an hour of searching the woodland was  in  there was no sign of the target birds or any other birders , i decided to head of to Cley which was only half an hour along the coast and hope for some improvement in the weather and some news to break out on the warblers . 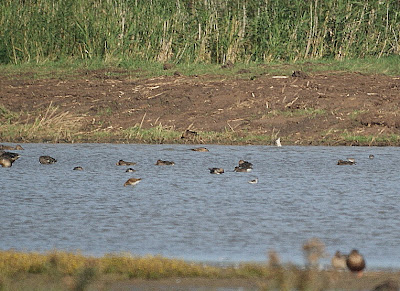 The main attraction on Pats Pool was a superb juv. Red Necked Phalarope which was a  very welcome year tick for me , as you can see by the record shot above it was quite distant but gave excellent views through the scope , there were loads of waders everywhere , the Ruff (top photo) was very close and there were juv. Curlew Sandpipers all over the place with only one moulting adult bird amongst them , i counted 37 birds in total which is the highest amount i have seen in one location. 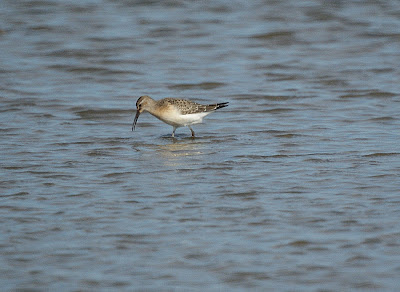 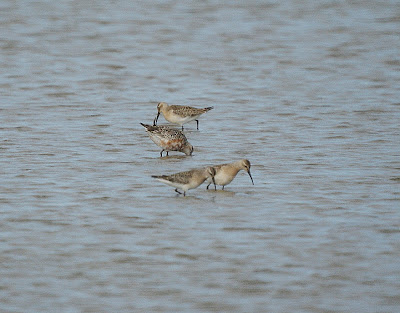 There were groups of Curlew Sandpipers where ever you looked with one group containing 15 birds , i was treated with a really smart Wood Sandpiper which came quite close at times . 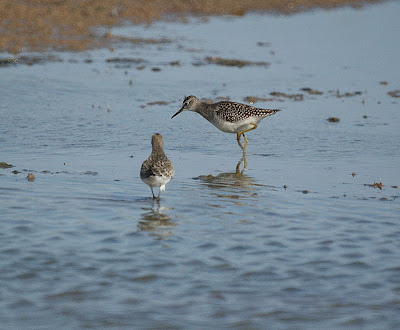 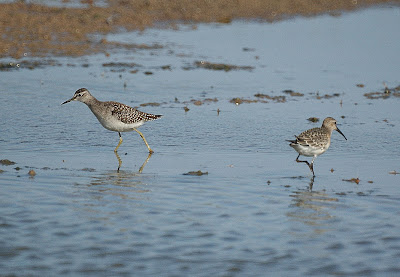 A large flock of Greylag Geese took to the air and 8 Spoonbills just seemed to appear from behind a bank . 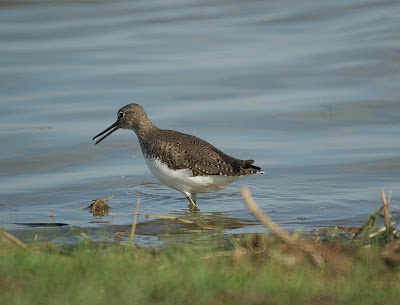 I had a really good session of birding here when the pager alerted me that the target birds at Cromer had been seen , so with just enough time to have another look at the smart looking Wood Sandpiper i then headed of to the car park . 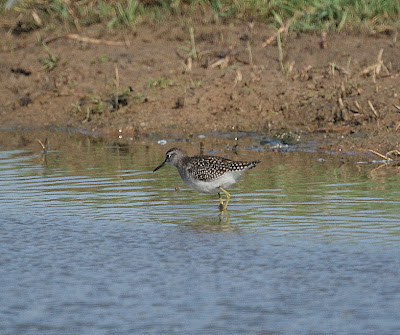 As i approached the car i was informed  that there had been a report of a Red-Backed Shrike nearby which  i needed  for my year list , so with no time to spare i was  soon at Whalsey hill , after a rather frustrating 15 minutes i finally managed to relocate the Shrike on top of a bramble bush , this was a juvenile bird and showed really well at times .

I enjoyed this bird then headed of to Cromer , i again arrived at the site but no birders were anywhere to be seen , which was very strange so after a quick phone call to RBA i was given directions to the right location as i was in totally the wrong area ,( thanks Pete for your help with this ) anyhow as i arrived a couple of birders were heading quite fast towards an area of the woodland and informed me the Western Bonellis Warbler had just been seen.

I followed them and after about 5 minutes wait we were all on the bird , wow the green wing panel on the wings were very evident and the rather pale head and underparts were a real contrast to the rest of the bird , this is my second Bonellis the last one some 10 years ago ! the bird showed for about a minute and was enjoyed by all , when it went out of sight i headed off to the area where the Greenish Warbler had been mostly heard , i was there for half an hour when another birder picked it out calling , then about 20 minutes later it called again no more a foot away from where i was all standing but would not give its self up !!

There were plenty of Chiffchaffs about  , i only saw the Greenish for the briefest moment when it dropped down out of sight , i could see the silvery under parts and smallish size , but was far from satisfied from that view , i waited around but it never re appeared ,   i went back to the car for food and my coat and on the way back news broke that the Greenish had reappeared , this has to be one of my most frustrating birding experience's , i was under a canopy of trees looking up everyone seemed to be getting on the bird except me , yes i saw movement and i again saw the underparts but could not get a clear view , i momentarily went insane at one point and thought about taking up sheep herding or joining the salvation army (No offense to any sheep herders or salvation army people out there) , eventually i did get a brief view so although far from satisfactory i have finally bagged a bogey that i have dipped to many painful times to count . 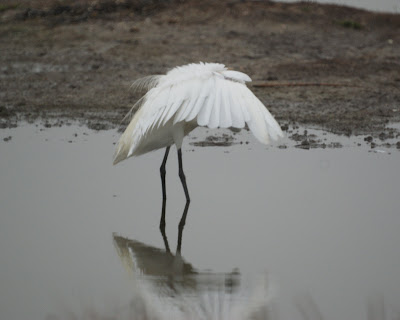 Being on stand by at work today gave me the chance to pop over to Oare Marshes this afternoon , a  look over the East Flood gave me great views of this smart Little Egret , there were up to 4 Knot , and very high numbers of both Redshank and Black Tailed Godwit , at least 10 Ruff and several Avocets were seen . 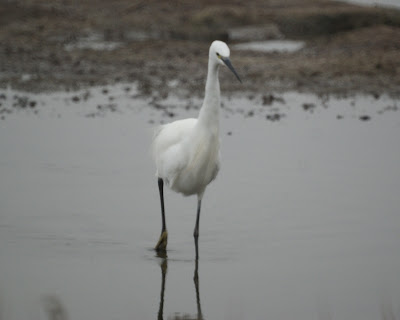 I left the East Flood and headed towards the slip way over looking the Swale in the hope of seeing my target birds which came out on the pager earlier on today , parked up and then noticed Murray Wright the regular patch watcher at Oare and two other birders i didn't know , Murray greeted me with the news the 9 ad Curlew Sandpipers (my target birds) were still there and feeding on the up coming tide line , great i soon got my scope on them and was enjoying some fantastic views Murray and his birding mates said there goodbyes after awhile and i spent another 40 minutes watching these superb waders , i did manage a couple of record shots and even by my poor standards are not that good . 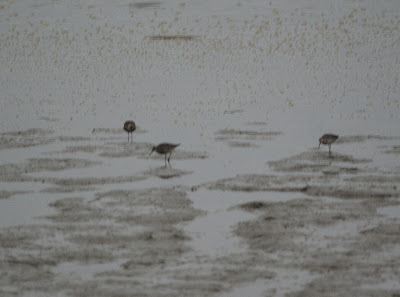 3 of the 9 Curlew Sandpipers 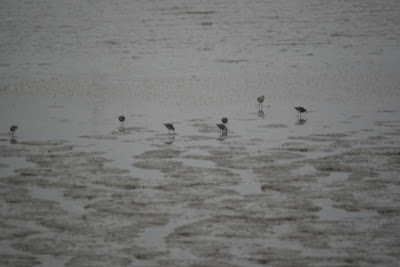 Eventually they took to the air with some Black Tailed Godwits and appeared to drop down into the East flood , i made my there and did  brief scan but could not relocate them but did see 6 Common Snipe and 8 Common Sandpipers .

I headed of to Farthing Downs in Surrey  today and after getting some local information, i arrived on site and within approx 15 minutes i was soon enjoying some stunning views of this really great Hoopoe. Here are some photos i took : 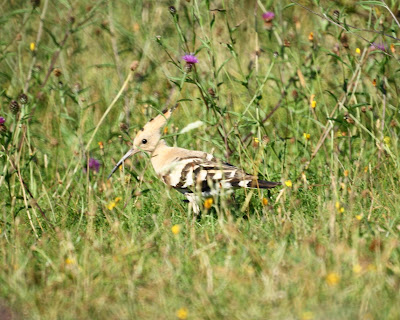 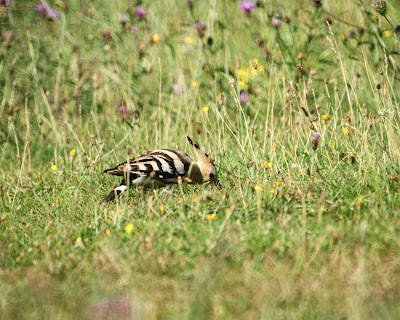 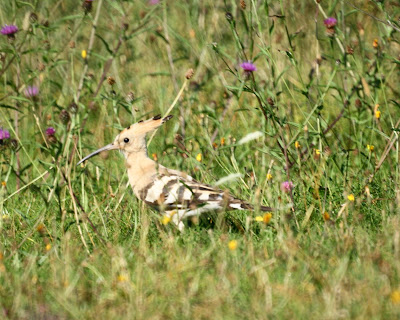 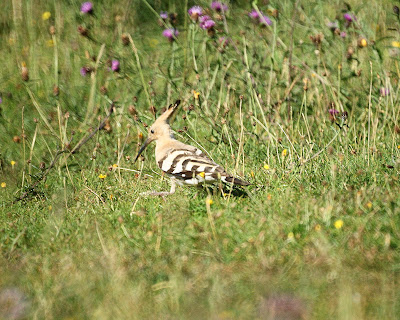 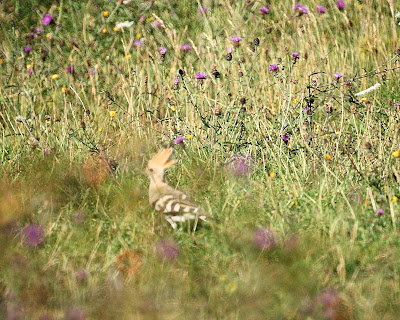 I watched the Hoopoe for approx 45 minutes but it was constantly being flushed by dog walkers who didn't seem to care that I was watching it and before i get a load of dog walkers moaning there were several paths they could have used and not make a be line for me , rant over ...

That said it was very enjoyable to watch in glorious sunshine in a meadow filled with flowers and butterflies which were mainly Meadow Brown and Small Heath , it was surprising how easily the Hoopoe almost disappeared in the grass , i did see it raise it crest once which was  a bonus , i have seen many Hoopoe over the years but get the same thrill as if it was my first every time i see one . 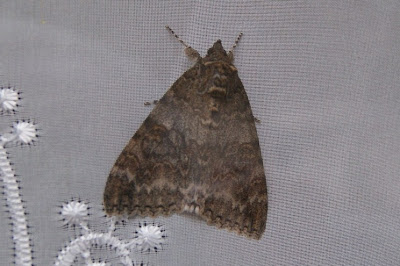 I saw this quite large moth on my next door neighbours curtain as i walked past their house yesterday , i have always had an interest in moths and butterflies , i am ok with most ids on butterflies however i really struggle with moths , if anyone could tell me what this one is called i would be very grateful.
Posted by Robs Birding at 05:50