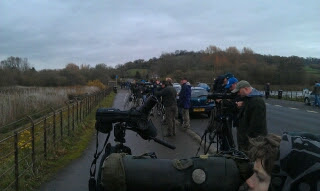 A trip to Chew Valley Lake in Somersett on Saturday 26 th November produced a truly wader spectacle , i arrived at 8.45 am and joined the already assembled birders along the bridge , see above photo ,my main target bird was the juv. Sharp Tailed Sandpiper and i did not have long to wait , it was quite distant but very good scope views were obtained ,  the white supercillium especially behind the eye was very noticeable , the buff tinged breast was also very noticeable ,  i bumped into Nick and Russell .G. who were quickly onto the bird and this was a new species   for Russell as well and a very welcome year tick for both Nick and myself . Sadly i didn't get any photos as the bird was to distant and was quite flighty . 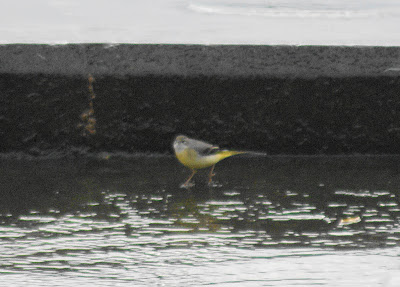 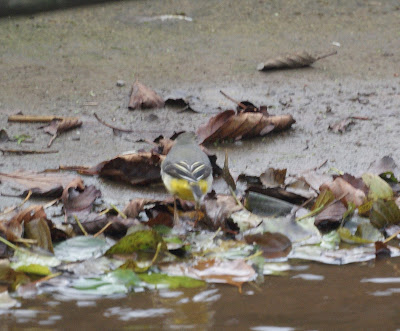 On the other side of the bridge there was an adult winter plumage Spotted Sandpiper which showed every now and again , my best views of this were in flight , there was also  a close Grey Wagtail, later in the morning the 2 Long Billed Dowitchers  were seen and once again to distant for any attempts at photos , there were hundreds of Pochard , Tufted Duck , Shoveler and Teal plus i saw 3 Bewicks Swans , Russell picked out a distant Peregrine which was good to see .

i then  decided to head of to Blagdon Lake to try for the Ring Necked Duck so i said my goodbyes to Nick and Russell and headed off there via the visitors center where i tucked into pastie and chips and got my permit . 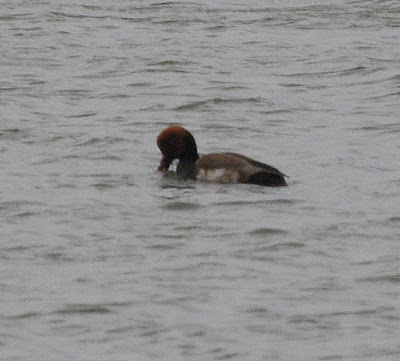 I had no luck with the Ring Necked Duck but did add this smart Red Crested Pochard to my year list   I also saw a smart Long Tailed Duck and female Goosander which i added to my days total , i spent about an hour here and also added Slavonian Grebe and a lone Roe Deer then i decided to go back to Herriots Bridge for another look at the Sharp Tailed Sandpiper , i got some more distant but good views of this plus i re located the two Long Billed Dowitchers which were by a massive looking Black Tailed Godwit in size comparison , on the way home i saw  2 Red Kites which added to the earlier count made 5 in total today , a really enjoyable day with top quality birds  .

I managed a couple of  photos of a Black Headed Gull and a Mute Swan during the day. 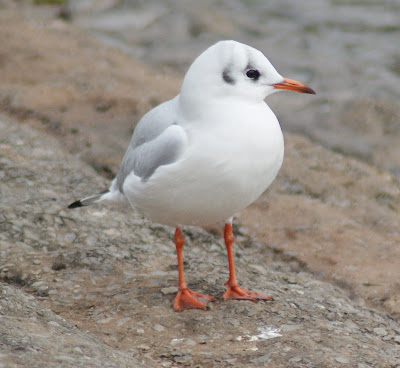 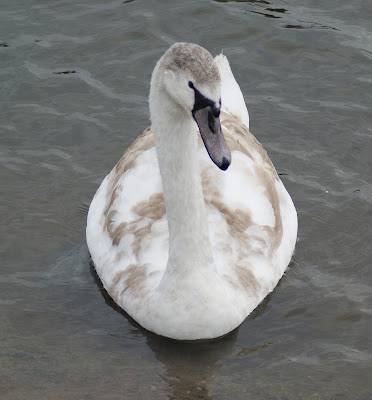 Not much to report over the weekend , i had planned to go for the Blackpoll Warbler in West Kent but decided to wait on news before making the trip , however the news come back as negative .

Now back to the Thanet Way , on my way to work yesterday i had a really smart view of a female Merlin flying fast and low across the Thanet Way between the St Nicholas and Monkton roundabouts and later in the day on my way back i had just passed Whitstable when a really graceful Barn Owl drifted past in front of me and landed on a post .
Posted by Robs Birding at 01:46 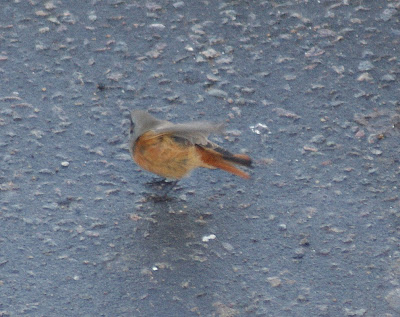 I popped down to Margate Sunday morning to have a look at the Eastern Black Redstart ( form Phoenicuroides )  and what a really smart bird to see ,  according to Uk400 website its the first confirmed record of this race in Britain , as i said a really smart bird and totally different in overall plumage to Black Redstart , according to the experts in this field its the separation in primary feathers that clinches it as a Eastern Black Redstart plus i believe it was confirmed after some droppings were taken and the DNA from this confirmed it . Here are some more photos : 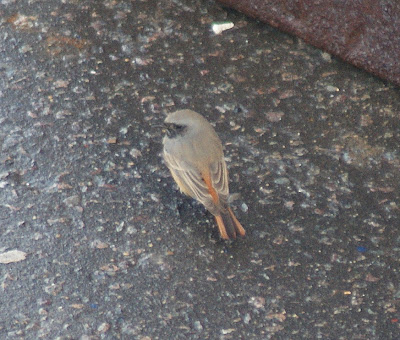 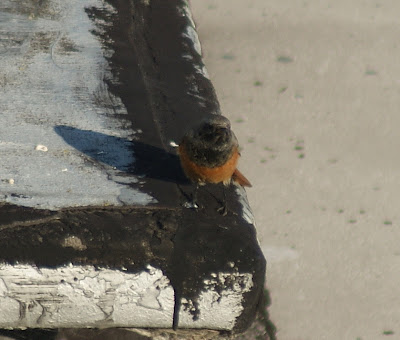 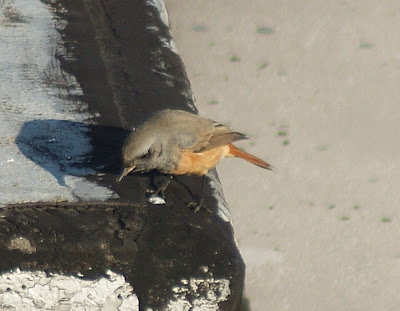 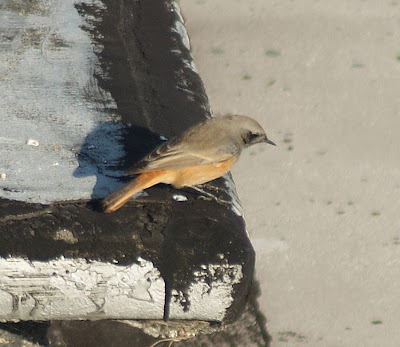 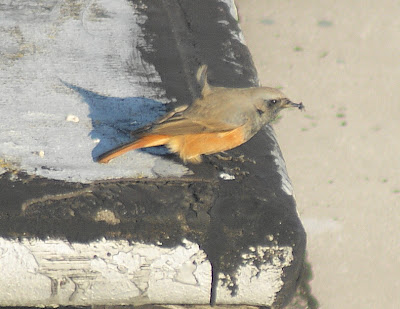 It seemed to be feeding well.

There were a few other birds around and i managed a photo of a normal Black Redstart for comparison . 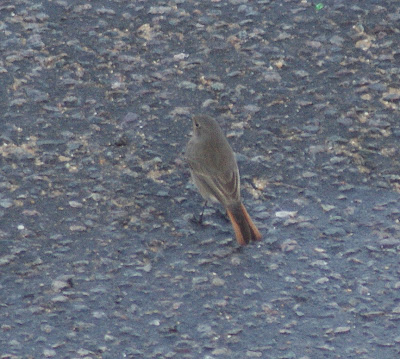 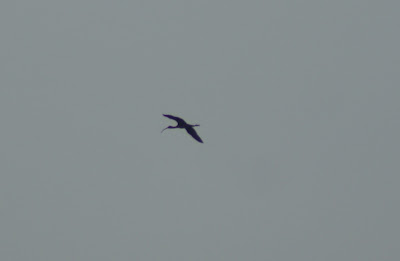 I spent a couple of hours at Stodmarsh this morning in the hope of seeing the Glossy Ibis and to catch up with the recent sightings of Water Pipit from the Marsh hide , on my way around to the hide i bumped into the regular Stour Valley birders Martyn , Adam and Chidders , it was great to meet up with them as i often neglect local birding when i am of in pursuit of some far away rarity , they informed me that the Glossy Ibis was still on view from the Marsh hide and they had up to 16 Water Pipits whilst they were there , so after saying our goodbyes i headed off and once in the hide i did a very quick scan and couldn't find the Ibis , had it flown off or walked behind some reeds ??

Then all of a sudden it flew in from behind the hide and landed right in front of the hide only to be flushed by a very close Marsh Harrier , i did not get a photo as it was to quick but managed a flight record shot ( see above ) and i got a couple of the Marsh Harrier . 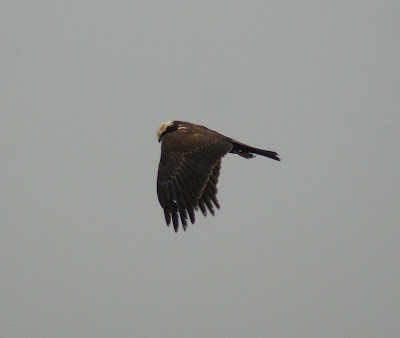 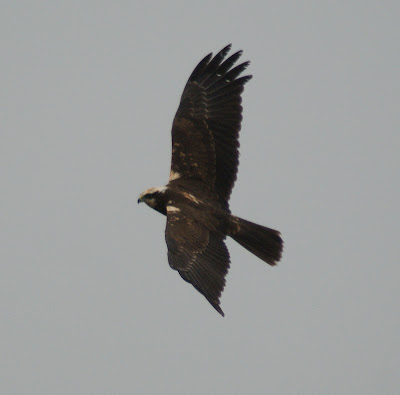 I then checked out the pipits in flight which were spooked by the Harrier and counted at least 10 Water Pipits plus several Meadow pipits , eventually they all landed out of sight although later in the morning 3 Water Pipits flew out of the grass onto the mud but were abit distant  to try even for a record shot , however the Glossy Ibis had re appeared at the back of the pool. 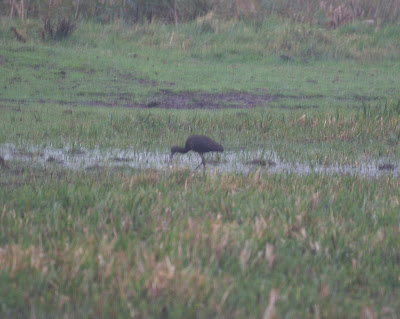 This is a really smart bird with light buff speckling on the nape , it had a curious feeding motion in the way it constantly opened a shut its bill at a very fast rate , great bird to see .

Other birds of note were  3 Fieldfares , Common Snipe , Sparrowhawk and a fly over Siskin , there were several Cetti's sounding off here and there plus 3 Bearded Tits pinged their way across the reeds .