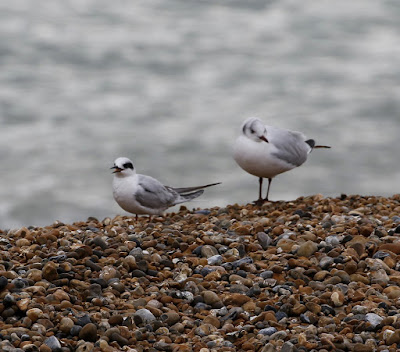 Forster's Tern on the Beach.

I was deciding where to go today when news broke from Folkestone of a 1st winter Forster's Tern showing well along the parade , so without any hesitation i grabbed my birding gear and headed straight there.

When i arrived i joined the already assembled birders and saw the Forster's Tern straight away roosting on the pebble beach amongst the  Black Headed Gulls. 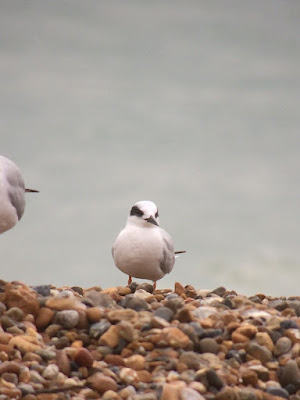 Roosting on the beach.

I really enjoyed watching this cracking looking tern , i have seen one before many years ago in North Wales  on Anglesey however this is the first one i have seen in Kent and i believe it's only the 2nd ever one recorded in Kent. 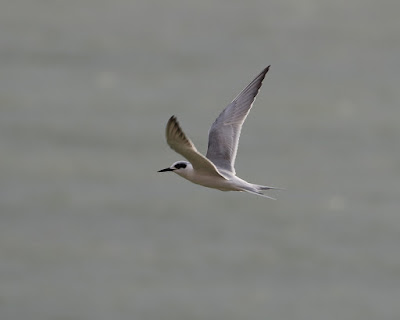 The Forster's Tern soon had a fly around going far west and then returning east along the parade constantly diving for food . 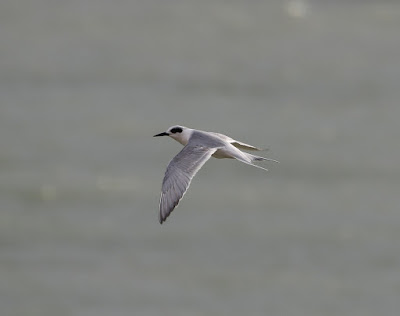 I watched the Forster's Tern for a good hour before heading of home , the Tern was roosting on the beach when i left , hopefully it will stick around for a few days so everyone can enjoy this bird.

It's been travelling around the east coast over the last week or so first being seen in Essex and then moving north to Suffolk but had gone missing for a few days and luckily headed to Kent. 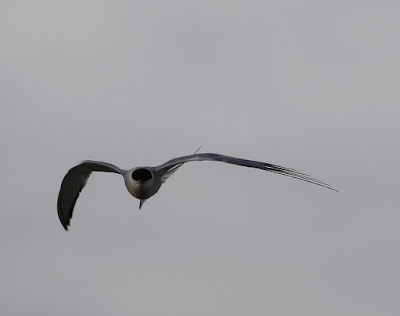 There has been a Common Tern hanging around Ramsgate Harbour for awhile now so i decided to have a look as i had not seen one this late in the year before. 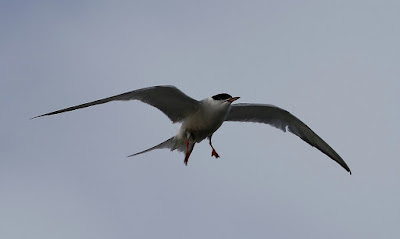 There has been some discussion on the identification of this bird but i am quite happy it's a Common Tern . 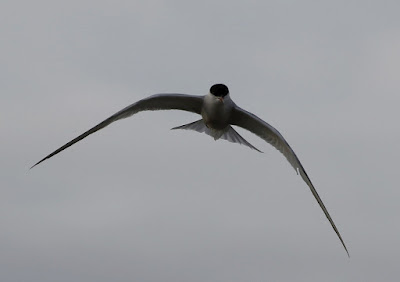 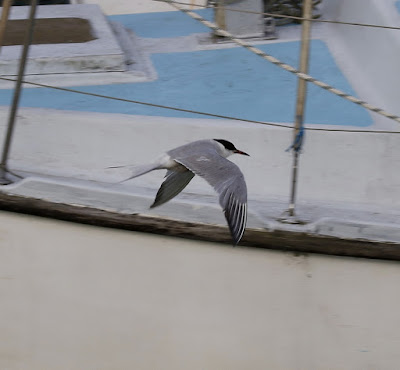 There is a good chance it will over winter at the harbour so my latest record could still be beaten yet !!!! 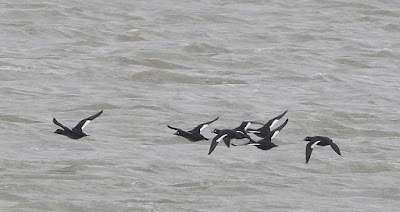 After hearing news of 7 Velvet Scoters showing well near the sea watch hide at Oare Marshes yesterday the 12th November i decided to have a look myself as i had never seen Velvet Scoter there before , as pulled into the car park near the slip way the heavens opened and it was also quite windy walking along the sea wall. 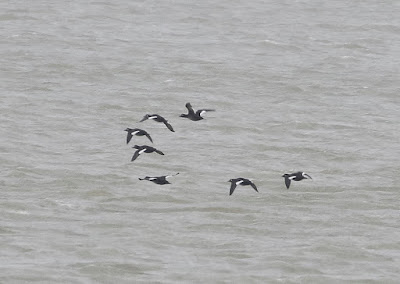 I eventually reached the hide and joined fellows birders sheltering from the elements and was soon looking at the 7 Velvet Scoters , which were just bobbing about on the Swale and after awhile they flew off down the Swale towards Uplees , then i was put onto a Black Necked Grebe which was a bit further out. 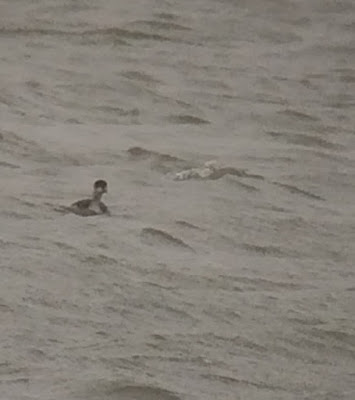 I also saw 3 Common Scoters which was an unexpected bonus and having checked my records all 3 species are new additions to my Oare marsh bird list. 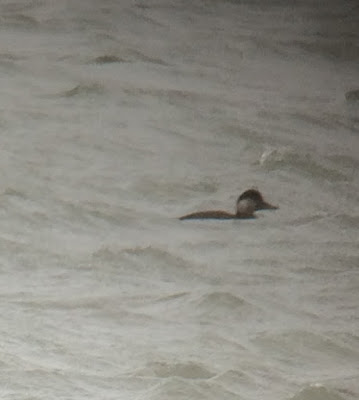 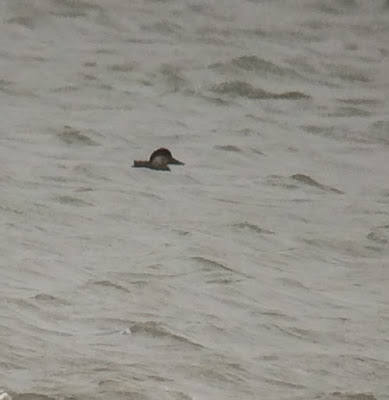 A Peregrine flew along Faversham creek spooking everything plus a distant Marsh Harrier was seen over Nagden marshes , a close fly by Sparrowhawk and a single Kestrel over the East flood completed the birds of prey seen. 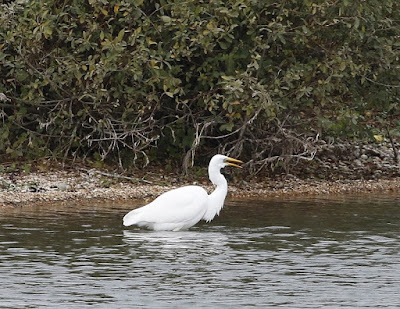 I have been thinking about upgrading my camera lens for a few months and decided to get the Canon EF  100-400mm f/4.5-5.6L II USM and i took it out for a field test at Dungeneess on Friday , i wanted a lens with image stabilization and also one that would allow close focusing ,  and so far so good with this lens , i did read alot of reviews and spoke to a few birders who have this lens and all gave positive feed back (only one person i spoke to thinks this lens is no good) . 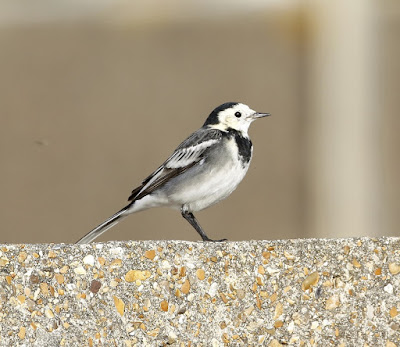 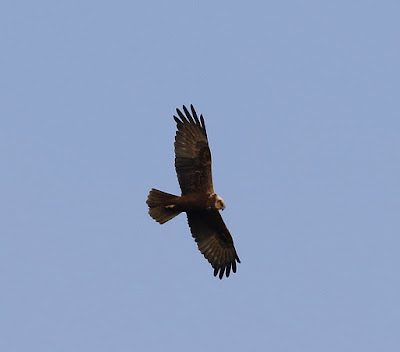 I guess only time will tell if i made the right decision with this lens but so far i am very pleased with it . 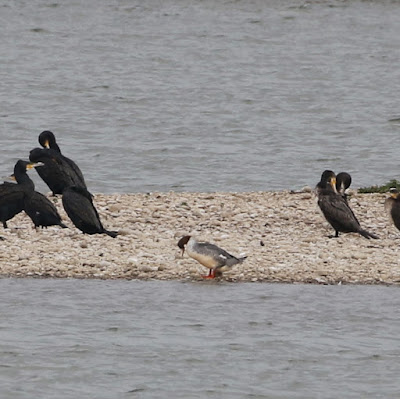 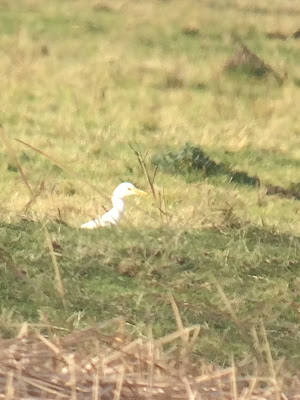 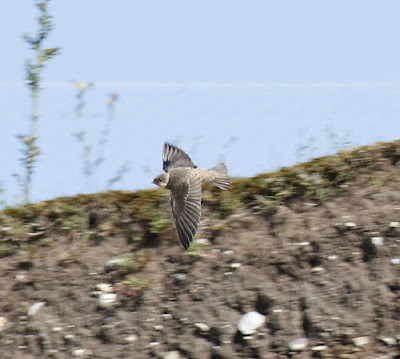 I travelled up to Minsmere Rspb reserve on Saturday afternoon the 5th November and had fantastic views of the Cliff Swallow which was flying around the Stone Curlew field behind the Sand martin sand pits.

Having had very poor views of the Cliff Swallow on St.Mary's earlier this autumn (really unsatisfactory for a life tick) i was very relieved to see this stunning bird at Minsmere.

The Cliff Swallow flew right in front of it's admiring crowd several times and all features were superbly seen at close quarters.

It also perched on a small bush at one point and i had good views through the scope but unfortunately it took to the wing again before i could get a digi scope photo of it.

Unfortunately i couldn't take any photo's as i am waiting for my new lens to be  delivered next week however there are some fantastic photos online of this cracking bird.

I also saw a very late Sand Martin which beat my previous late record of this species , also there were several Swallows plus a Ringtail Hen Harrier was being mobbed by a Marsh Harrier , a Peregrine was also seen whilst watching the Cliff Swallow .

Many thanks to the staff at Minsmere for a very well organised birding session,  a really top quality birding session and meeting many old & new friends was a real bonus , i went home very , very happy with Cliff Swallow flying onto my life list.