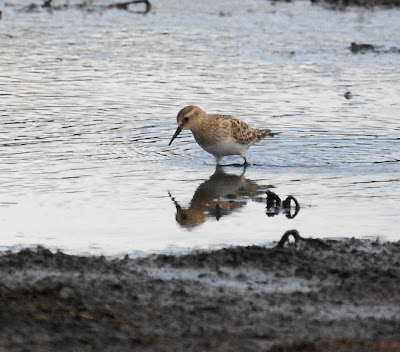 I went  to Pennington Marshes in Hampshire on Saturday 17th , my main target bird was this really smart Bairds Sandpiper . 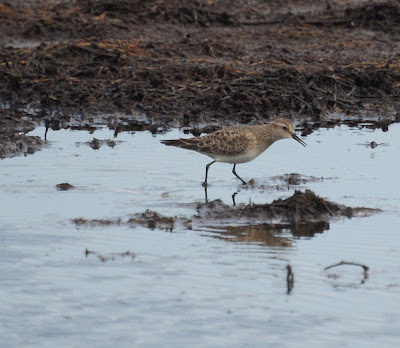 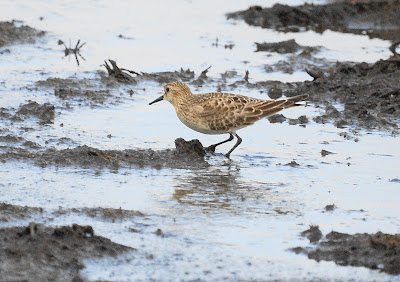 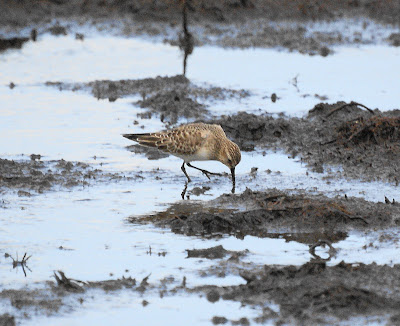 The Bairds Sandpiper was smaller than the nearby Dunlin , a really smart bird to observe , feeding constantly and showing very close at times , all the waders were spooked by a Kestrel which flew through the area where they were feeding , all the waders took to flight and the dark central tail feathers were easily seen on the Bairds Sandpiper. This is the fourth Bairds i have seen and by far the best view i have had of one.

I headed of in the general direction the Bairds Sandpiper had flown of to and despite scanning various parts of the estuary drawing  a blank , i decided to head back to the original pool i had first seen it in and on my way there i noticed a gathering of birders checking out some bushes and i was informed that yesterdays Wryneck had been re found but was being very elusive , however i had only been there for a couple of minutes when the  Wryneck  was picked out sitting in a slow bush , i had  really great views of this wonderful bird and i never tire of seeing them. 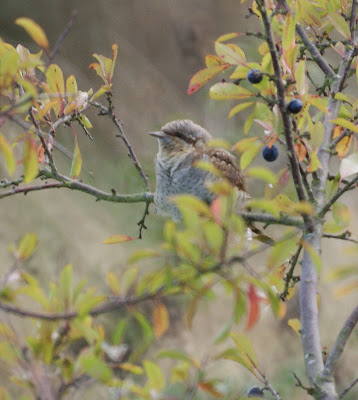 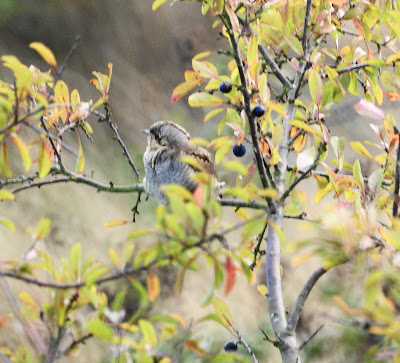 After i had my fill of these great birds i headed of to the nearby Normandy marsh where there had been a report of a Grey Phalarope , i arrived on site and was soon enjoying really good views of this smart wader feeding in its usual circular motion. 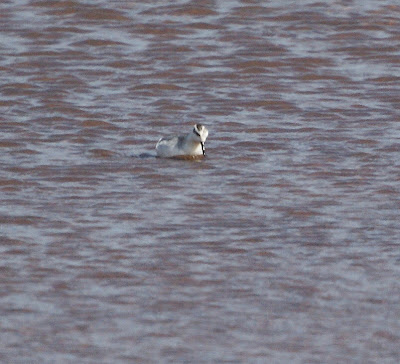 Other birds of note here included a juv. Curlew Sandpiper , plus up to 3 Greenshanks , Black and Bar tailed Godwit , several Turnstone , Ringed Plover and Dunlin , i also en counted at least 3 Kingfishers here .

With time against me i headed for home  , however i had just enough time to call into Thorny to check out news of a Sabine's Gull but my luck run out with this one , i did add Common Sandpiper , Little Egret and Sandwich Tern  plus  several Yellow Wagtails flying around the nearby cattle . 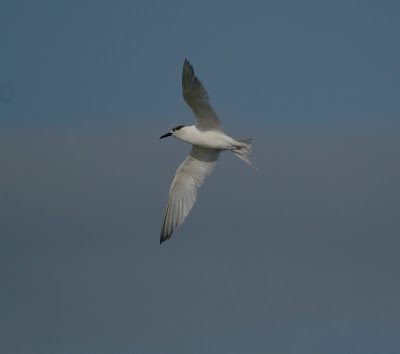 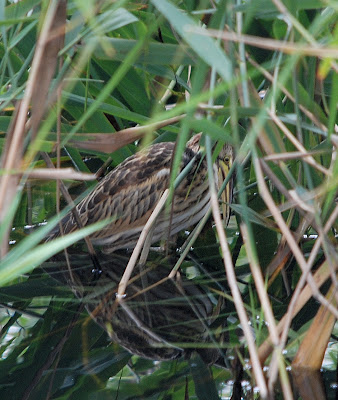 A trip to Titchwell rspb reserve  on Saturday 10th was amazing , i was hoping to connect with 3 target birds , Little Bittern , Cattle Egret and Buff - Breasted Sandpiper and i was not disappointed , i started of first for the Little Bittern which had been seen briefly the day before and only in flight before i got there , so i thought my chances were pretty slim to be honest , well i could not believe my luck , i had only just settled along side the large gathered fellow birders when it appeared more or less right in front of us , what a really smart bird , it was just creeping along the reeds slowly giving us all some excellent views , in the rush of birders desperate to see it my coat and scope were lost in the crowd ( i did find them later ...lol ) being a bit short i was struggling to see over the reeds to get a better view but eventually it appeared right out in the open whilst it was moving through the reeds . 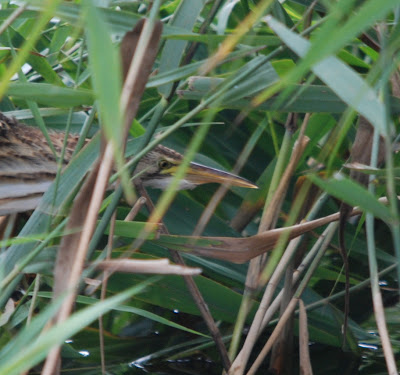 Another view of the Little Bittern.

I watched this bird for a good length of time before it moved out of sight , this was  the first one i have seen since the eighties !!! I decided to move on to see if i could re locate the Cattle Egret which i needed for the year list ,  i walked along the main track when i saw two birders getting excited setting up there scopes as i approached them and sure enough  they had   re located the Cattle Egret  perched in the distant dead trees the Harriers normally use , i then moved onto the new hide at Titchwell and was soon enjoying the Buff- Breasted Sandpiper , really like these birds unfortunately it was a bit to far for a photo but great views through the scope was seen , there were Redshank , Ruff and a really smart Spotted Redshank nearby , a really great visit.

I decided to have another  for the Little Bittern and would you believe it  once again i more or less saw it straight away , simply stunning .  I took a photo of this dragonfly , not sure what it is but very smart looking all the same .
After a little bit of research i believe the Dragonfly above is a Migrant Hawker . 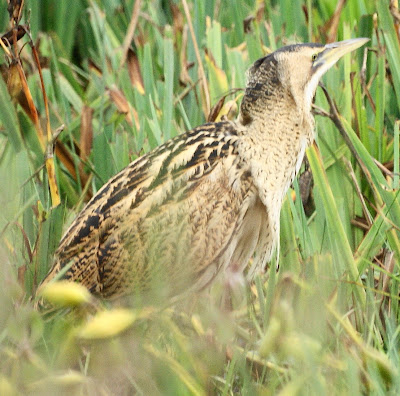 I had a very pleasant few hours this morning / early afternoon at Grove Ferry , i started of at the viewing ramp where there were approx. 250 Lapwing with equally large numbers of Teal , there were a scattering of Shoveler, Gadwall and Mallard among them , several Bearded Tits were " pinging " nearby giving glimpses here and there , then i picked out among the Lapwing a very elegant  Spotted Redshank , smart , from here i headed out to the Marsh hide in pursuit of the recently fledged Bitterns ,   i bumped into Steve Ashton and another couple of birders in the hide and we all enjoyed a couple of hours watching these delightful juvenile Bitterns . 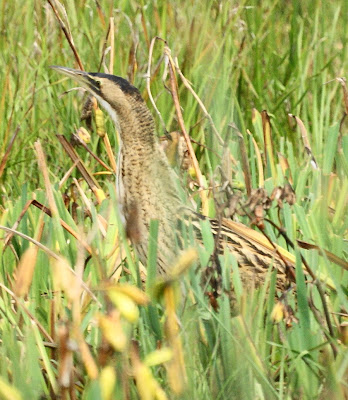 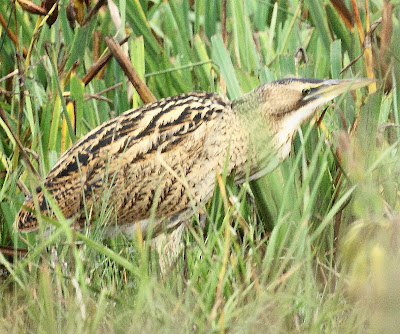 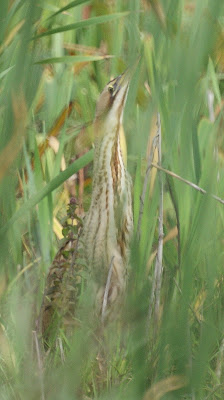 These were great to see , and very interesting to observe , they were feeding well and and at one point the adult bird joined them with all 3 juvenile birds flying to her , the adult bird did not stay long before flying off over the path and out of sight , there were at least 2 Green Sandpipers around plus a Ruff flew into a distant pool , a Little Egret put in an appearance as did a couple of Grey Herons. 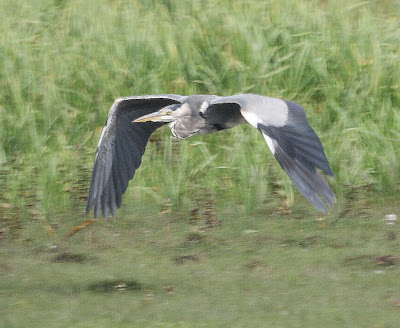 There were a couple of Common Snipe around plus several Stock Dove were seen over the adjacent fields , from the marsh hide i headed back to Harrisons hide for a quick look which did not produce anything to be honest , however i did see this on the path . 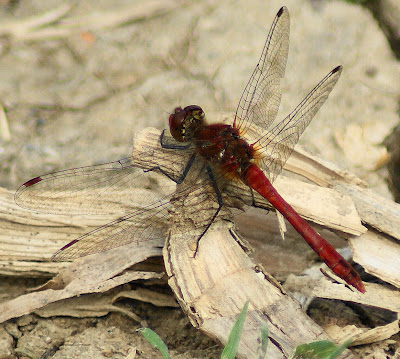 Think it might be a Common Darter ? , if anyone has any ideas please let me know , a final look from the viewing ramp produced a single Black Tailed Godwit plus several Swallows over head and a Cetti's Warbler blasting away in the distance , a really enjoyable visit with good company and excellent  birds .
Posted by Robs Birding at 08:52