Its a bit Ruff at Oare 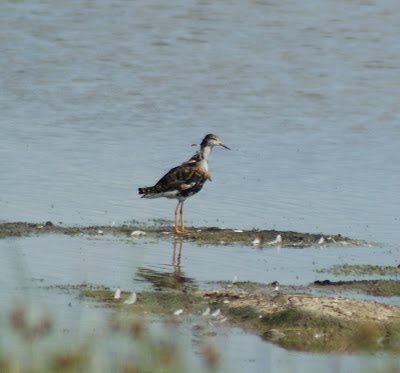 I spent a couple of hours at Oare Marshes today in the hope of getting some better photos of the Bonapartes , well i could not locate it , i guess it was somewhere in Faversham creek as the tide was out , my other target was to see the 2 Ruff which were in great plumage , i quickly found the one which is partial summer dress , and this bird showed well quite near the pull in on the East flood . 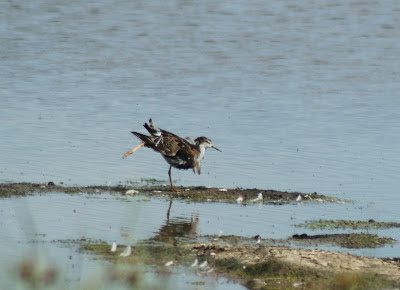 Ruff having a stretch .

After a scan with my scope i located the 2nd Ruff which is in stunning plumage , it has a lovely golden ruff , with great plumage detail on its wings and mantle , it is also coloured ringed , it remained in the middle of the east flood the whole time i was there and was always just to far away to get a photo . 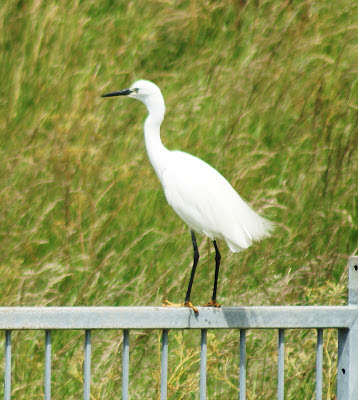 I decided to walk around the east flood to Faversham creek and ventured past the hide and as i approached the sluice i flushed a Little Egret  from a nearby dyke , well i don't know who jumped the most , me or the egret , it did not fly far before landing on the railings by the sluice . 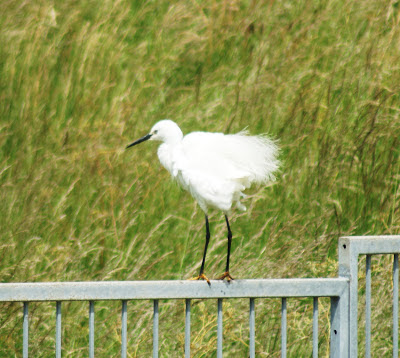 I then walked along Faversham creek to look for the Bonapartes without success however there must of been a billion midges along that route which made birding abit uncomfortable , i did hear a couple of Bearded Tis which put in a brief appearance before disappearing into the reeds , however a male Reed Bunting posed for the camera . 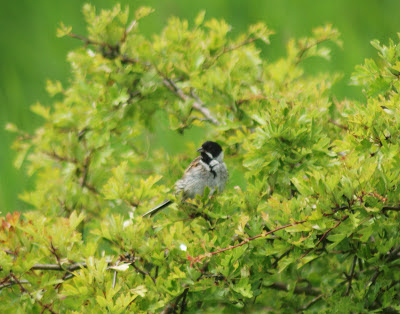 I did not add much more along here and ended back at the East flood , there were some really smart Black Tailed Godwits in various plumage colouration , Avocets were well represented and there was a single Oystercatcher in with the Godwits , i had another scan across the flood and the male Ruff  was still feeding in the same areas as earlier , i had a Hobby fly over head a couple of times and then decided it was time to head home for a well earned mug of coffee . 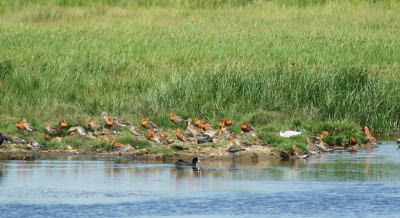 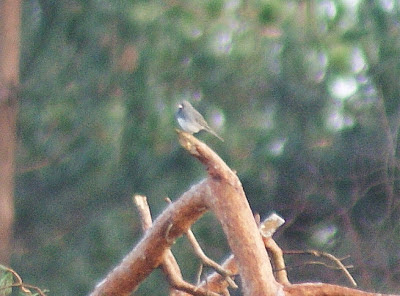 Indeed the quiz bird of last week was a Dark Eyed Junco and very well done to everyone who got the correct answer and they are : Ephraim Perfect , Martyn Wilson ,  Mick Davies , Chidders , Marc Heath and Phil Parker .

Unlucky for those who got the wrong answer and thanks for everyone who gave it a go .

This weeks quiz bird i saw on Scilly , its quite a scarce migrant there , so if you fancy a go just leave your answer in the comments and i will post names of all correct entries next Saturday,  good luck . 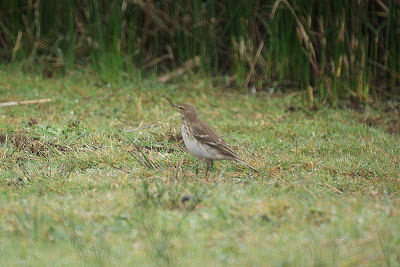 Did not do much birding over the weekend , although i did hear and see a Corn Bunting near Ramsgate which was a new bird for my year list .

Had a very good response to the Quiz this week so if you fancy ago you have until Saturday to come up with the correct answer , good luck to all.
Posted by Robs Birding at 03:04 No comments: 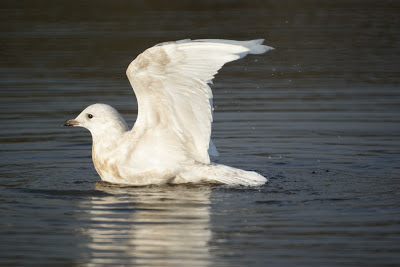 Iceland Gull was last weeks mystery bird so well done to :  Julie Hargreaves , Chiddy and Ben M ( Kumliens Gull is a race of Iceland so that counts in my book ) for getting the right answer is last weeks quiz.

Unlucky for those who got the wrong answer , its only a bit of fun and thanks for everyone who had a go. 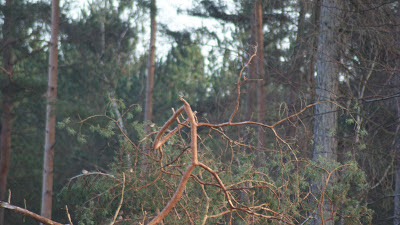 You will need a very good set of eyes to see this bird , i will give you a clue , i saw this bird last year in the New Forest ........  Well good luck and i will post names of all correct entries next Saturday . 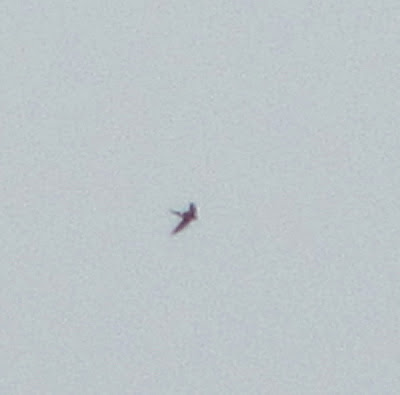 
I was unable to go yesterday so i waited on news this morning before deciding to head to Trimley Marshes and sure enough my pager bleeped into life at about 7.25am and the news was positive , i had a 2 hour journey before i was on site and then another approx 3 mile walk to the marshes which felt like 2 hours to get there !!!!!!!!!!

I eventually arrived and joined the masses of birders and although through out the walk news on the pager kept confirming the bird was still present and this helped keep me motivated on my walk , i heard a single Nightingale plus 2 different Lesser Whitethroats  and a single Blackcap on my trek , however the target bird had gone missing by the time i arrived , shock , horror and $+@& came to mind .

After about an hour after constant scanning of the quite distant Common Swifts  i was beginning to feel quite despondent , and then a rumble from further down the line of birders confirmed someone was onto it , wow , great , joy all filled my heart however i could not locate it and then it was gone !!!!!!!!!!

Someone shoot me please , well that's how i felt at the time , i bumped into Nick and Russell  and we were chatting when it was relocated again , this time i was determined not to miss it , i scanned the area where the bird was flying , nothing and then wait , my god I've got it , the Pacific Swift flew right into my line of vision , its white rump and slightly longer wings were very evident , i managed to get it in my scope and proceeded to  watch it for quite some time , it flew low over the lagoons giving some great views before flying high towards the nearby cranes  and then over the river before flying back again and then high up into the sky . I then walked back with Nick and Russell in very high spirits and the walk back did not seem so long .  Just like to say thanks to Russell for the use of his photos. 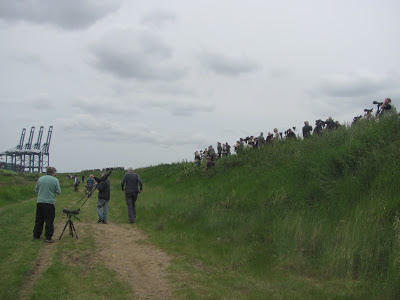 Selection of  the crowd photo by Russell . 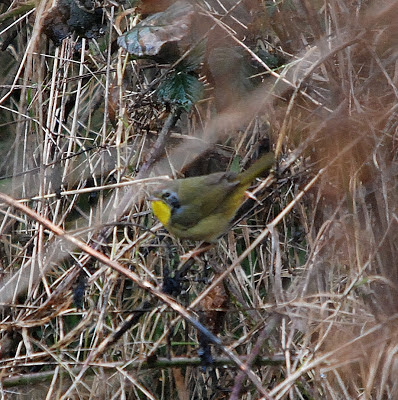 Indeed last weeks quiz bird was in fact a Common Yellowthroat , well done to those of you who got the correct answer and you are : Jonathan .F. ,   Mick Davies , Mick Southcott , Kit from Surrey and Chiddy
Unlucky for those of you got the wrong answer at least you gave it ago . 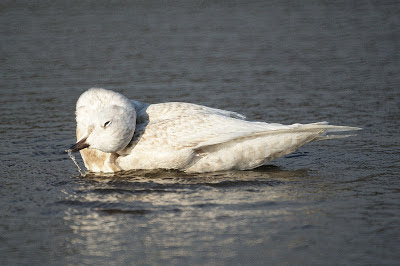 So here is this weeks quiz bird , good luck , just put your answer in the comments and i will reveal all next Saturday .

Having been tied up most of the weekend with family stuff plus other bits and bobs i finally had time to pop out and see the Black Kite which was only 20 mins from my house , i got there at 6.55 pm and joined 4 other birders and after a 15 minute wait one of the birders picked it out quite low flying between the trees , It eventually flew low over an open field .

I watched the Black Kite   soaring around gaining height and eventually giving superb views through the scope , this is my second Black Kite in the UK and both of them have been in Kent.

Just to say i have had a good response to the " Just for a bit of fun " quiz and will post the correct answer and names of everyone who has got it right next Saturday , so you still have until then to give it a go .
Posted by Robs Birding at 12:37

Just for a bit of fun i am thinking of doing a weekly quiz as birding begins to quieten down during the summer months , sorry no prizes or league table , if it proves popular i will post one picture a week  and you will have a week to try and decide what the answer is . 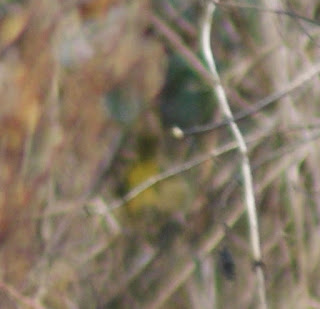 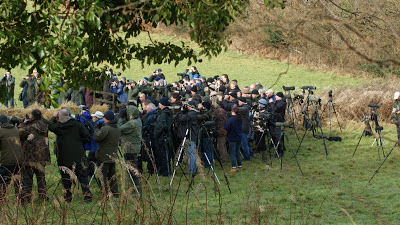 Some of the crowd at a twitch.

All you need to do is put your answer in the comments and to save any embarrassment for any wrong answers all i will do when i give the correct answer is publish the names of who got it right . So good luck . 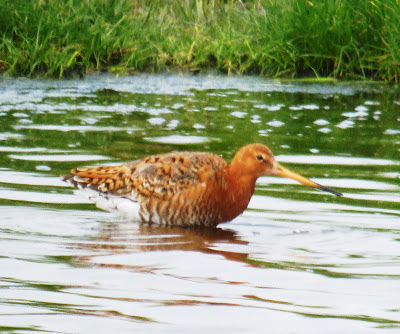 On Saturday morning i headed to Dover to try for the Great Reed Warbler  and after 45 minutes and a long chat with the finder of the warbler i accepted defeat as it had clearly moved on , i decided to head to Oare Marshes for the 1s Bonapartes Gull  , i arrived on site and with some helpful info i was soon on the bird which was on the mud flats opposite the sea hide , i watched this for a few minutes when it took to flight and landed on the other side of the creek and was quite distant  , whist i was watching this another birder picked out a single Little Tern which was a welcome year tick  . 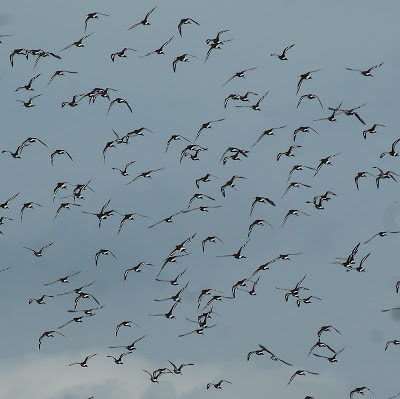 After a while i decided to check out the roosting Black Tailed Godwits and enjoyed some close views , a Marsh Harrier flew over the East Flood and spooked all the godwits which gave me some splendid views , i also added a Peregrine Falcon  from here flying behind the the hide on the flood which was another year tick  , plenty of Bearded Tits gave  some brief flight views and i heard at least 2 Cettis Warblers .