Dorset and Hampshire and Sunshine..... 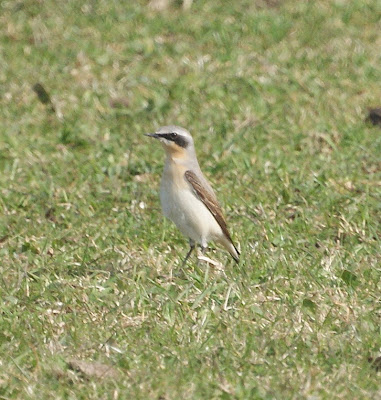 My first Wheatear of the year.

A trip to Wyke Regis in Dorset on Saturday  proved very successful , i was hoping to connect with several target birds and after getting some very helpful directions  , i was soon at the Humes Yellow Browed Warbler  location , on route to this bird i had several Wheatears in the nearby fields , really smart looking birds , anyhow back to the Humes , i joined another couple of birders who had already been staking out the site but with no luck , we spread out when i heard some one call out he had it , not really great views were had , all a bit to brief as the bird flew into dense cover however good enough to get a positive id ,   this was only my second ever record of this species , i saw the Reculver bird back in 1999. 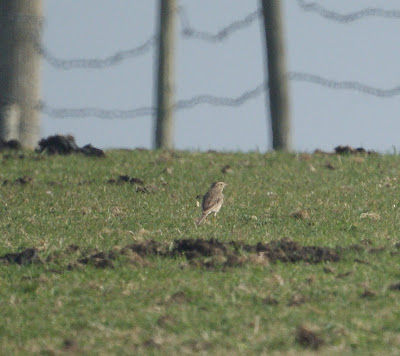 I spent quite a bit of time here but the Humes never re appeared , so i headed of to check out the surrounding fields for the over wintering Richards Pipit , i finally made my way back to near the camp area where it seems to be seen mostly and was greeted with the news it was there so without haste i set my scope up and was soon enjoying good views of this impressive Pipit , long yellowish / orange legs . very upright stance and heavy billed , i really liked the way it run quite fast along the ground  stooping forward before running . 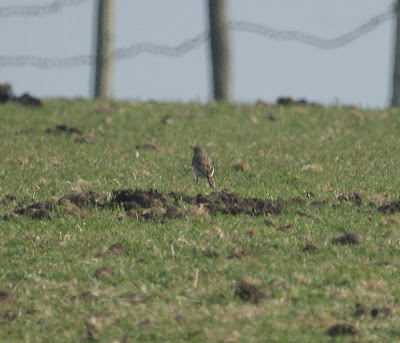 Another record shot of the Richards Pipit.

I had a good time here and other birds of note were a single Swallow  and 4 Sandwich Terns , there were several vocal Chiffchaffs plus a large raft of Red Breasted Mergansers in the Fleet .

I decided to head of to Radipole Lake and made my way to the North Hide , there were several Cettis s Warblers calling but as usual not showing themselves , i reached the hide and was hoping to connect with the 2 Glossy Ibis that had been residing there of late however they had just been flushed prior to me getting there by a couple of Marsh Harriers , well i decided to give it some time and enjoy the birds that were on offer , there was a really smart Kingfisher perched near to the sand martin sand bank plus a Cettis finally gave it self up s with a brief view from a nearby bramble bush , there were several Teal and a couple of fine looking Stonechats moving from bush to bush , i had been in the hide for nearly an hour and then my patience paid of when the two Glossy Ibis flew in and gave super views . 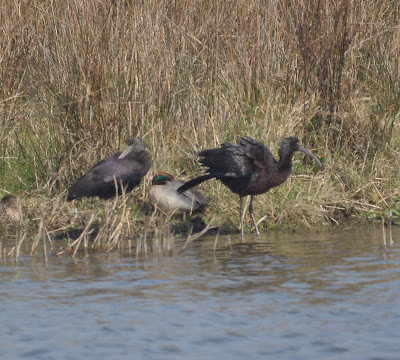 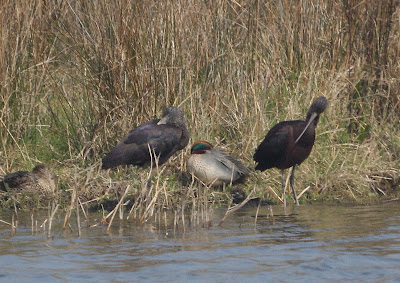 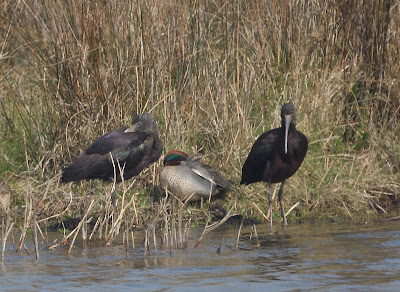 These were really great to see , one bird looked in stunning plumage which i am sure was an adult , the other bird possibly a first winter / juv  did not look so bright . I then moved onto Pennington Flash and added a good selection of waders including : Spotted Redshank 5 , Greenshank 1 , Ruff 1 and several Golden Plover , i also saw at least 3 summer plumage Water Pipits which were simply stunning to see , i also added 2 summer plumage Med Gulls . 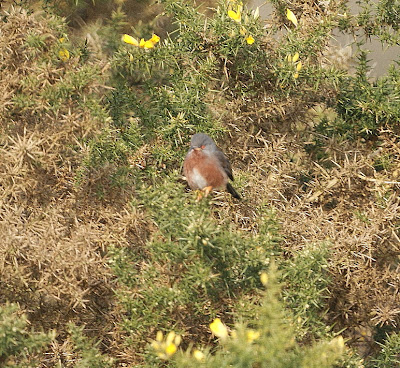 My final destination of the day was Beaulie road in the New Forest, i went to a area of gorse i knew from last year for Dartford Warbler , unfortunately the area has had some fire damage so the prospects were not looking good , i checked out the area which seemed to be more likely for them and after a few minutes i was not having any luck ,  i gave it abit more time and thankfully i eventually saw  a smart male and female , i never really got great views as they were keeping quite low down in the gorse . I decided to leave them in peace and went home very happy. 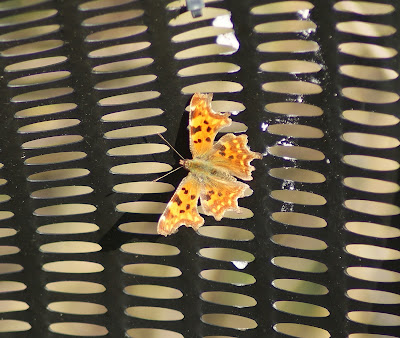 Of note i saw several butterflies today including this Comma  plus several Peacock , 1 Small Tortoiseshell  , 1 Small White and 1 Specaled Wood . 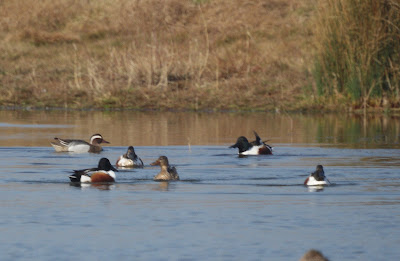 1 of 5 Garganey at Restharrow scrape.

I headed over to Sandwich Bay today to try and catch up with the Common Cranes that had been seen around Worth marshes and after a short scan across the fields i picked them out in the distance , they were to far for a photo however Martyn Wilson has some good photos on his blog of these smart birds , here is the link : http://birdingthestourvalley.blogspot.com/ . Both of these birds are adults and i was told they were displaying earlier in the morning , that would have been nice to see , checking my records these are the first Common Cranes i have seen in the Sandwich area so that was an added bonus . 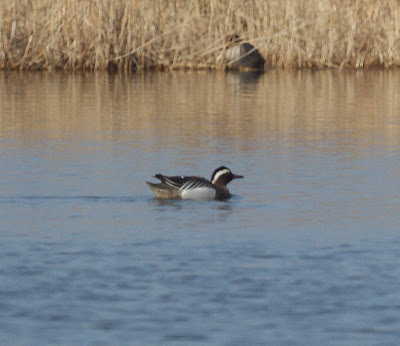 After enjoying my fill of the Cranes i called into the small hide at Restharrow scrape and was delighted to see 5 Garganey (3 drakes and 2 female) , this are really excellent birds to see and they were over the other side of the scrape whilst i was there but still close enough to get a couple of record shots    there was a mixed bag of ducks here , Wigeon , Teal , Mallard and Shoveler were well represented with lesser numbers of Tufted Duck and Gadwall , also seen here were a couple of Little Grebes which showed well for the camera . 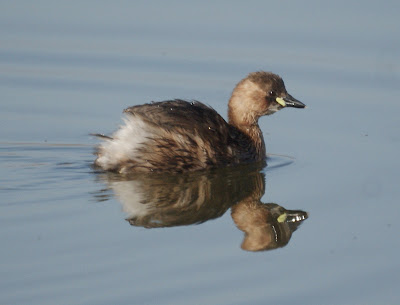 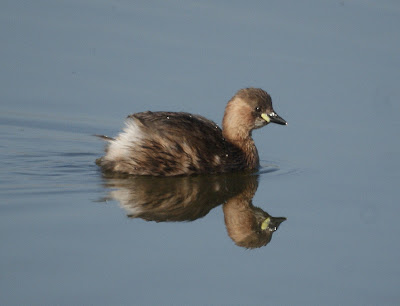 Did not add much more here although later a Caspian Gull and White Wagtail were seen here but i was long gone by then , still you cant get them all...... lol 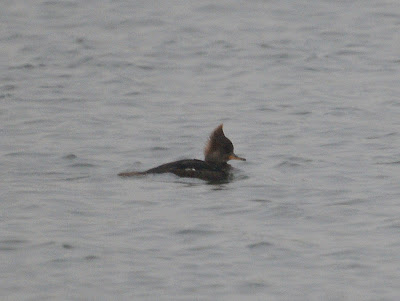 I  headed of to Whetsted gravel pits to have a look at the female Hooded Merganser that has recently been seen from there , i arrived on site and  soon picked out the Merganser on the other side of the pit , i made my way around to try and get better views but although i got closer the bird kept a safe distance from me , a really attractive bird with its typical Merganser hair style , yellow bill was seen as was small white patch on the flanks . 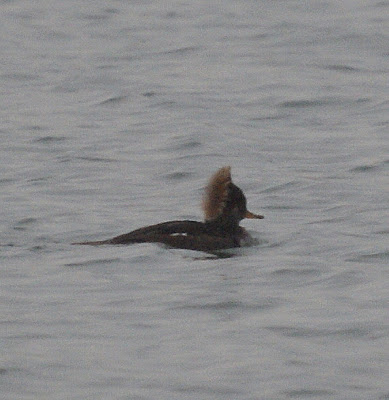 Well i guess the debate will go on about if it is a genuine vagrant or if its " plastic " ,  well in its favour  is the wings did not appear to show any abrasion , it was certainly acting wild in as such feeding well and always keeping a reasonable distance , add that to the fact that there are several American vagrants dotted around the country , ie : Common Yellowthroat , Northern Waterthrush , Wilsons Snipe and several Lesser Scaup and American Wigeon.

However can anyone be completely sure these birds have not escaped from someones collection or are a product of a feral population ???? wildfowl in particular are always suspect , I am not qualified to make such a decision on this bird and will leave it up to the BBRC to sort this one out . 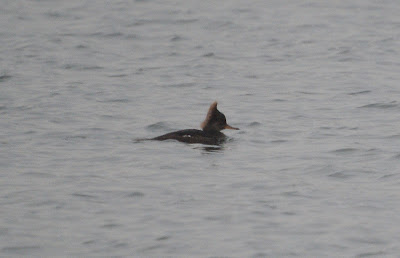 I also had distant views of a drake Smew on the other pit where there was also  a Chiffchaff moving through the small reed bed , there were Several Yellowhammers and Reed Buntings around plus i heard and saw Great Spotted Woodpecker and Green Woodpecker .