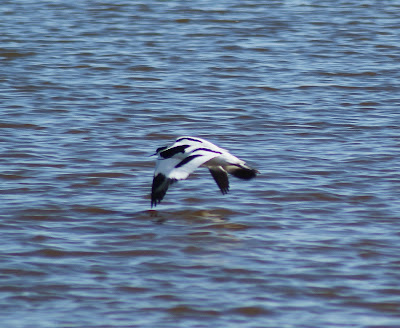 I spent a couple of hours at Oare Marshes this morning in the hope of connecting with some migrants , i saw a single Swallow on the overhead telegraph wires as i drove down the access road to the reserve , i parked up by the East flood and scanned across and instantly saw a Common Tern  amongst the many Black Headed Gulls , there was a few Avocets  on the flood with 2 birds quite close in . 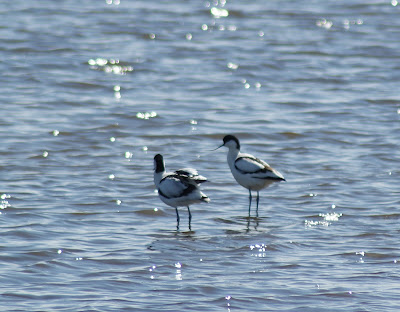 I then headed down to the car park by the slip way hearing several Sedge Warblers  as i went ,  as i was getting my gear ready by the car i met Barry and Sam who said hi and we then went off together along the sea wall towards the sea hide , there were several more Sedge Warblers along here and we managed to see at least 3 different birds  , i showed Barry and Sam the Common Seals which were out basking on the sand bank , there must have been about 20 of them , the most i have seen here , just as we passed the hide Sam picked out a Bearded Tit  flying over the reed bed which was good to see , and then we came across another Sedge Warbler . 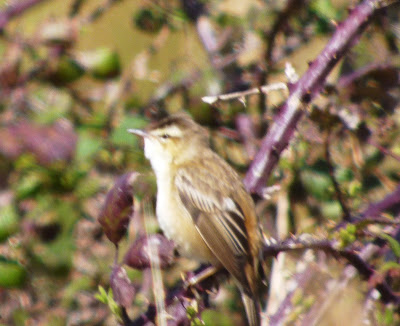 I noticed a Whimbrel land on Faversham creek which was a welcome year tick , there were plenty of Avocets and Redshank along the Creek plus good numbers of Shoveler , Tufted Duck and Mallard out on the East flood , there was a scattering of Greylag Geese with a couple of Canada Geese amongst them , i parted ways with Barry and Sam and headed back towards the slip way to try and locate the Garganey which had been seen just west of there a couple of days ago whilst Barry and Sam continued around the reserve  , well i did not see the Garganey but i did see another Whimbrel plus two Common Snipe  were having a fly around , i heard a Med Gull but could not locate it , i then decided to head back to my car and bumped into Barry and Sam again , very good to meet you today , a really pleasant morning in sunshine and 3 year ticks to add to my total. 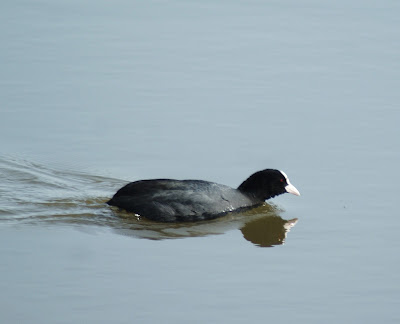 I had a couple of spare hours this morning and decided to head over to Stodmarsh and try and see the Common Crane and to cut a long story short i missed it by about 10 minutes , luckily i have seen one at Stodmarsh before but that was quite some time ago and it would have been great to have connected with this one , never mind that's birding . 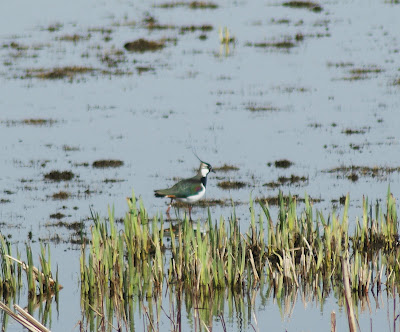 I met Steve Ashton and Mike Gould in the Marsh hide and they said other than the Crane it was fairly quite , they decided to head of and try and relocate the Penduline Tit and i stayed just in case the Crane decided to come back . 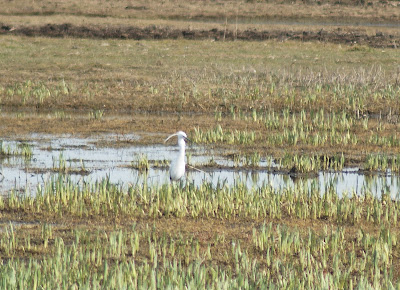 There were plenty of Common Snipe  and a scattering of Redshank amongst them , i saw 2 Sparrowhawks  and a single Marsh Harrier  , a Cettis Warbler was singing nearby but refused to show its self . 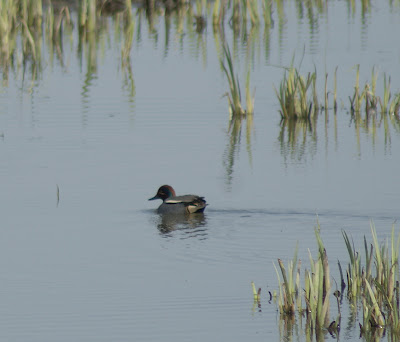 I saw 3 Water Pipits feeding in the distance and another birder in the hide picked one out a little closer in summer plumage , these are really smart birds and worth the walk out to the Marsh hide on their own , sadly it was to far for a photo , after about an hour i decided to head back and heard up to 3 Chiffchaff and a single Green Woodpecker on my return journey plus i am fairly certain i saw a Small Tortiseshell on the path but it flew before i could get a good view of it  . 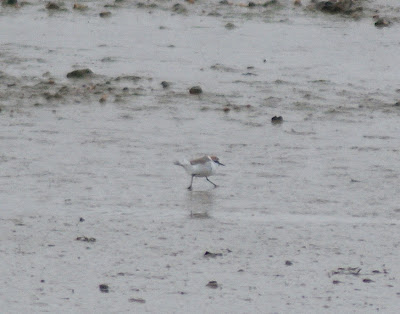 My first port of call was Rye nature reserve , i walked up to the cottage and before i had even set my scope up the quite stunning male Kentish Plover was in the nearby pool that it has been favouring , this bird had a lovely rufous crown and nape ,  a welcome year tick  . 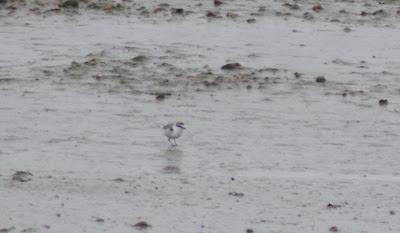 Another record shot of the Kentish Plover.

There were plenty of Ringed Plover , Dunlin and Redshank plus approx: 10 Avocets were dotted around here and there . 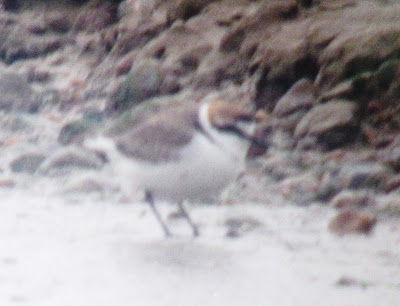 There was also a distant female Merlin perched on the ground . Plus several Sandwich Terns  flying along the gravel bank . 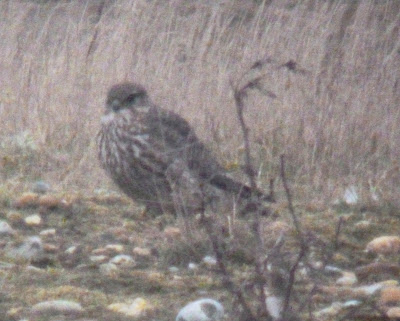 The Merlin spooked the waders and they all flew off after about half an hour of me watching them , 2 adult summer Med Gulls flew over the chalets and i then decided to head of to Dungeness rspb reserve , i made had a quick stop at the entrance of the reserve and saw a handful of Tree Sparows on the feeders . 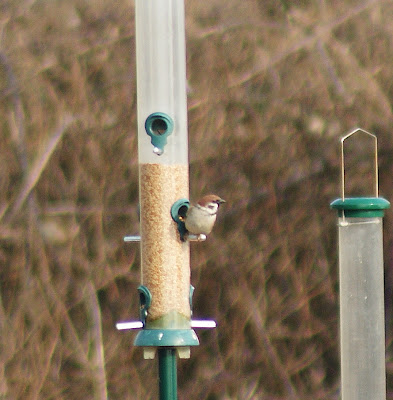 One of many Tree Sparrows on the feeders.

I parked up and walked around to the Makepeice hide where i saw   2 Redhead Smew which were good to see , i decided to head to Hookers pit , it was fairly quite looking from the hide so i then decided to look from Hookers ramp , this was a good decision as there were several Golden Plovers and also 2 Ruff were mixed in with them , after scanning the geese i saw the 5 Tundra Bean Geese  which was an excellent year tick  , there were at least 3 Marsh Harriers in the area , i also saw  a Bittern flying behind the ramp , wow the year ticks just keep on coming !!!!

I then headed back to the car and down to the fishing boats looking for the Glaucous Gull which is very hit or miss and sadly today i missed it  , i did see a Sparrowhawk fly over the gull roost and land on some fishing nets , i headed off to the old lighthouse area and was soon happy to see 3 Black Redstarts  2 males and a female . 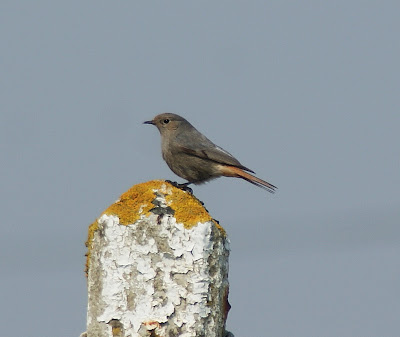 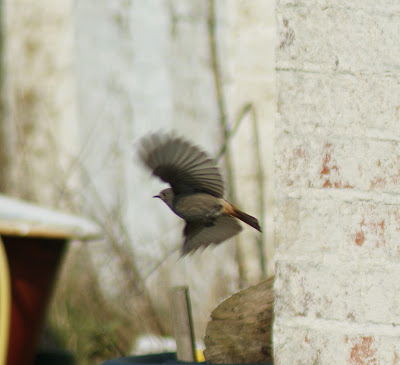 I had a look over the Arc pit and saw  5 Black Tailed Godwits and just when i thought that would be the last bird of the day a Great White Egret  was on Burrows Pit .