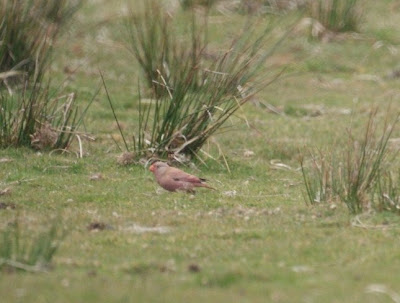 My first visit back after 21 years saw me heading to Lundy in  the hope of seeing the superb Trumpeter Finch which was on its eighth day on Lundy Island , leaving Bideford at approx 8.30 am i arrived at Lunday at 10.30 am , now i was 21 years younger the last time i came here and the walk / climb up to the top of the island was very hard going even then , now with lets say just a little bit more weight then i had back then the walk nearly finished me off.....lol  but i have to say it was well worth it , this pink beauty gave excellent views , quite stunning in appearance  the photos don't really do it any justice. 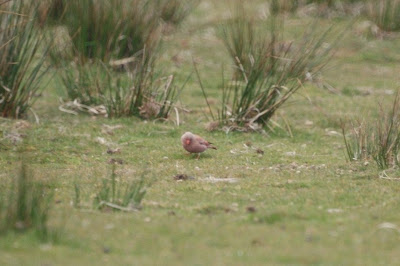 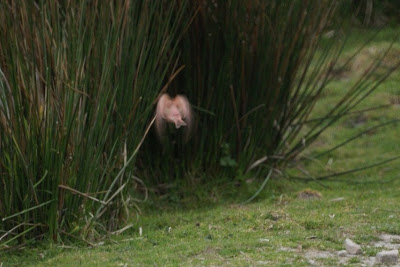 Here it is just taking off .

I spent quite abit of time looking at this stunning bird and although it was quite flighty it did show really well at times feeding on the ground or sitting on the stone wall , the weather was closing in ,  so i decided on a walk back to the shop but before i returned i managed some photos of a couple of  a Wheatears which was rather smart. 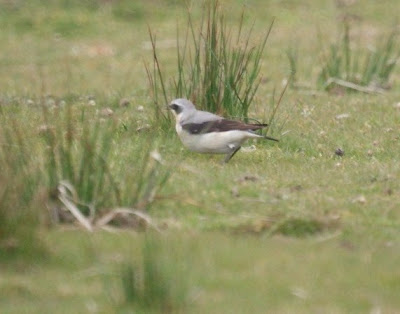 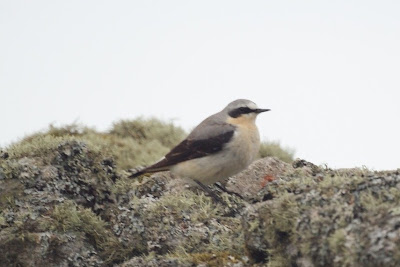 Second bird on the wall.

I decided to go  to the pub to dry off and celebrate the Trumpeter Finch which was a new species  . I had time to do some more birding on my way back to the quay and first i saw 1 Spotted Flycatcher then  another 4 birds near by , a much welcome year tick indeed and really smart birds to see , they were doing there normal flycatcher thing , flying out to catch insects and then returning to there favoured perch.

There were plenty of Swallows and House Martins around plus a unexpected Lesser Redpoll  put in a brief appearance , a few Skylarks and Meadow Pipits were seen as was at least 5 Rock Pipits .

The return journey on M S Oldenburg was rather an up and downer affair the swell in the Bristol Channel was quite immense but the birding was spectacular with hundreds of Manx Shearwaters giving stunning views a really under estimated count of 500 birds was made but there was most certainly alot more . Close views of Gannets , Kittiwakes and Fulmers were had .
Of interest i did see a Grey Seal whilst waiting at the quay , plus the endemic Lundy Cabbage was well represented around the cliff face . 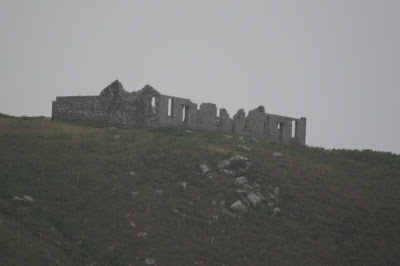 An Old Ruin on Lundy 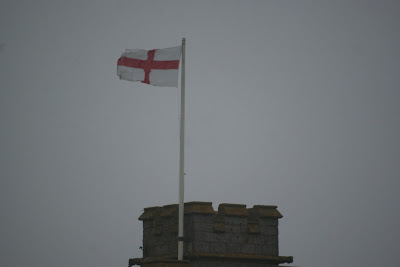 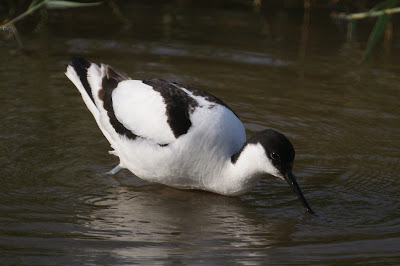 Well as the title indicates the fantastic run of connecting with major target birds came to an end yesterday evening  when i dipped the Great Snipe at Cley in Norfolk , i spent from 4pm til 9.15 pm in the Avocet hide which was rather full , you could feel the anticipation and excitement grow amongst the crowd of birders gathered to see this delightful bird but sadly the very anticipated viewing never happened , the weather conditions didn't really help as it was quite windy , it was apparently heard  but that might of been the tape recording someone played near the end of the evening  , still as disappointing as the dip was i had a truly good days birding. 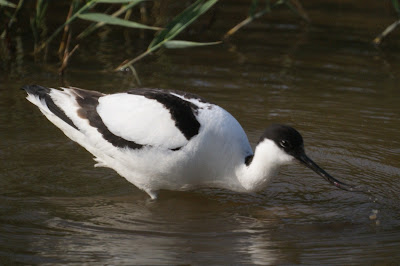 Close view of an Avocet from the Avocet hide.

I started of at Titchwell and soon connected with the superb Wood Warbler that was by the picnic area , it called off and on and gave some superb views , i really enjoyed this bird , there were several local Robins with young nearby as well as Chaffinch feeding young as well , a pair of  Great Tits were constantly in and out of a nearby nest box and you could hear the young birds inside  !

I did not spend long here as i wanted to get to Cley , i decided it best to check out the wader pools along Beach road before i stake out at the Avocet hide , wow what a selection of waders i saw , first and foremost was a superb Lesser Yellowlegs which is the second one i have seen this year or maybe its the same bird i saw in Somersett a few weeks ago ????? , in the same pool there were at least 4 Wood Sandpipers  and then i saw a  Temmincks Stint which was a new bird for the years . 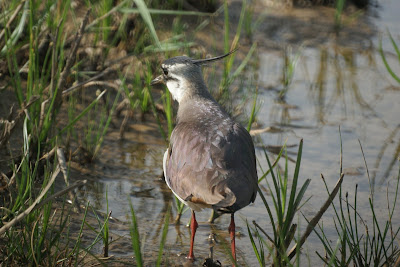 From here i headed of to the visitor center and got my permit then made my way to the hide , and as i said earlier i spent 5 hours here and although i never saw my target bird i still had some quality birds , first up was a fantastic close view of an Avocet , this was a very aggressive bird chasing off every bird that came to close to its territory and young chick  , maybe the Great Snipe had got to close at some point ??

I also had a very confiding Lapwing which performed well for the camera , there were a pair of Little Ringed Plovers zipping around and the selection of waders kept growing with , Greenshank , Whimbrel and Common Sandpiper  all added along with 2 Temmincks Stints putting in a brief but welcome appearance .
A juv. Spoonbill did a fly around and landed in a pool not to far from camera range . 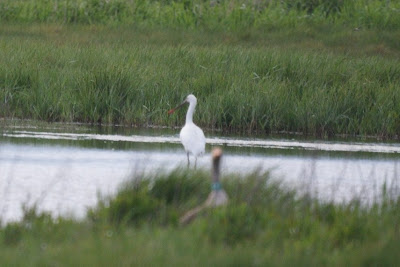 The Greylag Goose in the foreground had a dutch ring around its neck , apparently thats how they ring them , i   have to confess i am not to sure i like the way these birds are ringed , its not that they are being harmed or look bothered by them i just think it takes away the charm and looks of the bird .

Whilst waiting for the non appearance of the Great Snipe someone picked out the earlier seen Barn Owl and Short Eared Owl flying together which was great to see . At least 3 Common Snipes put in an appearance plus there were very good numbers of Sand Martins flying here there and everywhere and they were joined by a good number of Swifts as the evening drew to a close , i had a good selection of mammals today including a Weasel   plus 2 Brown Hares .

Not huge numbers of birds moving although the main target bird Pomarine Skua was seen very well with most birds quite close in and their " spoons " were easily seen .

A quick visit to the Rspb reserve was less productive with very little seen , highlights being a showy Cettis warbler and a Booming Bittern was good to hear , also several Common Whitesthroats gave themselves up to the camera . 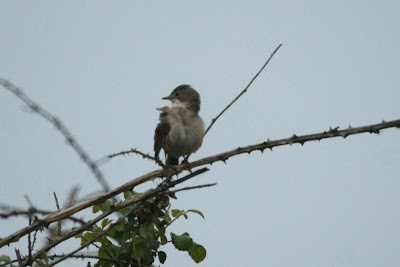 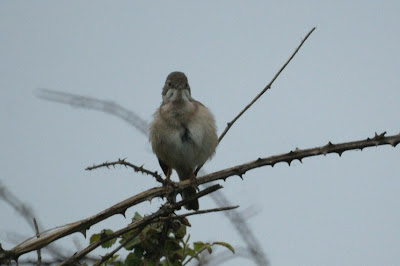 I also had a look over the ARC pits and  picked out a Black Tern being harassed by a Lapwing , not else of note was seen here , although a smart Little Egret and a Grey plover was nice to see .  I also saw  4 Common Swifts flying overhead which was a welcome year tick .

From Pratincoles to Cranes ....Weekend Birding at its Best 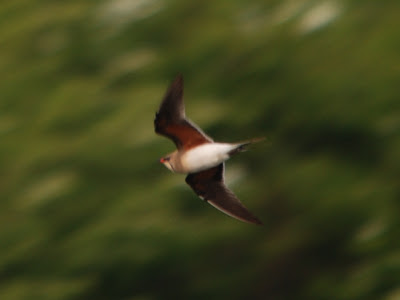 An early start Saturday morning saw me  heading off to Lincolnshire and Norfolk for the weekend , i started of at Rosper road pools for the Collared Pratincole , i arrived at 2pm and had missed it by 25 minutes , but was informed that it often goes and returns later in the evening ,  i decided to put the time in as i had come so far , i was entertained by several House Martins and i also heard Lesser Whitethroat which was new for the year , i had been waiting for approx 3 and half hours and was deciding how much longer i should give it when another birder announced he had got it from the front of my car .

It was quite brilliant and showed down to ten feet at times , cream throat patch and reddish underwings were the first things to hit you , short forked tail white rump and trailing edge on secondaries were easily seen , black edging around the throat patch and red base to the bill were harder to see , it was constantly flying around picking insects of the pools , whilst watching this  bird a Grasshopper Warbler started reeling in the distant bushes , i have seen four Collared Pratincoles now but this was by far the best views i have had of one .

From here i had just enough time to head of to Tetny Lock for the migrating Dotterels that had been there for the last couple of days , on arrival i picked out first 1 then 2 Yellow Wagtails which were welcome year ticks  , i reached the ploughed field and it was not long before i managed to find all 7 Dotterel 4 females in stunning plumage and 3 males , they were to distant for photos but gave great scope views , with the excitement of seeing these superb birds i headed of to a B&B near Brandon and on the way i  connected with a superb Barn Owl . 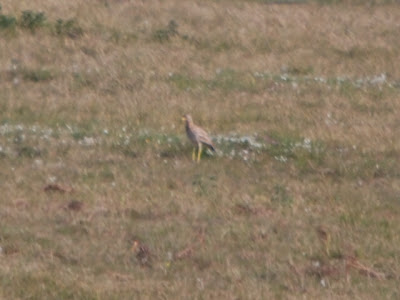 I arrived at the first site of the day Weeting Heath just after 8.30 am and it was not long after a short scan over the road i picked up my first Stone Curlew , i also saw it in flight which was a nice bonus , i added a second bird from one of the hides and also saw a Stoat running across the  reserve , smart . i then headed of  to Lakenheath , i have not been here for a number of years and have to say the RSPB have done a wonderful job to the reserve , i was probably a couple of weeks to early for Golden Orioles at this site but never the less i had some quality birds , 2 adult Common Cranes gave amazing flights views on a couple of occasions and were also heard calling . 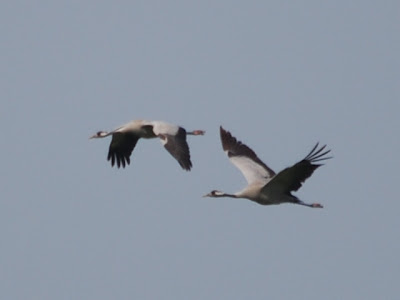 Other birds of note here were 3 Hobby , lots of Sedge Warblers and Common Whitethroats , 4 Common Terns and at least 8 Marsh Harriers giving amazing views whilst displaying plus one male bird carrying nesting material was good to see.

My next planned destination was Halesworth and my target bird here was a superb adult Woodchat Shrike and after a short wait i was  enjoying superb views of this bird as it perched on some railway sleepers and every so often taking flight only to return to its perch. 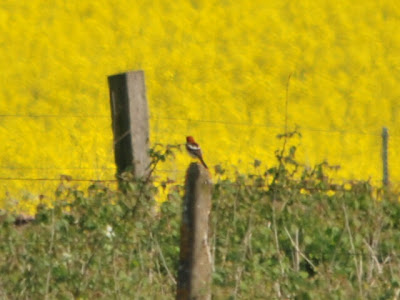 Could this weekend get any better ? well it could and it did news of an adult summer plumaged White Winged Black Tern at Minsmere which was on my way home could not be resisted , within 25 minutes i was on the site 10 minutes later i was onto the bird , quite simply brilliant to see , i have seen lots abroad but never a full summer bird in this country , wow is all i can say... 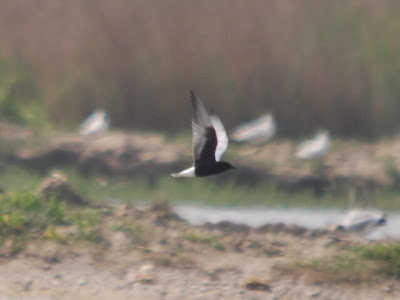 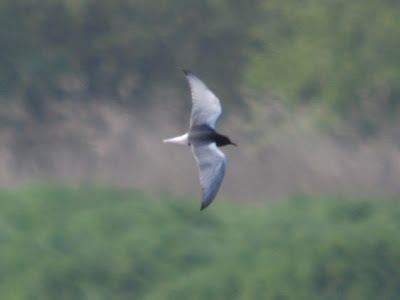 I was treated to many flight views of this bird and although it more or less kept the same distance away it was unmistakable  , i also had superb views of  Bar Tailed Godwits in summer plumage . 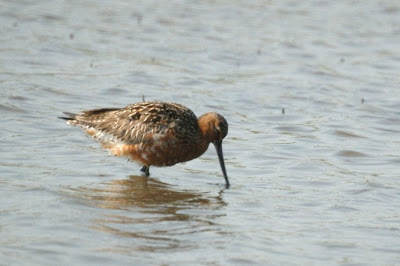 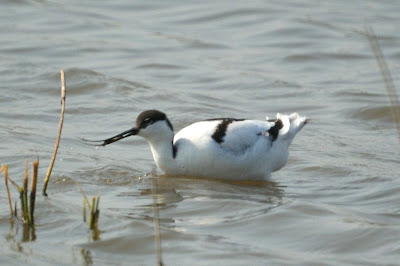 The day was almost up when i was greeted to the news of 4 Black Winged Stilts in Essex , surely not was my first reaction but when the news was confirmed i could not believe my luck , i made a short diversion on the way home to Wat Tyler Country Park and believe it not the hide was harder to find then the birds !! 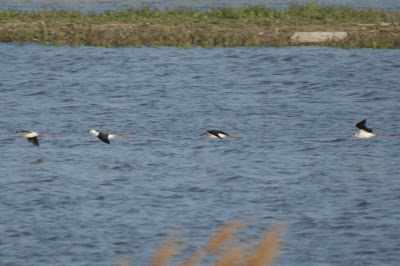 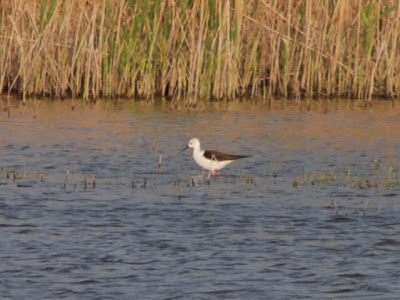 One of the Four 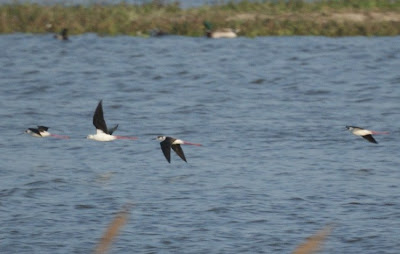 And in flight again.

This was  the most i have seen together in the UK , i just love the long pink / red legs , they were quite flighty but did spend some time feeding along the small islands eventually they all took to flight and dropped out of view in another part of the reserve .