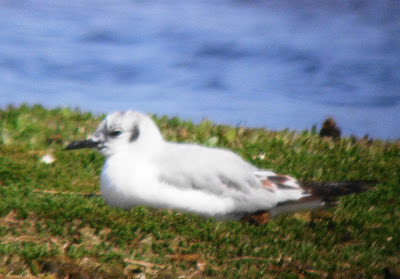 I paid 2 visits to Oare Marshes today , i called in at approx 9.30am and  a quick scan over the east flood drew a blank , i then ventured along the sea wall and down Faversham creek and finally located the Bonapartes Gull on the flood near the Black Tailed Godwit roost at about 10am , i instantly saw the all black bill and the smaller size was evident , i no sooner set my scope up when it took off and flew down Faversham creek and out of sight . I decided to head back and try again later when the tide was in so i could hopefully get some photos at roost . 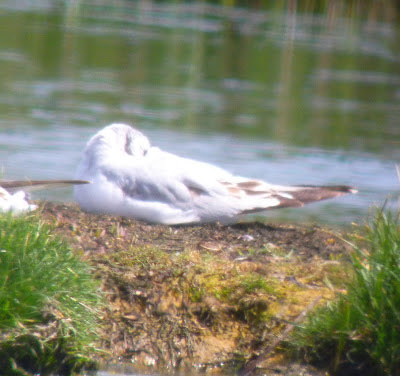 You can see the black patch by the ear coverts.

I added several Common Swifts  flying low over the east flood on my return journey plus there were a couple of Common Terns  flying up and down the creek . On my second visit at high tide at approx 12.45pm i parked up by the pull in on the access road and straight away was on the Bonapartes Gull roosting on one of the small islands along side several Black Headed Gulls , it gave a really good size comparison , a couple of times it was spooked and flew around and you could clearly see the white underside of the primaries , this is a really smart looking gull , it stood up at one point and wing streched and you could see the pink coloured legs . 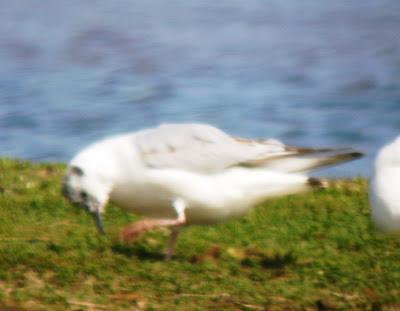 I really enjoyed this bird and watched it for about an hour , other birds seen were a close Yellow Wagtail , up to 3 Hobby although another birder had see about 7 birds , there were lots of Little Egrets  around the reserve plus a distant Cuckoo could be heard . 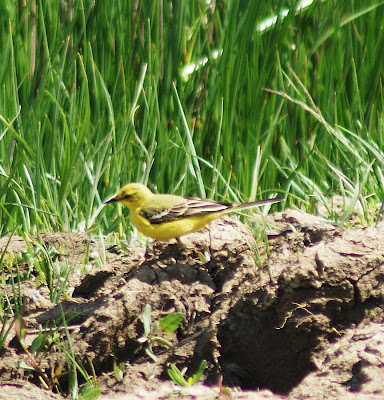 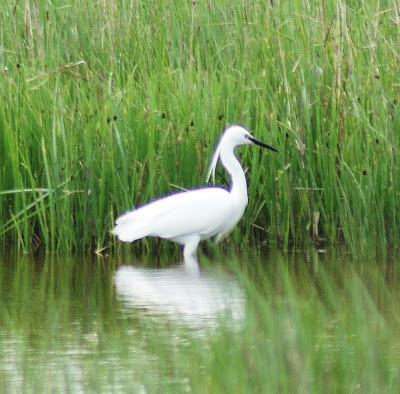 Posted by Robs Birding at 08:32 No comments:

Amazing news of a  Whites Thrush caught on camera in Scotland during a Wild Cat survey in January of this year is incredible , just goes to show anything could be hiding away somewhere , here's the link to it : http://www.bbc.co.uk/news/uk-scotland-highlands-islands-22447693

Of note i saw 2 Swifts when i was working in Chichester on Wednesday , first ones for me this year .
Posted by Robs Birding at 04:30 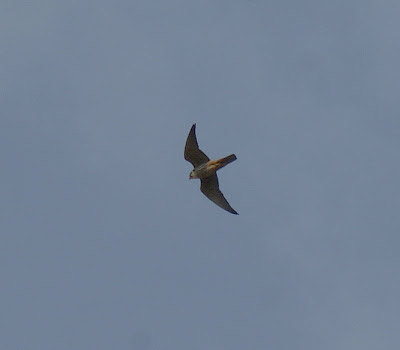 Taking advantage of the Bank Holiday i paid a long overdue visit to Grove Ferry this morning in the hope of seeing a few year ticks , as i paid my car park fee i could hear a Nightingale  in the distance and as i walked along the entrance track i could hear 2 Turtle Doves  " purring " away in the paddocks but they refused to show themselves , i bumped into Phil B along the path and as we headed off to the ramp we met Martyn Wilson on the way and after a brief chat Phil and i headed off to the ramp , it was fairly quite from here , the water level was quite high with hardly any exposed mud to attract waders , we did hear a distant Cuckoo which was my first of the year , i said my goodbyes to Phil and headed off to the Feast hide and had some excellent views of Common Terns . 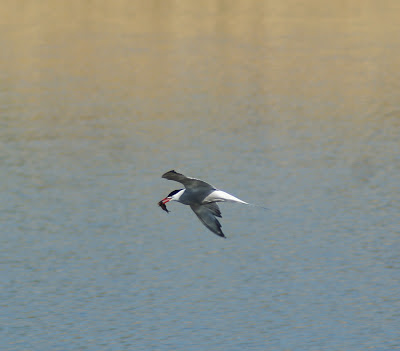 One of three Common Terns .

I also saw 2 Hobby  and a single female Marsh Harrier  overhead , i decided to head around to Harrisons Hide in the hope of relocating yesterdays Wood Sandpiper , there were plenty of Warblers in full volume plus the odd " pinging " of hidden Bearded Tits , as i approached Harrisons i could hear a Lesser Whitethroat but yet again it never showed itself , i met another birder who informed me there was a male Garganey on a pool west of the hide and i headed off there and within minutes i had some good scope views of this smart Duck , i took a digi scoped photo and as you can imagine with the heat haze and my dodgy camera skills the result was not that good. 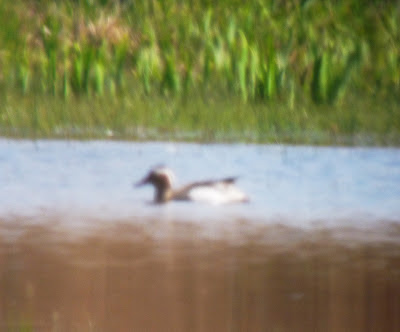 As i was checking out the Garganey,  2 Common Buzzards  drifted overhead and then i noticed a small Egret had appeared at the end of a nearby dyke , i got my scope onto it and was delighted to have relocated the Cattle Egret that had been seen on and off over the last week or so , here are some photos i took . 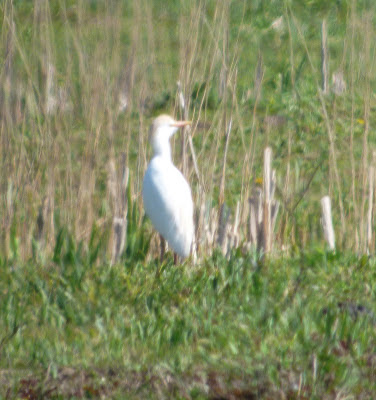 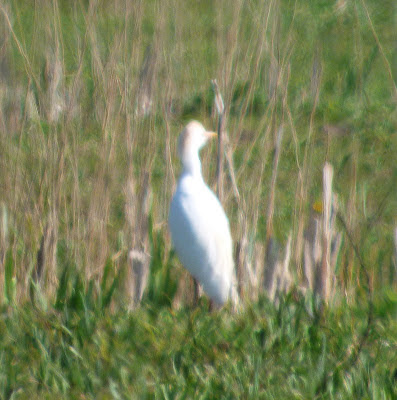 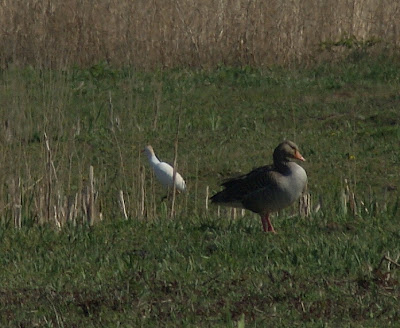 The Cattle Egret  must of been hidden down by the dyke and was being harassed by the Greylag Geese which had some fluff balls ( goslings ) with them . I also saw approx : 15 Hobby from here looking over towards Stodmarsh , i then headed back to my car very pleased after a very good birding session with a few year ticks under my belt.

Posted by Robs Birding at 12:39 No comments: 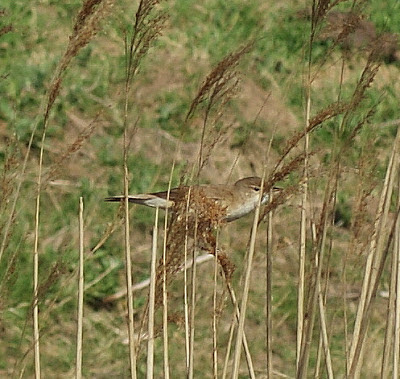 I spent a very pleasant birding session at Oare Marshes today ,  l started of  listening to a Nightingale by the entrance track to the west hide , although i never saw it , there were several very vocal Common Whitethroats  here also , i then walked back past the east hide and onto the new accusations area ,  there was 2 or 3 Reed Warblers setting up territory along here and 1 bird showed well at times and was a year tick for me , there was not alot of activity on the new accusation other than several Lapwings and 2 Oystercatchers , although i did add another year tick in the shape of a distant Yellow Wagtail which was perched on top of a distant fence post . 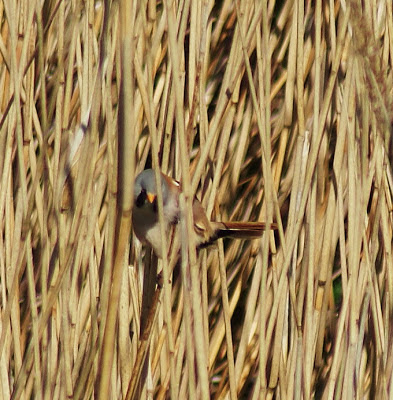 I then ventured around the east flood along Faversham creek towards the sea hide , there was a single Wheatear in the field near the sluice and at least 5 Bearded Tits  were " pinging " away all along the reed bed which runs along side the path , and i even managed to get one or two photos . 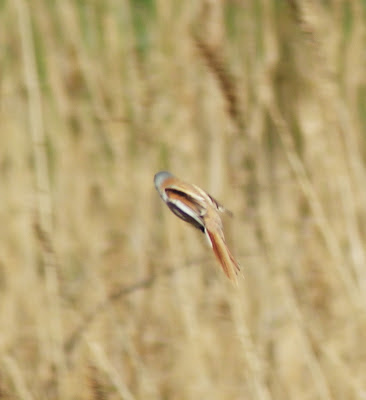 The reserve was alive with bird song , mainly Sedge and Reed Warblers but i did hear 3 Cettis Warblers  as well as several Reed Buntings , there were 2 Sandwich Terns  flying around the mouth of Faversham creek , as i walked back along the sea wall i saw 3 Common Buzzards over Mocketts Farm and a single Whimbrel in the flooded area west of the slip way . 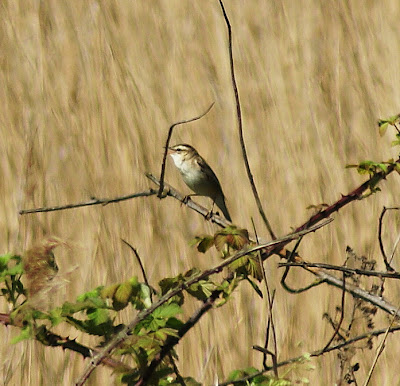 One of many Sedge Warblers .

On my out of the reserve i bumped into Murray Wright and whilst we were chatting a Sparrowhawk circled around us and then drifted of west , i then had one final listen of the Nightingale and briefly heard the " rattling " call of a Lesser Whitethroat  , so all in all a pleasant summers day birding at Oare Grey Heron on pool west of the access road.