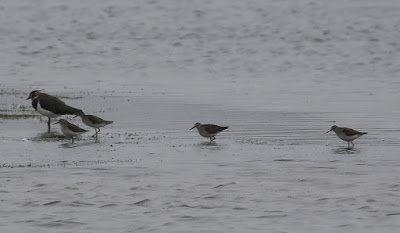 A trip to Dungeness on Saturday proved a very good choice as the overnight bad weather had grounded good numbers of waders on the reserve, i missed the early birds but through the day i managed to catch up with most of them.

One of the main highlights for me was Wood Sandpiper which are one of my favourite waders and i managed to see at least 9 birds together on the Arc pit from the Hanson hide .

The most i could get in one photo was 8 birds , here are a few more photos. 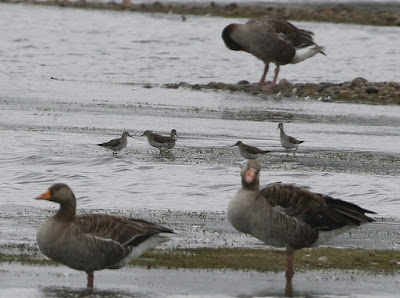 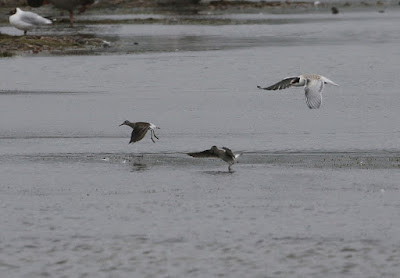 Being spooked by a Tern. 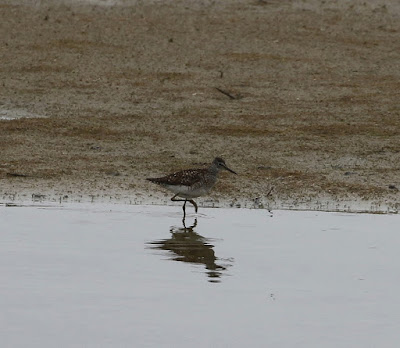 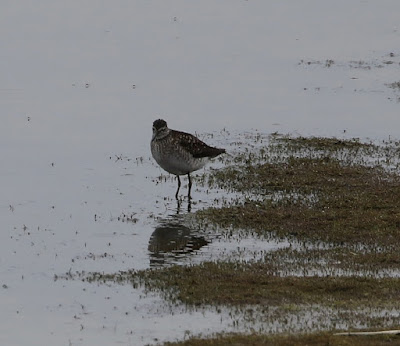 Later in the day 2 Temminck's Stints were located in front of the Firth Hide. 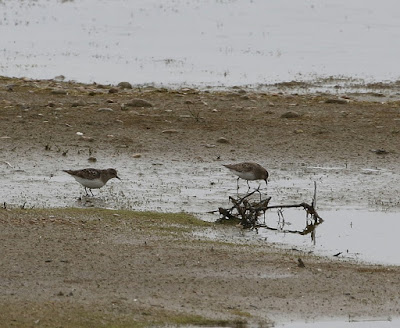 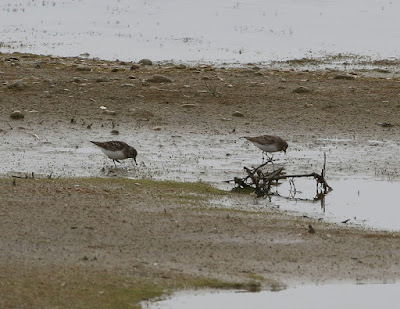 I really enjoyed watching these smart birds as they fed busily in front of the hide, Little ringed Plover & Common Sandpiper were keeping these birds company. 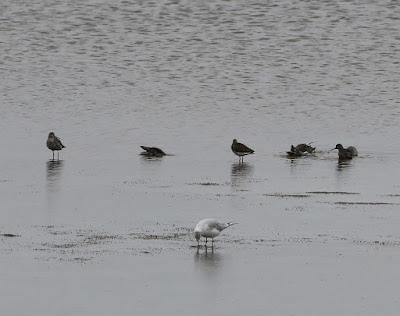 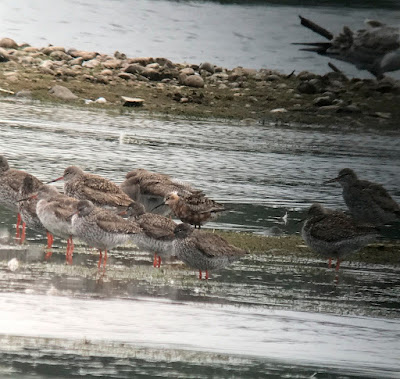 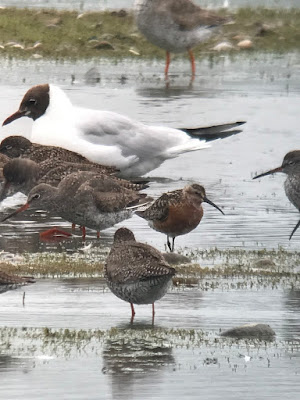 A real wader spectacle with my personal total of 17 different wader species out of 22 reported , add that to the several Great white Egrets and hundreds of Sand & House Martins , a single Hobby plus several Marsh Harriers i would say Dungeness was a great place to be on Saturday. 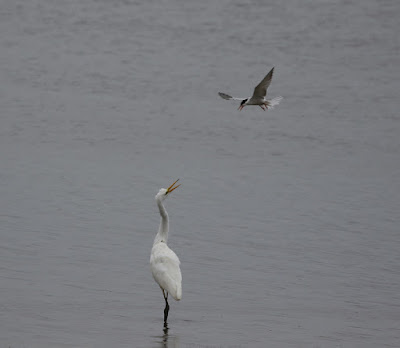 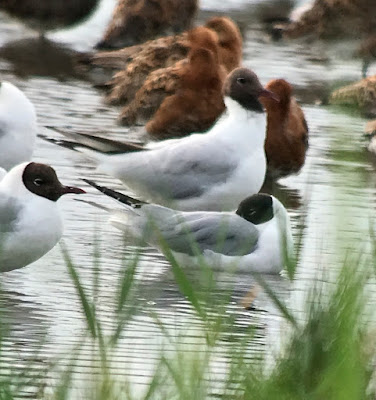 I received a text message from MW on Wednesday 10th July at approx 5.35am informing me the Bonaparte's Gull was back at Oare marshes and roosting on the East flood !!!1

About an hour or so later i joined MW & RR by the East flood looking from the road and sure enough now back for it's 7th year the Adult Bonaparte's Gull was having a well earned kip near the pull-in.

On high tide the East flood is the best place to see the Bonaparte's Gull , low tide it favours the mud near the slip way and can be seen having a feast on all the lug worm. 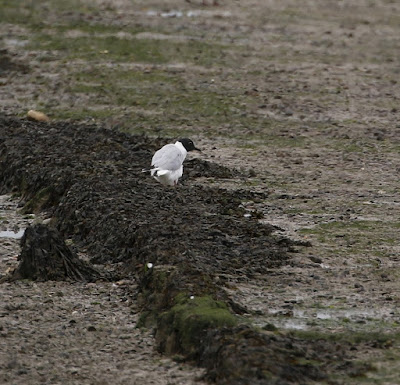 Having a preen near slip way. 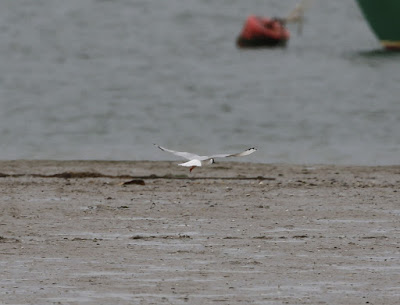 You can just about see the white on the under-wing.

The water levels are still quite high on the East flood however there is a bit of mud and shallow water in the South east corner , MW suggested it might be worth a look , so we headed off in that direction. 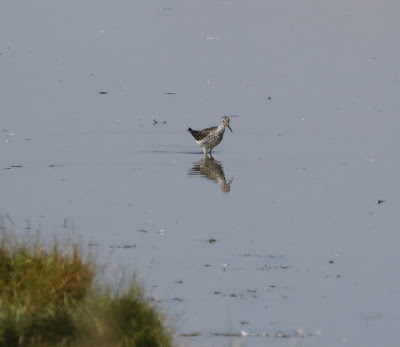 We were all scanning through the numerous Black tailed Godwits & Redshanks when MW & myself both got on a wader which made us both think ' What's that ??'

After discussing the possibility's MW suggested Lesser Yellowlegs and after making double sure of all the features, we all agreed that indeed that is what it is !!!!

MW sent out more txt messages and i tweeted the news out and RR just enjoyed the bird !!! 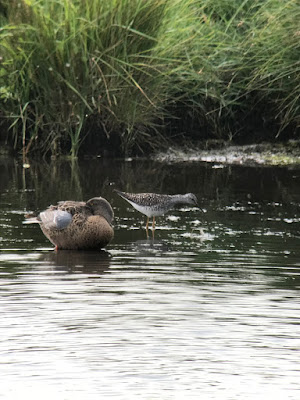 This was a new bird for all our Oare marsh bird lists , there has been 2 previous records however both were one day only birds.

The Lesser Yellowlegs flew out into Faversham creek at one point with Redshank but thankfully soon returned. 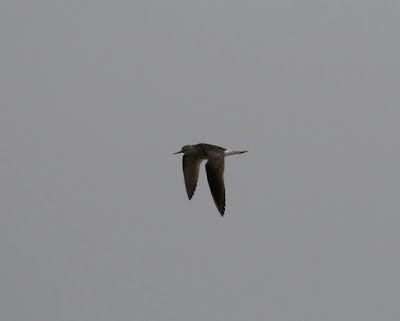 Flying back into East flood. 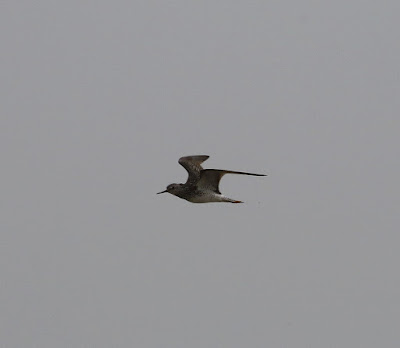 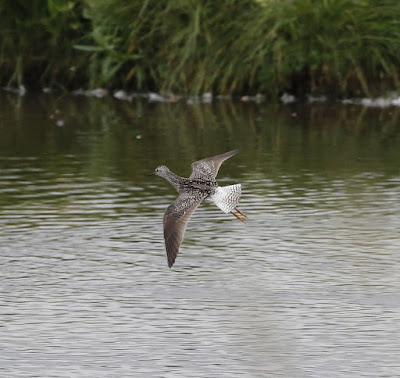 The Lesser Yellowlegs is still present as i write (18-7-2019) and still favours the South east corner of the East flood, i have seen it alongside Spotted Redshank & Wood Sandpiper , it has also roosted on the island near the road on occasion. 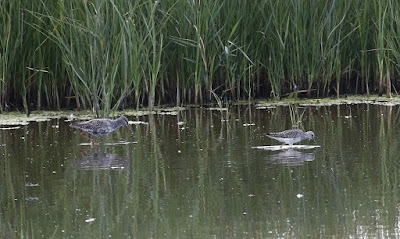 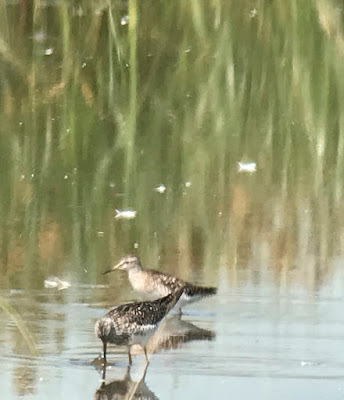 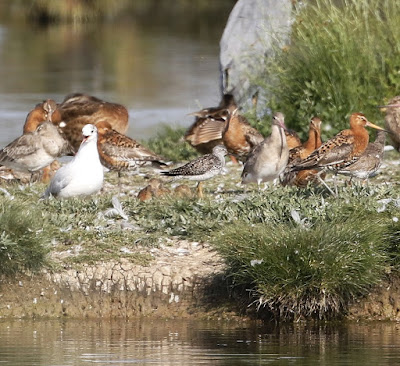 Hopefully the water levels will drop some more to expose some muddy fringes and who knows what else might turn up !!!!!