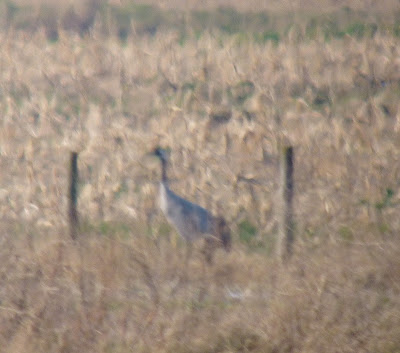 After hearing about the influx of Common Cranes near the raptor viewing watch point yesterday i could not resist the chance to see them this morning , i arrived on site at approx 10.15 am and the first birds i saw were two Green Sandpipers  flying around the nearby reed bed then another birder picked out a distant female Merlin on a fence post , blimey i had only just set up my scope and had 2 year ticks in the bag , however there had been no news on the pager before i got there and as everyone was looking at other birds i thought perhaps they have moved on and then another birder asked  if they were still around and we were informed yes they are in the distant field behind us and sure enough i soon picked them out , 4 adults and 3 1st winters all together . 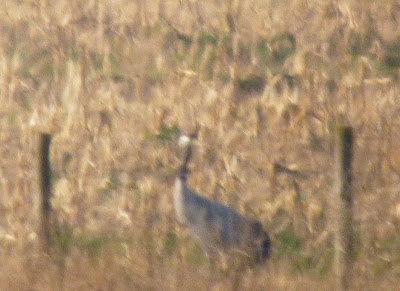 Another record shot of one of  the adult Common Cranes.

Really pleased to see these , shame they were a bit distant and sorry about the quality of the digi scoped photos , whilst watching the Cranes a distant ringtail Hen Harrier drifted by in the back ground , it was bitterly cold standing on top of the viewing ramp so i decided to go looking for some geese , i found a large number of Grey Geese which were mostly Greylags  however after a close scan through i picked out 2 Pink Footed Geese  , now these are fairly scarce in Kent compared to the thousands they get in Norfolk , so i was pleased to see these , smaller than Greylags with much darker heads and neck with only a small amount of pink on the bill also with pink legs and feet . 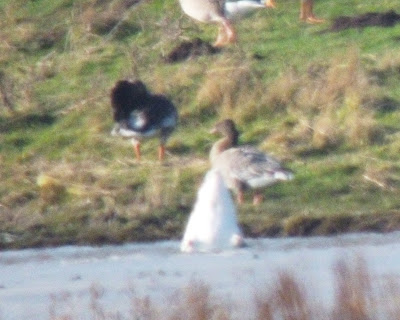 Pink Footed Goose with an upturned Bewicks Swan in front.

There were 2 Bewicks Swans near by plus 2 White Fronted Geese showed very briefly before disappearing around the bend and out of sight ,  i always set a target of reaching 100 species in January and after this mornings birding session i am on 103 so very pleased with some top quality birds seen and all in Kent so far . 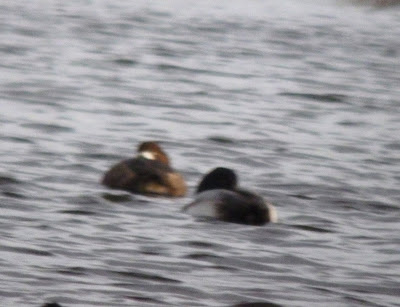 I had a very enjoyable couple of hours at Oare Marshes this morning , i parked up in the viewing layby and then headed for the East flood hide where i had excellent scope views of my first of 3 patch ticks in the form of male and female Scaup , these have been around the reserve for approx a week and this was my first chance of trying to see them .
From here i headed back to my car and drove down to the sea wall and then walked along the sea wall in a biting wind and met up with Murray Wright near the sea hide and spent a very productive session birding with him , he picked out a distant Red Throated Diver on the Swale and this was my 2nd patch tick of the morning , there were lots of waders around including , Grey Plover , Dunlin , Curlew , Oystercatcher and 100+ Avocets , whilst checking through the waders Murray pointed out a pair of Red Breasted Mergansers flying up the Swale , after a while i decided to head on with my circuit of the reserve and i had only walked half a dozen steps when Murray called be back as he had just found  a Slavonian Grebe  fairly close in ,  this was my 3rd patch tick of the day. 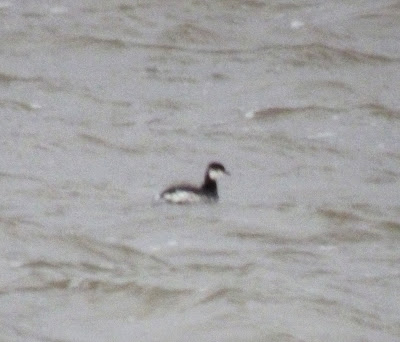 I enjoyed this bird for some time  before i said my goodbyes and carried on with my walk , i added a smart male Stonechat and i got better views of the male Scaup from this side of the reserve . 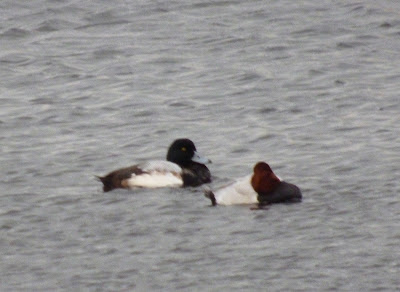 Male Scaup with a Pochard.

I didn't really add much more to my trip list here although 2 Bearded Tits along the roadside was good to see plus on my way out a Great Spotted Woodpecker  flew on to a telegraph pole by the cottages giving yet another year tick . Just like to Thank Murray for his company and picking out the Slavonian Grebe .

There's Something Foxy Going On

Dungeness is one of my favourite destinations in Kent this time of year ,  i headed there  via Wallend Marsh , on route i picked out a distant Barn Owl drifting over a field near the Royal Military canal , i managed to locate the huge herd of wild swans on the marsh and enjoyed distant views of approx 90 Bewicks Swans  , i also managed to pick out one adult Whooper Swan although there were meant to be two adults present , still i was happy with one. 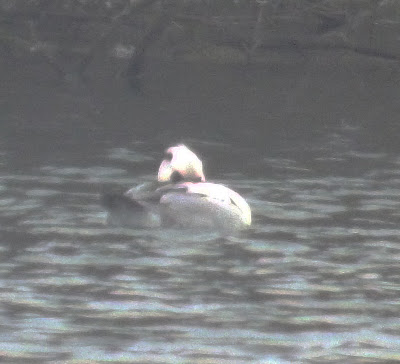 From Wallend Marsh i headed off to Dungeness  and i soon picked out 3 Great White Egrets  from the roadside , there were hundreds of ducks on the Arc pits , mainly Gadwall , Shoveler and Teal plus several female Goldeneye  were scattered about , i also saw one drake Smew and approx 4 Redheads during the course of the day , i carried on my journey and ended up by the fishing boats looking for the Glaucous Gull but my luck run out with this one today , however i did see a very impressive adult winter Med Gull fly over my head , the sea was very productive with hundreds of Razorbill , Guillemot and Great Crested Grebes either on the sea or flying by , there were lesser numbers of Gannet , Kittiwake and Red Throated Divers but all were very close in . 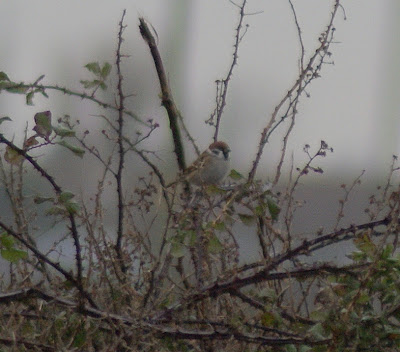 Tree Sparrow at the start of the entrance track .

The weather had turned really bad by half ten , strong on shore winds and rain plus it was pretty cold so i decided to head for the RSPB reserve and had some excellent views of Tree Sparrow at the start of the entrance track , when i reached the reserve car park i was greeted with this really smart Fox which was feeding under the bird feeders . 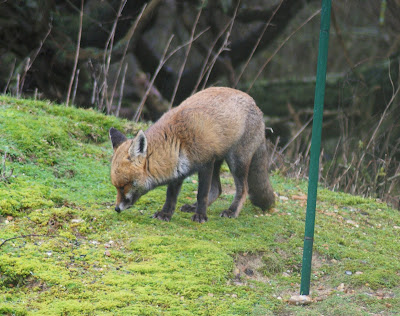 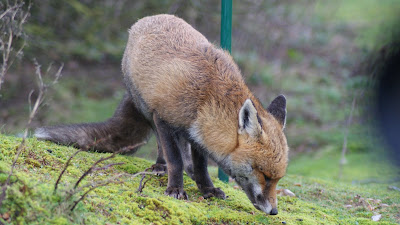 This Fox allowed me to get very close to it in the car , i could have reached out and stroked it , it looked quite healthy and fairly young , certainly not an adult Fox . i picked out a very brief Firecrest  in the bushes behind the feeders which was a nice bonus plus the usual Chaffinch , Greenfinch , Blue and Great Tit were well represented here , i spent another couple of hours around the reserve adding a few more year ticks here and there but the rain was making it very hard going so i decided to call it a day around 3 pm .

Posted by Robs Birding at 13:05 No comments: 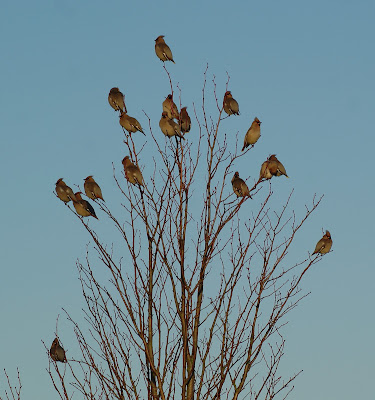 I started off my New Years birding at Tescos and was treated with 17 Waxwings to get my list of to a good start , i then headed of to Dungeness adding more common species as i went , i called into Wallend Marsh and had distant views of 10+ Bewicks Swans and yet another Waxwing . From here i went to Dungeness rspb reserve to get info on whats around , after checking the board i went and checked out Burrows pit from outside the hide and was soon onto 2 Redhead Smew which were amongst good numbers of the more regular ducks , whilst watching the Smew i was joined by another birder and pointed them out to him , then 3 Great White Egrets flew up together and then landed nearby and were soon joined by another bird making 4 in total , i then noticed a distant Egret flying towards us and i was amazed to see it was yet another Great White Egret making 5 in total , this bird also landed and i have managed a record shot of all 5 birds together .

I let the information centre know and another birder said he had seen 2 from the entrance track , which were obviously the same birds however it came out on the pager as 7 birds , i only ever saw 5 birds at anyone time and believe that to be the true number. I was really happy with this sighting and is the most i have seen together in the UK and beats my previous record of 2 at the same site last year. 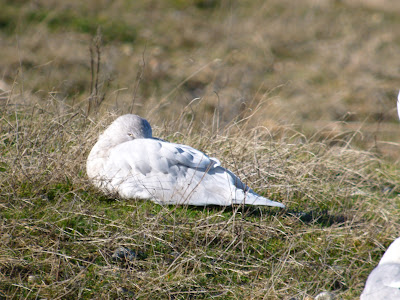 From here i headed off to the fishing boats but had time to check out the feeders by the entrance track and was delighted to see at least 15 Tree Sparrows , i arrived near the fishing boats and scanned through the Gulls but could not pick out the prize i was after , i ventured further down and soon come across the stunning looking white winged wonder 3rd winter Glaucous Gull . 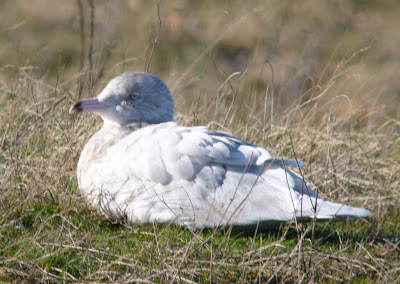 I enjoyed this bird for half an hour and then went to have a look out at sea and was pleased to see several Divers going by , mainly Red Throated but i had one close in Black Throated , there were plenty of Guillemots and Great Crested Grebes on the sea plus several Kittiwake were flying up and down the coast , my last destination of the day was Denge Marsh road , where i had distant views of a female Red Crested Pochard which would have shown well from the hide , plus there were 2 Marsh Harriers and a single Common Buzzard over head , and that more or less rounds up my day finishing on 60 species for the day .