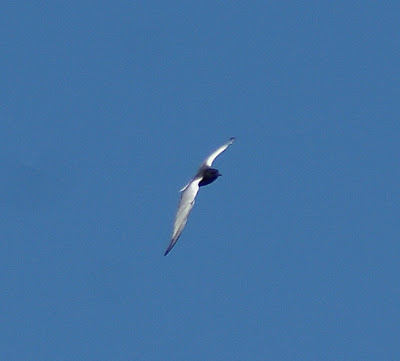 Firstly sorry about the cheesy title of this post ....lol , however on hearing news about 2 adult White Winged Terns  at Stodmarsh yesterday i couldn't resist going to see them , i have had a really long depressing week at work and these were the right medicine to cheer me up , Congratulations to Martyn Wilson who found these stunning birds , on his birthday too !! . 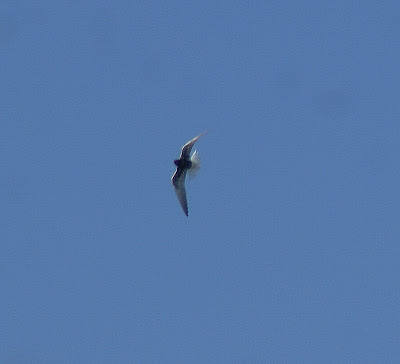 I met up with Martyn , Chidders , Marc  and Adam  along the Lampen wall overlooking the main lake where the 2 Terns put on an amazing display for us all flying directly over head at times , whilst we were watching the main attraction Marc Heath picked out a Sandwich Tern which is a real rarity in the Valley , there were several Common Terns nearby plus a good number of Hobbies zipping about , i watched these birds for approx an hour when Martyn , Chidders and Adam went off towards the Water meadows and i had loads to do at home , so a really enjoyable session with great company .
Posted by Robs Birding at 01:28 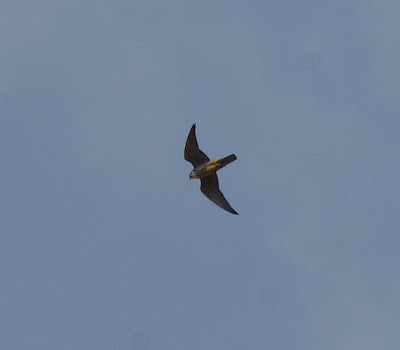 One of Many Hobby .

I spent a very enjoyable couple of hours at Grove Ferry yesterday morning granted i had missed the main birding event in the shape of  2 Honey Buzzards drifting over the reserve before i got there , however that did not dampen my spirits, on my way to the viewing ramp i heard then saw a smart Lesser Whitethroat right at the beginning of the path , i bumped into Martyn Wilson on the viewing ramp before he headed off to Collards Lake and he kindly informed whats around the reserve , whilst on the ramp Martyn picked out a Common Sandpiper flying low over the flood , this is only the 2 nd one i have seen this year , it did not take long for the first Hobby to appear with 4 birds right over head , really like these falcons and the views were amazing , although my photos dont do them any justice . 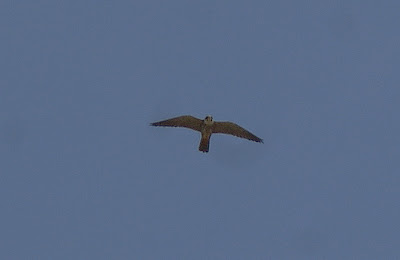 Marsh Harrier and Common Buzzard were added from the ramp before i headed of to the Paddocks and i instantly heard another Lesser Whitethroat  and with a bit of patience it eventually showed itself , i also heard a Turtle Dove " purring " but alas i could not locate it , its been a couple of years since i have had any type of view of these smart doves whereas years gone by they were quite plentiful , i could hear in the distance a Cuckoo then 2 birds flew right in front of me , i managed a photo , just ! 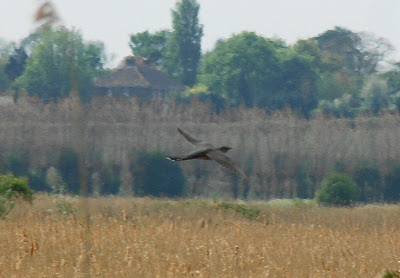 Brief view of a Cuckoo .

I continued my walk along the river where i saw a male Bullfinch in more or less the same area last time i did this walk , there were plenty of birds in song , mainly Cettis , Chiffchaff and Sedge Warblers  , a Green Woodpecker flew over my head and Hobby seemed to be everywhere , i counted 10 birds in the air at once but i would guess there were plenty more , i left the river walk and took the trail towards Harrions Drove but was put off going to the hide as a quite large party of non birding people were heading towards the hide so i cut back across towards the ramp , on route i had very brief views of some Bearded Tits which are always great to see but sadly they never gave themselves up to my camera , eventually i manged to pin point a very showy Sedge Warbler . 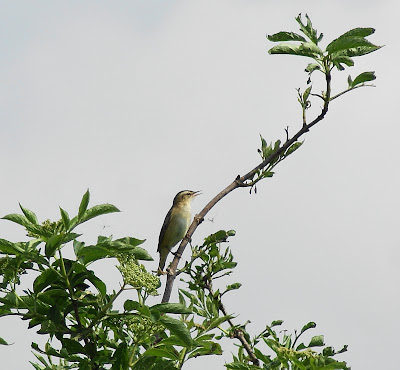 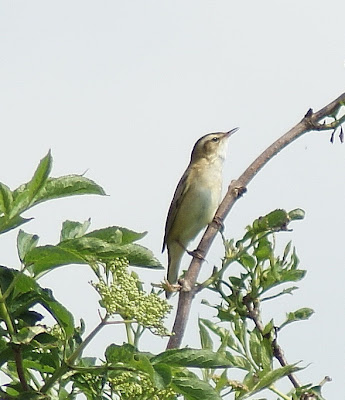 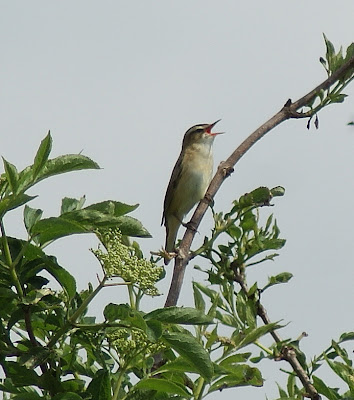 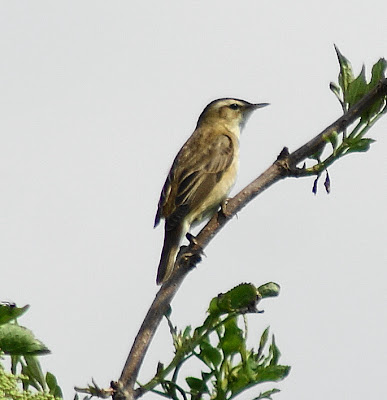 A really pleasant mornings birding in nice conditions was had here and i mustn't leave it so long before my next visit .

Nightjar in daylight....... Plus Squacco 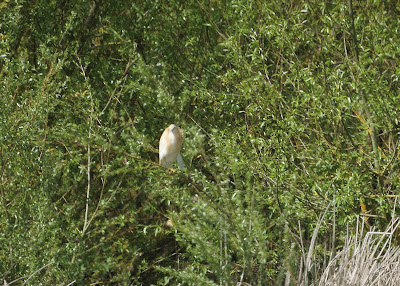 I  headed to Blagdon Lake in Somerset for the smart looking Squacco Heron which was  only my 2nd in the UK , i was straight on the bird when i arrived , these have to be one of my favourite herons , i carried on to the car park  , on my walk back i saw the Squacco flying off and luckily it landed in the nearby bushes where it was perched out in the open . 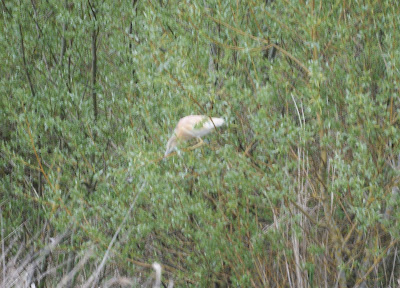 Squacco climbing through the bushes .

The Squacco Heron spent alot of the time preening giving me a real treat of its fine plumage and every now and again it would spread its brilliant white wings which was stunning to see , it also had a curious habit of breaking off reed steams and then just dropping them , i enjoyed watching this bird for over an hour plus there were several Reed Warblers nearby being very vocal , i also saw a Great Spotted Woodpecker flying over head and landing in a nearby tree , there were up to 3 Common Buzzards soaring over head . 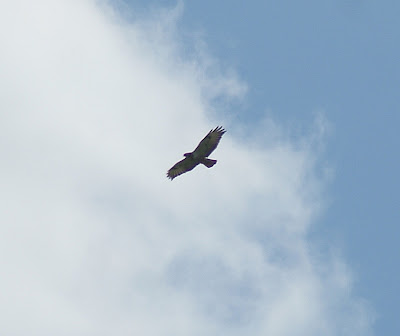 I had heard news  of a Nightjar  perched at the bottom of a rose bush in Pagham and as it was on my route back i headed off to Pagham , i arrived in good time and after a little confusion of where to go i finally found my self on the right path and was soon enjoying fantastic views of a Nightjar in daylight . 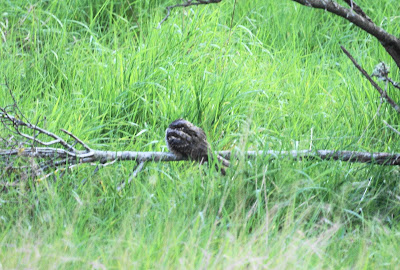 Stunning view of a Nightjar .

This is by far the best view of a Nightjar i have ever had , i have seen them many times over the years . even perched on tree branches but never so close and in broad daylight , simply a stunning birding experience . 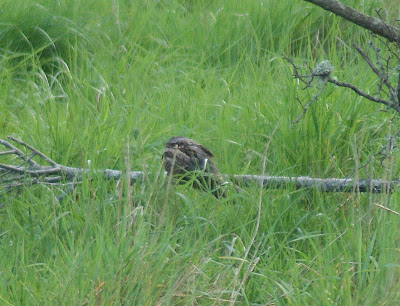 Another view of the Nightjar .

I also heard Cettis Warbler plus had some brief views of Reed Warbler , i also heard a distant Corn Bunting , a really great day out . 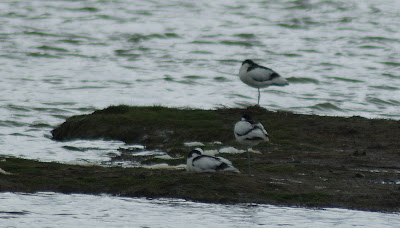 I spent a couple of hours at Oare Marshes yesterday morning , the weather wasn't that great , quite windy and overcast , i arrived on site and joined the already assembled birders in the hope of seeing the Grasshopper Warbler that had recently made Oare its home , i instantly heard it " reeling " but could not locate the bird , they are prone to turn their heads when reeling giving you a false sense of their whereabouts , however this bird seems to show itself out in the open when its reeling , alas not today mainly because of the windy conditions. 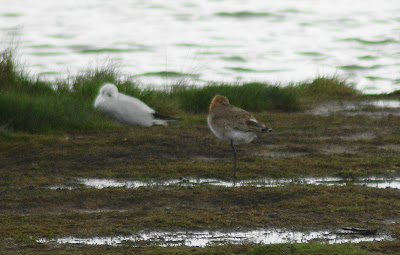 I went off to check the East flood and soon i was watching a Common Sandpiper which i needed for my year list ,  i also noticed a close Black Tailed Godwit which only had 1 and half legs poor thing , it  was missing the lower part of its right leg and foot , hopefully this wont hinder the bird to much , there were quite a few Avocets nearby but no small waders of any note .

I made my way back to the Gropper , not long after i got back i heard a Nightingale ,  first one i have heard this year plus the second new bird for me at Oare with Grasshopper Warbler being my first OMST , the Gropper started reeling again and i briefly saw it low down in the grass . 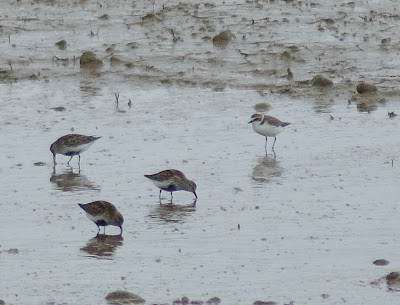 A really productive few hours spent at Rye and Dungeness produced a hatful of year ticks , 13 in total and some especially good looking waders in various plumage ,  my first destination was Rye Harbour and i walked towards the new saltmarsh which is a wader magnet , on my approach i met some birders leaving who had seen the Kentish Plover earlier but had lost it to view about 20 mins ago ,  always the optimist i ploughed on and begun my search , there were waders everywhere , 3 summer plumage Knot caught the eye as did several summer plumage Bar Tailed Godwits , there were at least 200 Ringed Plover and at least 250 to 300 Dunlin  , but no Kentish , i kept scanning and checking then all of a sudden i saw the Kentish Plover right in front of me on the scrape . 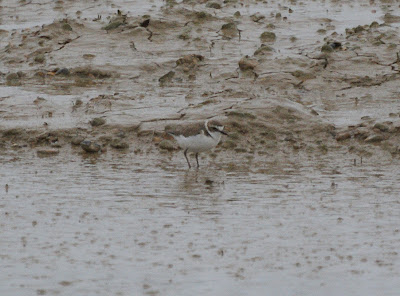 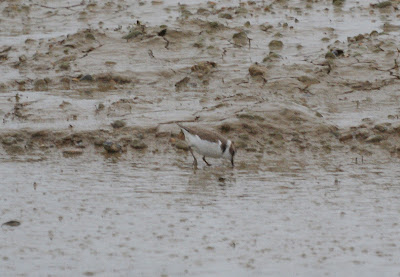 This is a really smart wader , you could make out the slightly black breast marking , white collar was very evident , black legs and bill , it has a slight supercillium which was slightly buff near the ear coverts , slightly overall paler colouration compared to the Ringed Plovers , i also was lucky enough to see a partially moulting Curlew Sandpiper plus several Little Ringed Plovers .

From here i headed over to the trapping area at Dungeness and was treated to several smart looking Wheatears and a super looking male Whinchat which was being chased around by a Stonechat , there were 2 Common Redstarts plus approx 10 Common Whitethroats , so after a much welcome mug of coffee and bacon roll  i had a quick look out to sea which did not produce much the highlights being lots of Common Terns and half a dozen Whimbrel flew through , i decided to head back to Rye and had another look at the Kentish i also added 2 Little Stints and a Little Tern was delightful to see .