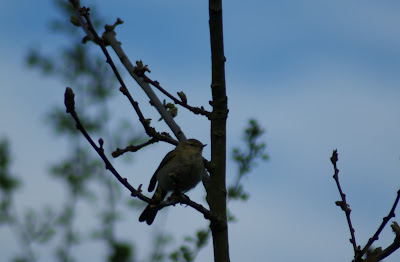 When i was at work yesterday the pager alerted me to the news of a Iberian Chiffchaff at Walderslade in Kent singing and showing well , i have never seen one before and i was on my way to Southampton on an over night delivery EEK !! , will it stay or just pass through ????

Fortunately it stayed and i managed to get to the site at about 6.45 pm tonight , i met a birder on the way out and he said it was still around and showing well , so of i set and found roughly the area this guy had told me about , i heard Chiffchaff on the way in and then i heard the unmistakable call of the Iberian Chiffchaff and whats more i had it all to myself , eventually it appeared on a bare ash tree more or less in front of me and started singing , i got some pictures : 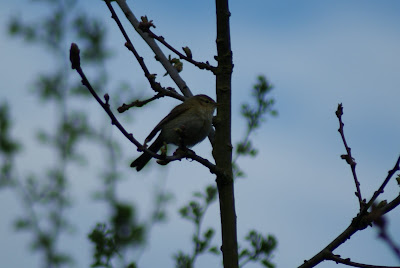 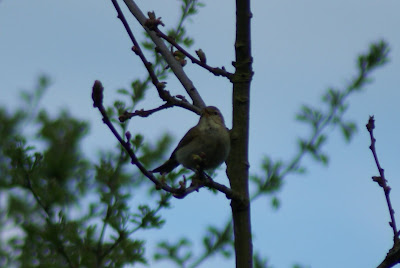 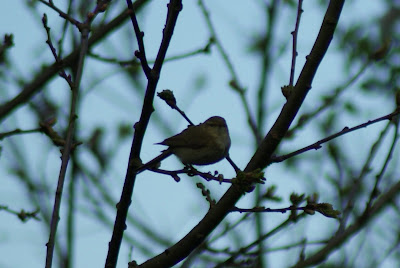 Iberian Chiffchaff in flight , spooked by a noisy dog walker . 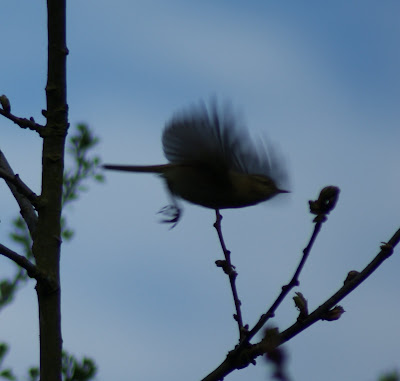 It did seem rather long tailed but that could be because it seemed to be missing some under tail coverts ?? the song / call is very diagnostic in the id of this species in my opinion , still a tricky bird to catch up with and i am very pleased to have seen one at last especially in Kent .
Posted by Robs Birding at 14:23 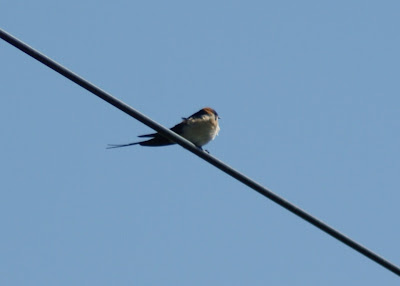 News of this superb bird at Minster near Ramsgate proved to good to resist , i got down there at about 10 am and parked in the fishermans car park, and was greeted with plenty of bird song , Whitethroat , Chiffchaff , Willow Warbler and Cettis Warbler were singing there hearts out, but there was not a swallow to be seen, or any other birders to get any info from, although i could see the sewage works there is no access to it and i searched round to try and find a vantage point to see over it .

Eventually i come across to a small muddy mound and stood on this and at last i found some Swallows , there were approx 15 Swallows and 3 House Martins ( year tick ) and after about 3 mins the  Red-Rumped Swallow put in an appearance , its  rump clearly visable, longer tail streamers and pale buff collar were all clearly seen , its overall appearance was much more slender than Barn Swallow , it was showing well but was just to far to get a picture , i then drove round to the other side of the sewage works and bumped into another birder who hadn't seen it and whilst i was giving him directions it flew over us and landed on the wires just to the right of where we were standing . 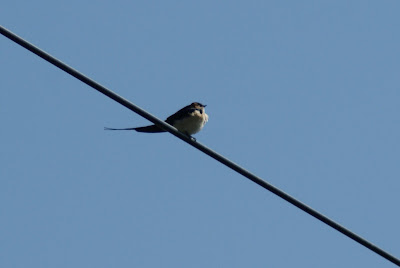 Although i have seen Red-Rumped Swallow in Kent before this was a new Thanet tick for me and i am only 6 away from 200 species in this area now .
Here are some more record shots , sadly i never got any clear shots of its rump . 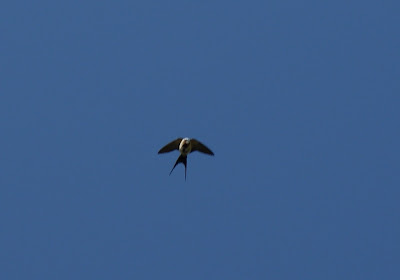 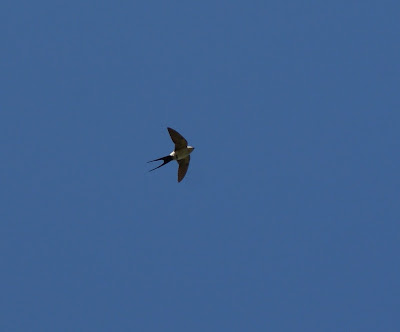 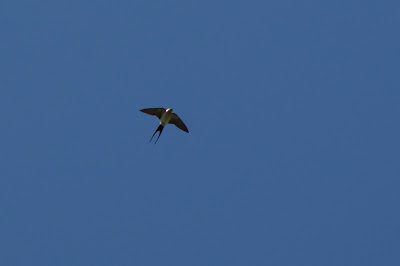 Other birds of note were : Common Buzzard , 2 Cuckoo and 1 Yellow Wagtail .
Posted by Robs Birding at 08:09

My target bird at Clowes wood was Common Crossbill , as local birders had been seeing them there on a regular basis's and to rub it in they have been getting decent photos of them too ! 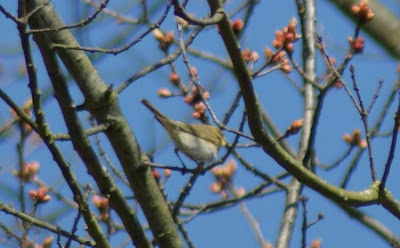 I was late getting there not arriving until 10.30 ish and the car park was full, damn either loads of dog walkers or god knows what , i instantly heard then saw Willow Warbler which was a welcome year tick , so of i set to the area roughly where the Crossbills had been seen , plenty of bird song greeted me in the form of Chiffchaff , Willow Warbler and Blackcap but no sign of any Crossbills .

I saw Goldcrest and approx 7 Goldfinch flew over plus distant Great Spotted Woodpecker calling , i then bumped into another birder who had just seen a Nightingale further along the path but he said there was an army of ramblers heading that way ( hence all the cars in the car park ) , whilst chatting 2 more birders in the hunt for Crossbills turned up , Mike Gould and Steve Ashton, and we teamed up in are pursuit and headed of to where the Nightingale had last been seen , on nearing the location we could hear it calling , we left Steve who was busy photographing Willow Warbler .

We reached the location of the Nightingale but it had stopped singing so Mike played the song on his mobile and within seconds the Nightingale flew from behind us and showed really well for a good 30 mins , i even managed half decent pics myself ! 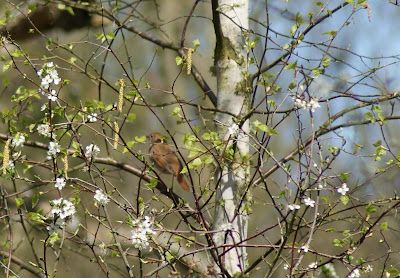 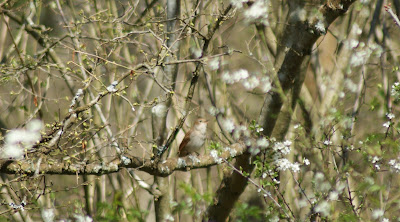 I was really pleased with adding this glorious songster to my year list , normally you only hear or get a brief glimpse but this one showed really well , and more than made up for missing the Crossbills .

Grove Ferry was my next stop to see if i could catch up on some more migrants and as i approached the Ramp i encounted my 3rd year tick of the day with a Whitethroat which gave it self up after a couple of minutes of singing deep inside a bramble bush , this was very quickly followed by my first Sand Martins (100 + ) of the year , not a bad start.

I spent a little time at the Ramp but only added 2 Ringed Plovers and all the regular ducks you would expect to see there , i then headed of to the water meadows on route there i had a brief view of a Cetti's and heard another 15+ also Sedge and Chiffchaff were very vocal i also saw 3 Common Swifts which were also new for the year and quite early too , on reaching the water meadows i saw 3 Black-tailed Godwits plus 6 Green Sandpipers which were my fourth year tick at this site , 2 more Swifts flew over and a Little Egret put in an appearance , on the way back i had a really pleasant encounter with this Long-Tailed Tit . 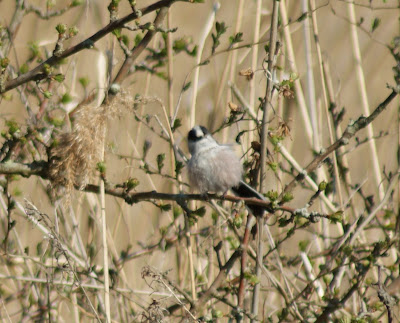 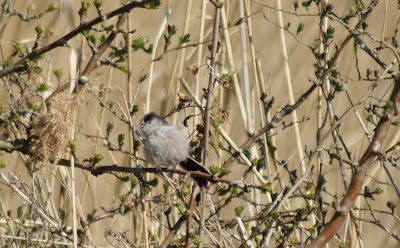 A really pleasant day with six year ticks making it all worth while .
Posted by Robs Birding at 11:28

I decided to do some local birding today and ended up at Grove Ferry at about 10.30am in the hope of catching up on some spring migrants , rather overcast with a fresh wind but the sun was trying to break through.
At the car park there were the usual birds around the feeders , Great tit , Blue tit and so on , i met the guy who was there flogging " In Focus  " gear and whilst chatting to him i caught sight of my first migrants in the shape of 3 Swallows , i took a picture not very good but if you click on it the dot does turn into a Swallow , honest !!! 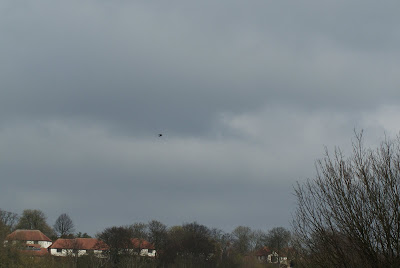 After this i headed for the " Ramp " and soon added Sedge Warbler to my year list and all the usual ducks were seen out on the flood although there seemed to be quite a high number of Gadwall , 3 more Swallows flew by and there was at least 2 Cettis warblers singing near by , i spent roughly 30 mins here and added Marsh Harrier and Sparrowhawk to my days total , i then headed of towards the Marsh hide and added 2 more Sedge Warblers and i was soon adding my third year tick of the day in the shape of a fine male Blackcap , there were several Marsh Harriers up in the air , i counted 4 males and 3 females and even managed some photos : 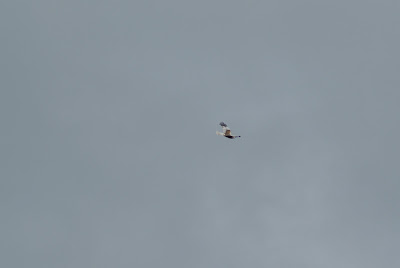 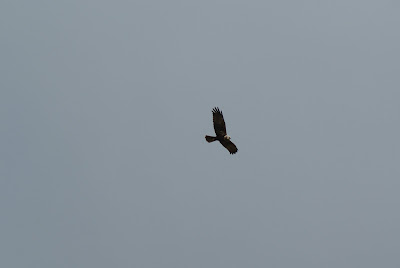 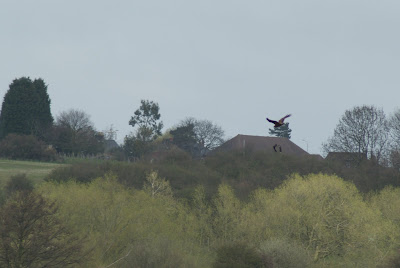 Female Marsh Harrier  being harassed by a Lapwing.

After enjoying prolonged views of these superb birds of prey i then headed off towards an area called the Ox Bow in the search for Water pipit but after a long search and scan of the area i had no joy , although i did add my final year tick of the day in a fine colourful Yellow Wagtail , my main counts were : Cettis Warbler 10 heard , Chiffchaff 5 heard , Sedge Warbler 1 seen plus 2 more heard ,  Blackcap 1 male ,Swallow 6 , Yellow Wagtail 1 , Sparrowhawk 1 and Marsh Harrier 4 males and 3 females , i finally got back to my old banger at 1.30pm having seen 49 species plus 2 Peacock butterflies and hearing several Marsh Frogs .
Posted by Robs Birding at 12:53

Having been quite unwell this past week and over easter all my plans for birding trips were out of the window , so feeling rather down and bored to death with not getting out things were looking kind of poor , then news of a female Kentish Plover on Sheppy came to my attention , should i go and risk my health even further or should i except that i will do no birding until next weekend at the earliest ????

Well Sunday came around and although still not 100 % right i was feeling abit better and whats more the Kentish was still lingering at Shellnesss , that's all the temptation i needed , so of i set and before long i was driving down the track that leads you to a car park just before Shellness , now anyone who has ever been there knows how rough that track is , my god it was like driving through the Serengeti !!!!

Sorry got abit carried away there ( some people would think that would be a good idea ! ) anyhow once on site i headed towards the blockhouse and soon located a small party of 6 Ringed Plovers and a scattering of Dunlin and also a very smart looking female KENTISH PLOVER , they are very distinctive waders , incomplete breast band , blackish legs , very pale in appearance compared to the Ringed that were present , quite a dumpy looking wader large headed which was also quite pale in appearance , a really good bird to add to my year list and also it was a patch tick .
Posted by Robs Birding at 02:54