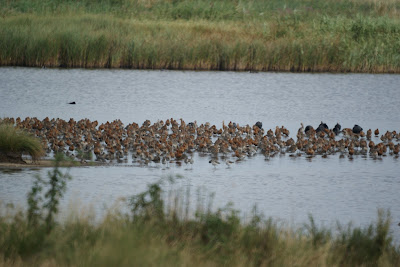 Mixed flock of Black-Tailed Godwits & Redshank plus 5 Greenshank in foreground.

I am by no means an avid " patch watcher " but when i am not off twitching some rarity in Kent or elsewhere i often come to this superb reserve , Oare marshes is one of the best sites in Kent (in my opinion) to get up close and personal to waders and wildfowl and if i was any good a photography my photos would show that , the above picture is part of a massive mixed flock of Black-Tailed Godwits and Redshank in various plumage's , i roughly estimated there was 1000 + Godwits and 100 + Redshanks mixed in , i also had very good views of 35+ Golden Plover in superb plumage . I had a walk around the East flood and heard and saw several BeardedTits and Reed Warblers were quite vocal too, as i walked past the sea watching hide that over looks the Swale i heard then saw my first patch tick of the morning a Grey Wagtail which was also a year tick for me,
it flew over my head and made its way down the creek towards the village.

I continued my walk all the time more and more Godwits were flying in , i eventually made my way round the bend and soon heard a very vocal Corn Bunting , to my surprise when i checked my records when i got home this was also a Patch tick for me !

I continued along the path and decided to sit on a bench not far from the hide that overlooks the East flood , this gave me a better vantage point to check the flood and i was soon year ticking a Common Sandpiper , then i heard a silvia warbler " ticking " in the bushes behind me and after a couple of minutes it gave its self up and i was Patch and year ticking Lesser Whitethroat . 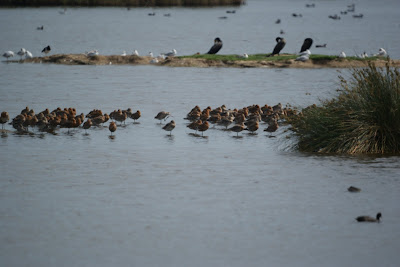 I continued checking out the flood and saw a couple of Common Snipe flying around in there mad way, and soon 5 Greenshank flew in to join the Godwits , 2 Dunlin and 5 Avocets joined in the ever growing mass of waders  and i finished my trip here on 13 species of wader , not bad for 2 hours of birding !!!
Posted by Robs Birding at 04:18 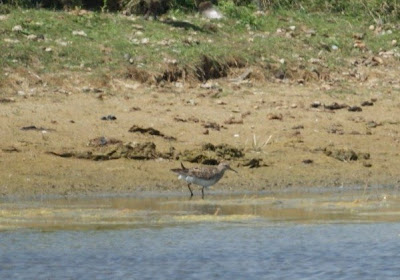 News of the Pectoral Sandpiper at Restharrow scrape in Sandwich bay was positive and i made my way there just after 1pm and was soon watching this delightful wader , it was actively feeding and walking / running around a smallish island the whole time , short yellowish bill which was slightly curved at the tip , yellowish/ brown legs , very defined streaked breast band , white belly buff fringes on coverts were all easily seen .

It took to the air once and the dark centered rump/ tail was clearly visible , other birds seen were : juv. Little Ringed Plover , Lapwing , Oystercatcher ,Wigeon,  House and Sand Martins were in good numbers there was up to 3 Yellow Wagtails and plenty of vocal Corn Buntings nearby . This was a very much welcome year tick for me . 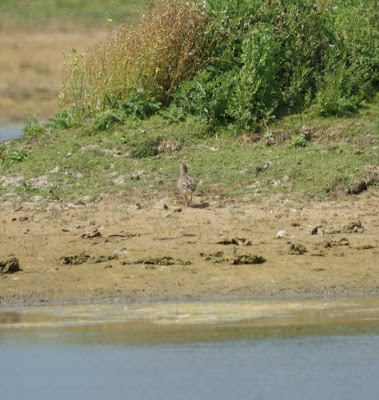 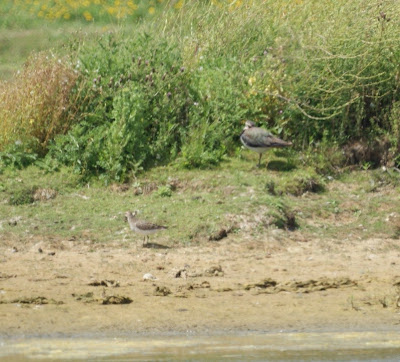 Posted by Robs Birding at 10:35 No comments: 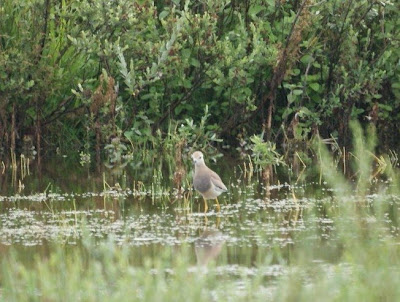 Having twitched the White-tailed plover on Saturday i could not believe my eyes when the pager went mad informing me that it had re-located at Dungeness on the ARC pits , a first record for Kent , i just had to go for it again and what a treat , it was far closer than when i saw it at Slimbridge , quite simply stunning to see at such a close range , long yellow legs , pale head were all easily seen , it was much more active as well constantly preening giving superb views of its very white tail , i also saw it in flight a couple of times , which was just amazing to see , this much traveled bird is a delight and rates as my fav bird of the year so far ( watch this space) .
I also managed to have better views of the Purple Herons this time , still only flight views but more prolonged than the time before , so all in all a great days birding   !! 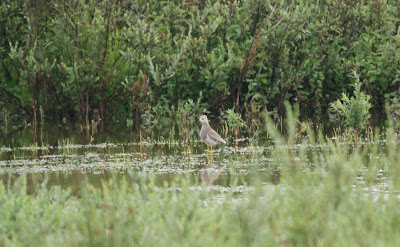 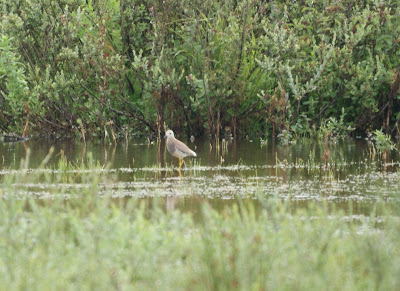 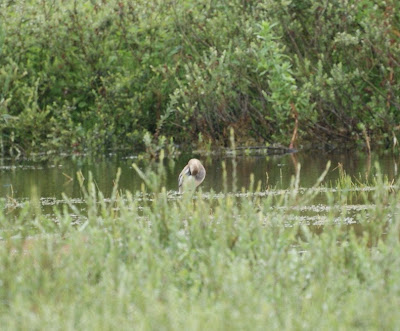 Posted by Robs Birding at 11:06 No comments:

TWO IN ONE DAY

Having missed the Rainham White -tailed plover ( work what a pain ) i was more than a little relieved when news broke on Friday 9th of it re appearing at Slimbridge , i had already planned to go for the long staying Gull-billed tern near Exeter on the Saturday 10th so the wheels were put in motion to try for both , i picked up Kevin Mc in Surrey on route and we were soon heading of on along journey  to try a bag these two difficult birds , Kevin had already seen the white-tailed at Rainham so was quite relaxed about it .

We stopped at the services on the M4 near junction 18 for a quick toilet stop and the news on the pager well shall we say was not that encouraging , basically the white tailed had not been seen by at 8.50am and there was no news on the Gull-billed , i suggested we carry on and go straight to the Gull-billed site as i felt pretty confident that it would still be about and Kevin agreed , so of we set , any how we had gone about 20 miles down the M5 when the pager sounded off and the news was positive the white tailed had been re found at Slimbridge , GREAT, a quick change in direction and with in an hour we were on site looking at this stunning White-tailed plover , this was a British tick for me , i had seen them in Israel back in 1989 , but even so i was pretty relived to see it , i have some photos to post in my next post .

We stayed for about an hour getting reasonable views then we decided we should head off for the Gull-billed , the journey there was horrendous , there had been a multi vehicle accident on route and we were stuck in traffic for a good hour ( seemed like 5 hours )  well eventually we arrived at Exton railway and were soon trying to locate this tricky tern , i was scanning through my scope and caught sight of a tern which was quite distant and then dipped out of view before anyone else could get on it , i did nt get enough on it to be sure which was a little frustrating to be honest , anyhow about 5 to 10 minutes later Kevin and another birder located the Gull-Billed Tern and i was soon adding it to my British list , it was quite stocky in appearance black bill and legs , the tail was only ever so lightly forked and i am pretty sure it was i saw earlier , most of the time it was quite distant but eventually it came a fraction closer and settled on the mud flats near some cormorants we watched for about 45 mins, it was just abit to far for a photo , other birds of any real note were a few  Black-tailed godwits is nice summer plumage we also had 1 Red Kite and up to 7 Common Buzzards on route .
Posted by Robs Birding at 10:46 No comments: