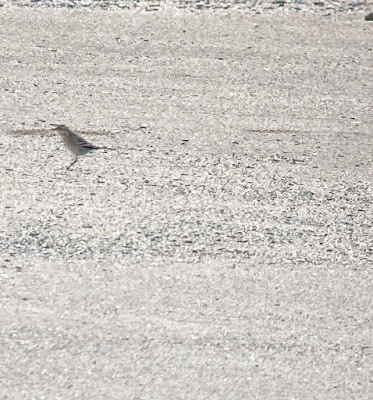 Citrine Wagtail 1st winter
Today we decided to head to Norwick on Unst to try and see the 1st winter Citrine Wagtail which would be a lifer for PG, we arrived at Norwick and scanned the beach for the Citrine Wagtail but alas there was no sign of it, i decided to leave RR & PG and go off and check the crop fields & bushes near Valaeye.
This proved to be a good decision as i had great views of a Marsh Warbler & Lesser Whitethroat (which had both been reported earlier) plus there were lots of Brambling & Chaffinch in the crop fields.
As i was heading back to tell RR & PG i could see them dashing off in the opposite direction !!
The Citrine Wagtail had been relocated further up the beach, i eventually joined up with them and had great scope views of this 1st winter Citrine Wagtail. 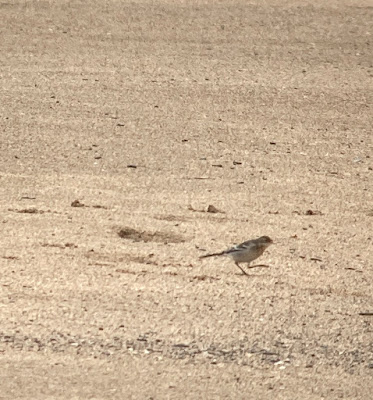 1st winter Citrine Wagtail.
I only managed poor record digi scope photos of this bird sadly, after enjoying the Citrine Wagtail for quite sometime we headed off to try and see the Marsh Warbler i had seen earlier and luckily it was still favouring the same group of bushes. 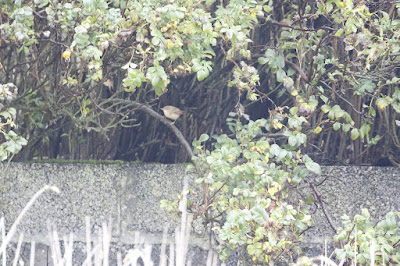 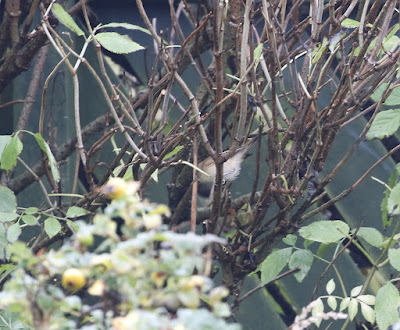 Marsh Warbler.
We also had brief views of  a Yellow Browed Warbler here to, we spent alot of time around Norwick adding Blackcap, Willow Warbler , Wheatear & Song Thrush.
Then we were told that there was a Little Bunting showing every now & again in the next crop field further along from where we were standing, so PG & myself went to look for this whilst RR stayed to try and locate a Common Rosefinch.
Whilst waiting for the Little Bunting to show i saw a Bluethroat fly up from the crop field towards me and then drop down out of sight, i called out to PG  who missed it and at the same time the Little Bunting appeared on the wire fence flushed by the Bluethroat which showed very well. 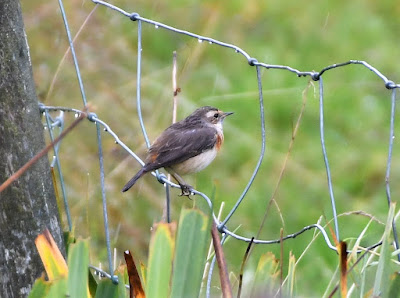 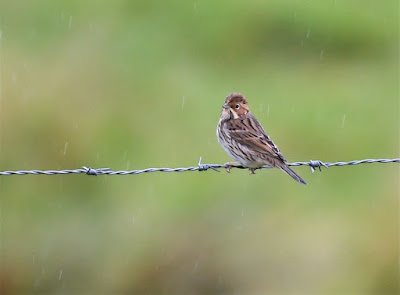 Little Bunting Photo by Paul Frost.
Sadly i never managed a photo of either bird but thankfully Paul Frost got  cracking photo's of both the Bluethroat & Little Bunting which he has kindly let me use on my Blog, Thankyou Paul.
We spent all day on Unst where it did not stop raining the whole time, we added Merlin & 20+ Golden Plover on Lamba Nest and a very close flock of Twite at Skaw.
30th  SEPTEMBER
Day Six 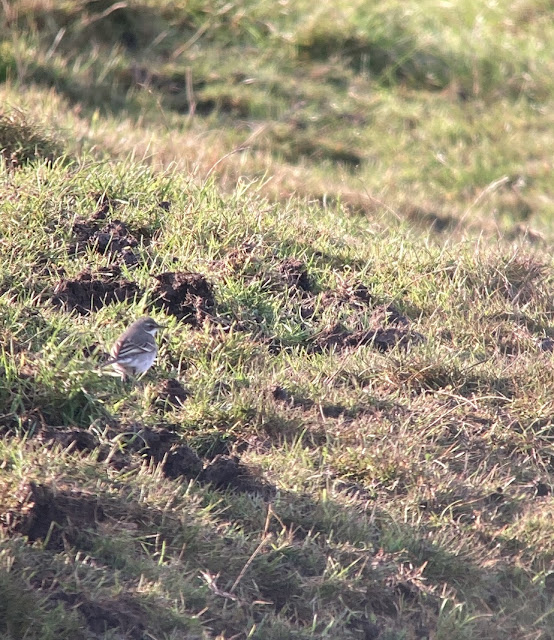 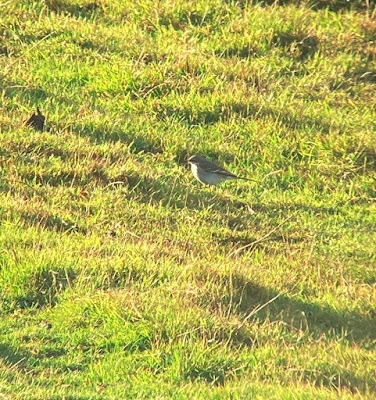 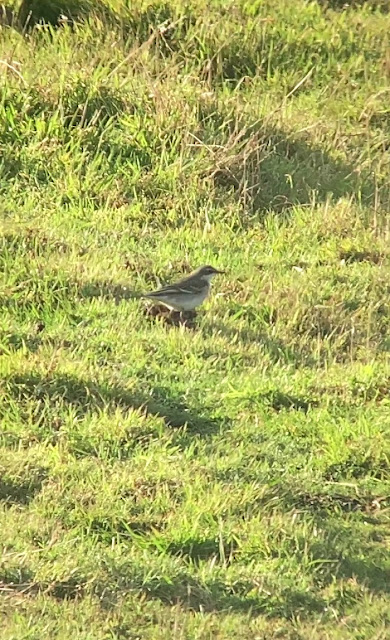 Eastern Yellow Wagtail.
Good numbers of Skylark & Meadow Pipit but nothing rare with them plus Swallow & Wheatear were seen here.
A scan across Loch Spiggie produced 2 Slavonian Grebes which were well picked out by RR plus several Whooper Swans were seen.
From here we headed to Geosetter where a stomp around only produced a couple of Chiffchaff , however in the field over the road there were several grey geese and a closer inspection produced 3 Tundra Bean Geese & 15+ Pink Footed Geese amongst the large flock of Greylag Geese. 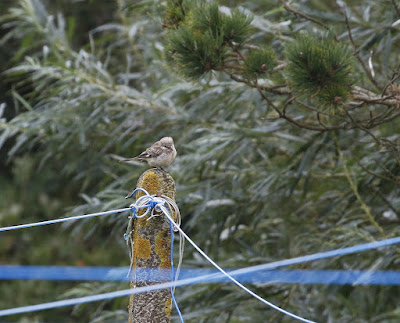 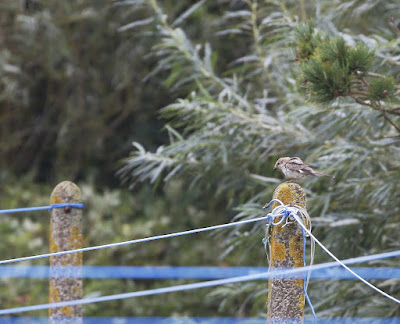 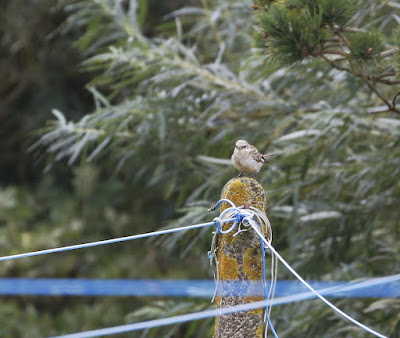 In back gardens.
The Woodchat Shrike was using back gardens washing lines & posts to perch on every so often affording very good scope views.
By this time it was raining non stop so headed back to our cottage having had a really great day. 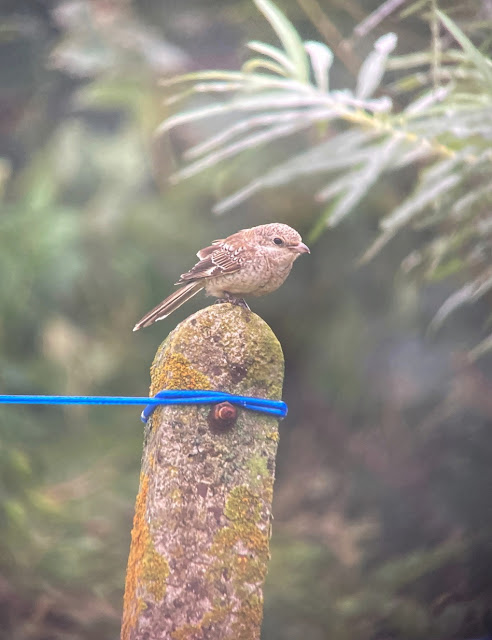 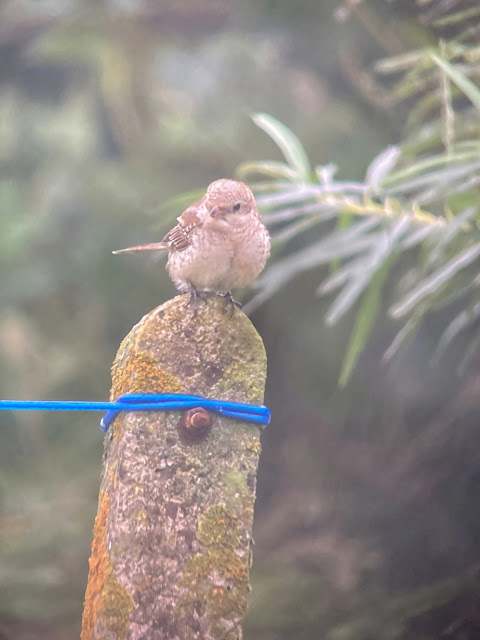 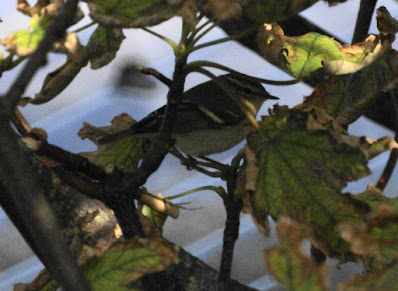 Yellow Browed Warbler.
Once again the weather was windy with rain, we decided to head to another area we hadn't been to on this trip, Dale of Walls, we heard and saw 3 Yellow Browed Warblers plus Wheatear, Wren & Sparrowhawk .
From here we headed to East Burra and had really great views of a 1st winter Red Backed Shrike with a supporting cast of Yellow browed Warbler & Pied Flycatcher. 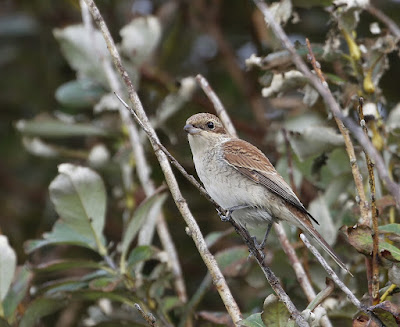 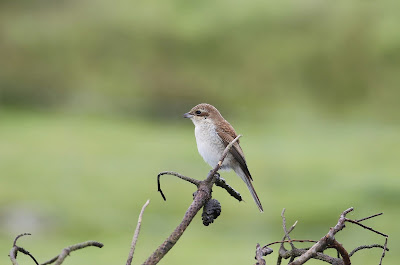 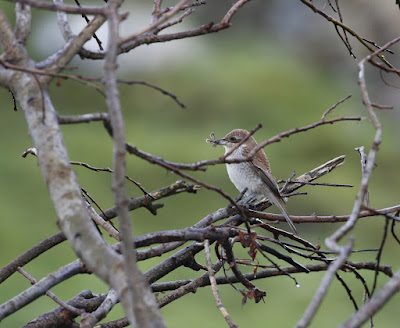 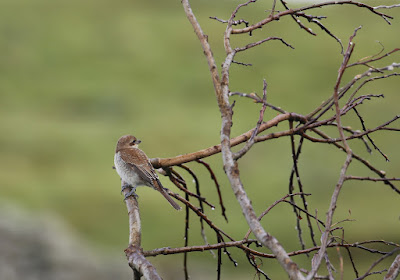 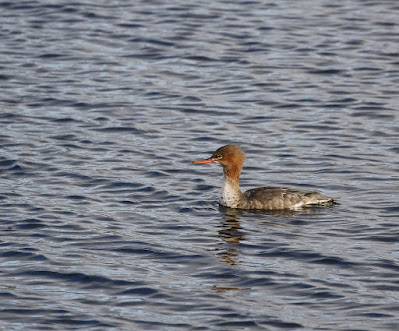 Red Breasted Merganser.
Our last day on Shetland started at Voe where we searched in vain for a RBF , we added Robin & Collared Dove to the trip list and had great views of Red Breasted Merganser in the harbour area.
On route south we saw the Great White Egret near Nestling and we had flight views of the elusive Barred Warbler at Wester Quarff.
We had a look around Sumborough and saw 2 Purple Sandpipers & 1 Sanderling. 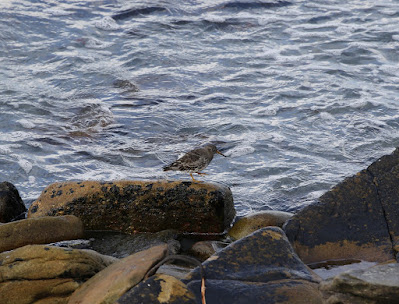 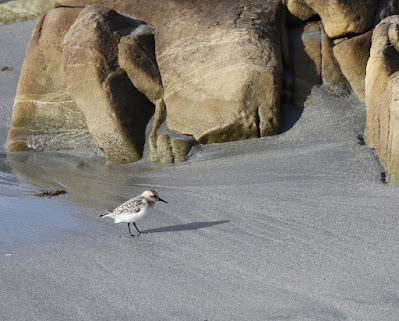 Sanderling.
After checking various other sites we ended up back at Noss farm for another look at the Eastern Yellow Wagtail. 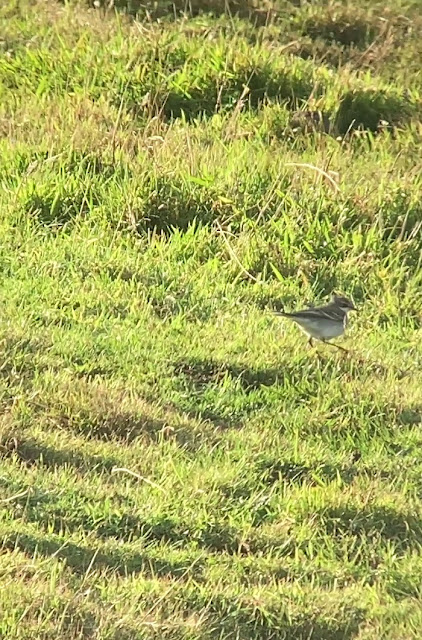 Eastern Yellow Wagtail.
We were told that a Jack Snipe was also present and after some searching PG relocated the Jack Snipe which showed well and was great to see. 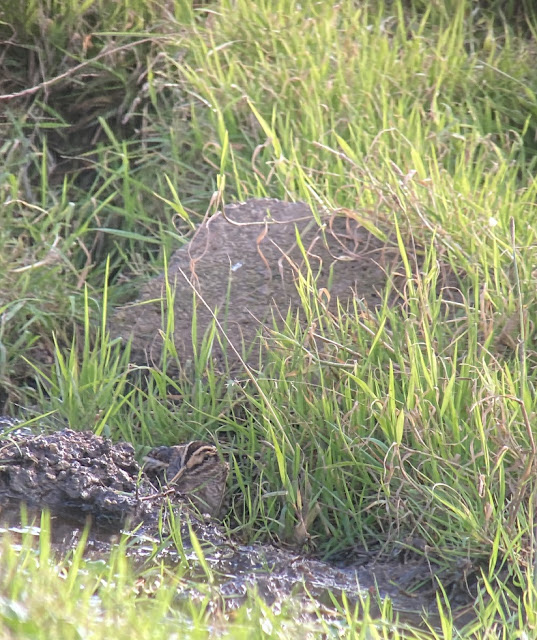 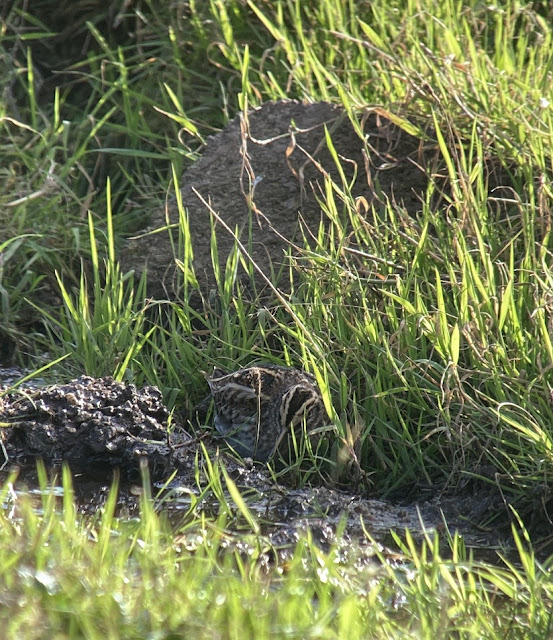 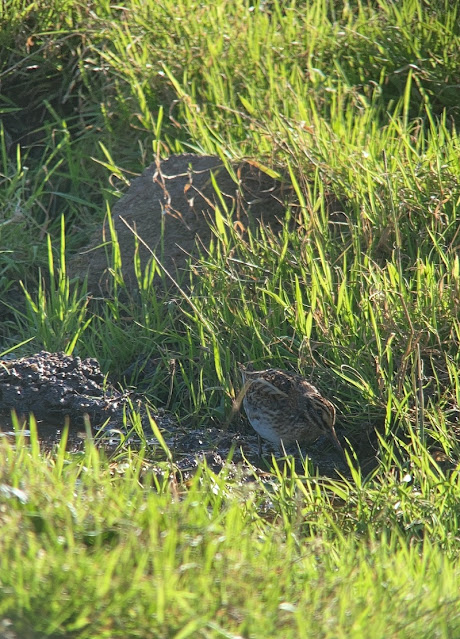 Jack Snipe.
We ended the trip at East Burra where once again we had good views of the Red Backed Shrike & both the Yellow browed Warbler & Pied Flycatcher were also seen & heard. 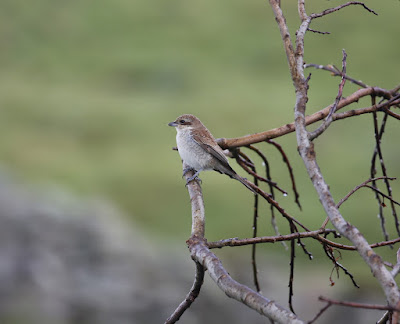 Red Backed Shrike.
So that concludes my trip to Shetland for another year ,a really great trip in great company and plenty of great birds seen,  no lifers this year but plenty of new birds for my Bird year list, here are the final totals :
HOLIDAY TRIP TOTAL :  95
YEAR TICKS  :  22
LIFERS  :  0
SHETLAND TICKS :  18